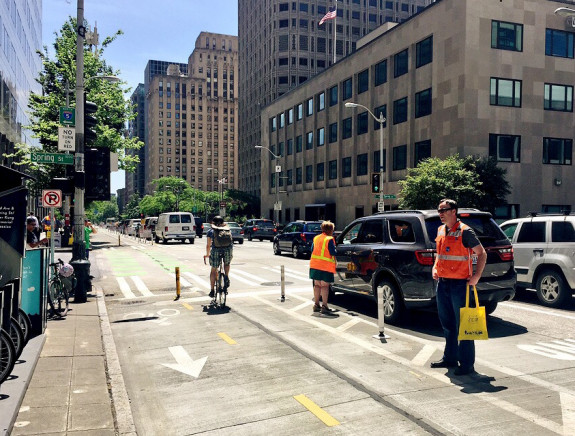 Most people follow the rules on 2nd Ave. Most people biking stop when the bike signal is red, and most people turning left obey the red arrow and wait their turn.

Unfortunately, most isn’t good enough, and there are far too many people still turning across the bike lanes when people on bikes have the green. While we have reported previously on how to make the traffic signals less confusing (hanging signals over each lane would help), many of those turning know they’re not supposed to and just don’t care. Police enforcement may be the only way to change their behavior.

But what about all those people who are doing their part to make the street work? Can the carrot be as effective as the stick? That’s what the Seattle Departments of Transportation is hoping for with their “re-enforcement patrols” this week.

Staff and volunteers from Pronto Cycle Share and Cascade Bicycle Club were out on 2nd Ave Thursday afternoon giving opposite tickets: $5 Starbucks gift cards for following the law. 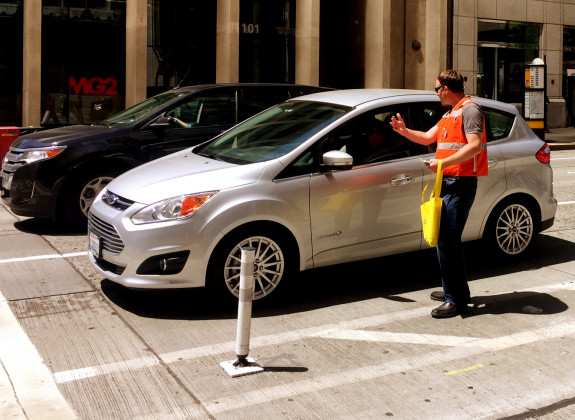 “Woah, that was amazing! You turned on your blinker and stopped at the red light, and you aren’t on your phone,” SDOT’s Jim Curtin told one person waiting for the light before handing a gift card and brochure about Vision Zero through her car window.

Staff and volunteers were also giving cards to people biking and walking who stopped for their respective signals.

The action was the second of three this week. Wednesday, staff were at West Seattle’s Arbor Heights/K-5 STEM School rewarding parents dropping kids off and, of course, the kids themselves for being safe (coffee is yucky, so the kids got glow-in-the-dark reflective key chains, coloring books and crayons).

All the rewards were funded by a grant.

The re-enforcement patrols will be on the west side of the Fremont Bridge tomorrow morning from 8–9 a.m., so be on your best behavior and they might buy you coffee. And maybe if you’re all really, really good, SDOT will buy gift cards for a good coffee shop next time :-)

This entry was posted in news and tagged 2nd ave, re-enforcement patrols, sdot. Bookmark the permalink.