But the city could be setting up a very serious problem, exposing scooter riders to confusing laws and creating a big new opportunity for racially biased policing. The city is effectively prepared to punish individual users for the city’s own failure to build safe streets.

As we reported yesterday, Ordinance 119867 would also amend Seattle’s city code to allow electric scooter use on sidewalks only if “there is no alternative for a motorized foot scooter to travel over a sidewalk that is part of a bicycle or pedestrian path.” The intention here is to allow sidewalk riding on key routes like over the Fremont and Montlake Bridges where there is no feasible alternative, but it’s very squishy and will be confusing in real life.

The language seems to be pulled almost word-for-word from state law and city code updates made a few years back that allowed e-bikes in bike lanes and on paths. Though most e-bikes are mostly allowed anywhere bikes are allowed, rarer and higher-speed “Class 3” e-bikes capable of assisted power beyond 20 mph are not allowed on sidewalks “unless there is no alternative to travel over a sidewalk as part of a bicycle or pedestrian path.” This language has posed confusion for Class 3 e-bike users, but the problem wasn’t massive because there are not many of those bikes around and because there is really no way for an observer (like a police officer) to know which class an e-bike belongs to without measuring its assisted top speed or seeing the regulation sticker if there is one. So Class 3 e-bike users have just sort of existed in legal limbo with very little chance of facing enforcement unless they do something obviously dangerous (contact me if you know of a case).

But electric scooters are a totally different story. They are very easy to identify and there may soon be thousands of them on the streets available for rent in addition to the growing number of people who own them. So the sloppy language here will not be a marginal problem, and the City Council and SDOT needs to carefully consider the effects of this law.

How is a regular user (or a police officer) supposed to determine when a sidewalk user has “no alternative.” Who gets to decide whether an alternative exists or whether a stretch of sidewalk is “part of a bicycle or pedestrian path?” They often look exactly the same: 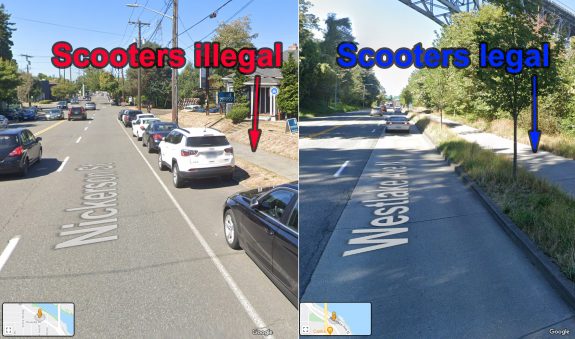 These images are just a couple blocks from each other.

And how is a “pedestrian path” different from a “sidewalk?” The terms have different legal definitions, but practically nobody is going to know the difference in the real world. I’ve been writing this blog for a decade, and even I had never read the legal definition of a sidewalk before. We tend to just call all paths you walk on a “sidewalk” unless it’s obviously a trail like the Burke-Gilman Trail. But this law will somehow expect scooter users to know the difference.

It’s also not clear how anyone is expected to know what qualifies as a sidewalk with “no alternative.” If someone doesn’t consider riding a scooter in traffic on Lake City Way a viable option, can they scooter on the sidewalk? What if a police officer disagrees and says Lake City Way traffic is a perfectly fine option for riding a 15 mph electric scooter?

As we have seen with too many other discretionary traffic laws, police tend to use their discretion inequitably. Jaywalking tickets in Seattle go disproportionately to Black and Indigenous people, for example. Councilmember Lorena González has even considered an ordinance to address this problem:

I have an ordinance addressing this issue that is laying around my virtual office. Time to dust it off and introduce it? 🧐 https://t.co/wwSQX8rTyf

There is no reason to think sidewalk scootering enforcement would be different.

The city is also changing the law to allow electric scooters in bike lanes and on trails. That of course makes sense. But this also means that people who live in communities with fewer safe bike lanes will be more likely to end up on the sidewalk and exposed to enforcement. Seattle has long neglected to build safe bike infrastructure in Black and brown communities, but instead of righting that wrong, this law would double down on this historic and ongoing injustice.

The scooter share permit is trying to have it both ways. It has admirable equity goals, including a requirement that companies put at least 10% of scooters within “Environmental Justice Community Areas,” which make up about 10 percent of the city’s land. But these same neighborhoods are also home to streets with some of the city’s highest traffic injury and death rates, and that’s not an accident. It’s part of our city’s legacy of injustice.

By making it illegal to ride a scooter on sidewalks, where exactly does Seattle expect someone to ride? People on scooters in Rainier Valley are very likely to be headed somewhere on Rainier Ave or MLK Jr Way. Are they supposed to scooter in traffic on these streets? Look at this image and tell me where someone on a little 15 mph electric scooter is going to ride: 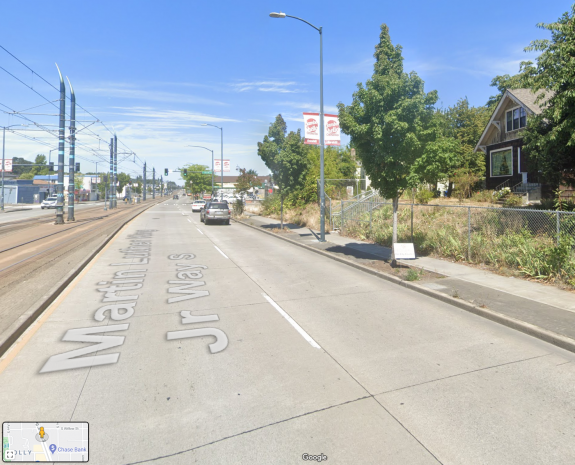 They are going to be on the sidewalk because that’s the only real choice the city has offered them. There is no bike lane. There is no shoulder. And until there is an actually safe option, how can we justify sending police to stop people who choose the sidewalk over the street?

The same goes for Rainier Ave and Aurora and Lake City Way and Holman Road and West Marginal Way and 1st Ave S and Airport Way. Sadly, this list could go on and on. Live in a neighborhood with neglected streets full of fast traffic? Too bad. Ride in the street with fast car and truck traffic or get a ticket (or worse) for being on the sidewalk.

This is not racial equity, and it’s not good policy.

Look, I understand that riding scooters and bikes on sidewalks is not good for people walking, especially people with disabilities. Sidewalk riding is also not good for people on scooters and bikes. But this problem is not the fault of people biking or riding scooters. It’s the city’s fault for prioritizing people driving cars and trucks over everyone else and for decades of failing to invest in safe infrastructure everywhere but especially in Black and brown communities. Don’t put this on the people who are just trying to get around as best they can with the options available. They didn’t make this mess.

We do not have a complete bike network in Seattle, and it’s not even close. And to make matters worse, Mayor Jenny Durkan has spent her time in office delaying and cutting the city’s effort to build our network. People have been advocating for quality bike lanes on Rainier or MLK for many years, but they still don’t exist and the mayor is in no rush to change that. So what option is Seattle giving people? The sidewalk of course.

Councilmember Tammy Morales brought up this problem during the Utilities and Transportation Committee meeting.

“I’m worried about Rainier Ave” said Morales. “If they can’t be on sidewalks, then where should they be?” There was no real answer to this question because the city’s plan just doesn’t offer one. And there is no easy answer. The idea of allowing scooters on sidewalks is problematic, and the city doesn’t have a complete bike network. So they’re just going to squeeze scooter users into a space between fast cars and people walking that simply does not exist.

Maybe there’s some kind of middle ground where people can be encouraged not to bike on the sidewalk or something, but Seattle hasn’t done the work to make a total sidewalk ban fair. Leaders have hopes that people using electric scooters can be part of a vision of a more environmentally friendly and equitable city, a city where more people can get around without driving cars. Seattle is also hoping that scooters can help more people in West Seattle get to and from transit or to make local trips without adding more cars to the peninsula’s streets while the West Seattle Bridge is out of commission. These are all very good reasons to pursue this permit program, and Seattle should do what it can to help low-impact modes of transportation like scooters succeed.

But until our city has a complete network of bike lanes, the rules as proposed are setting scooter riders up for failure.