What should Seattle’s scooter rollout look like? + Public forum Wednesday 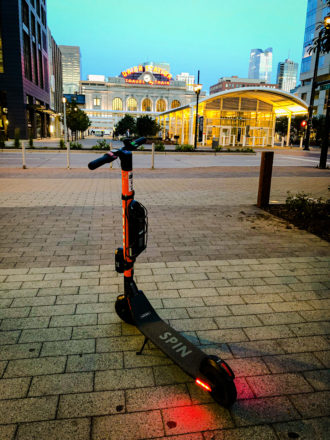 Seattle got out in front of most other U.S. cities when it encouraged private bike share companies to launch their services in summer 2017. The city’s experiment in dockless bike share has been wildly influential on how other cities have embraced so-called “micromobility” services like bike and scooter share. Seattle’s initial permit framework sort of became the template for crafting a framework elsewhere.

And bike share boomed in use in Seattle, even if the profitability of the endeavor is still rather uncertain. Bike share has helped propel biking to record levels across the city, and perhaps has even inspired people to go out and get their own bikes. As we reported previously, bike counts on the Fremont Bridge have continued climbing sharply even as the number of bike share trips plateaued likely due to a reduction in bike fleet size and increase in price.

But while other cities experimented with electric scooter share services, Mayor Jenny Durkan has resisted following suit. So the city is in an odd position as a leader on private bike share, but a hold-out on scooter share. That may all change soon, though, as the city is currently conducting public outreach ahead of a scooter share pilot program set to launch in spring next year.

The city is hosting a public forum on scooter share 6–8 p.m. today (Wednesday) in the Bertha Knight Landes Room in City Hall. You can also provide feedback via this extremely short online survey.

Below are some of the city’s goals with this program, from an SDOT Blog post:

As we have seen with bike share, accessibility is a concern as the city adds more free-floating devices to our sidewalks. Bike parking with expanded space for free-floating bikes and scooters is the obvious best solution, but Seattle has so much work left to do before such parking is readily available enough to prevent walkway-impeding parking jobs. So companies need to find ways to better encourage appropriate parking. I noticed that Lime has started requiring users to take a photo of their parked bike after ending a trip, which is a good idea especially if they follow-up with users to educate them about the rules (and maybe even add fees if necessary). 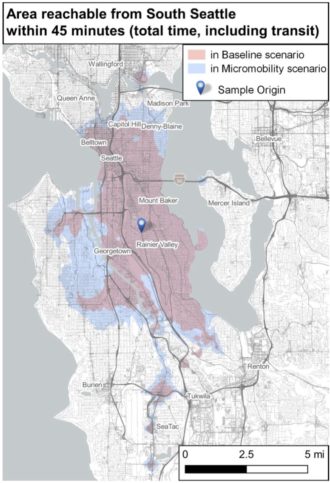 From a report by the Micromobility Coalition, an industry group founded by Uber and Jump (PDF).

But there is a lot of potential for scooters to build on recent bike successes in town and dramatically increase people’s ability to get around town without driving. The Micromobility Coalition, an organization founded by Uber and Jump to promote shared bikes and scooters, recently put out a report that tries to illustrate how scooters expand the number of jobs accessible to Seattle residents.

Other cities have found that many people who were never interested in riding a bike are willing to try scooters. I don’t personally get it (I feel much more comfortable on a bike), but it’s clearly true. On a recent trip to Denver, the number of people zipping around downtown on scooters was unbelievable and far beyond bike share use (Denver has docked bike share, dockless bike share and scooter share). I know this will be true for many parts of Seattle, too, though Seattle has some terrain challenges that Denver does not have. I’m very interested to see how scooter users handle steep downtown streets, for example.

We need all the tools we can get to help more people get around without cars, and that includes scooters. That’s also why I would be very sad if companies get rid of bike share when scooters launch, but that has been the trend in other markets. Seattle really stands out as the biggest market for private dockless bike share in the U.S., and I hope that continues in parallel with scooters and whatever comes next.

11 Responses to What should Seattle’s scooter rollout look like? + Public forum Wednesday