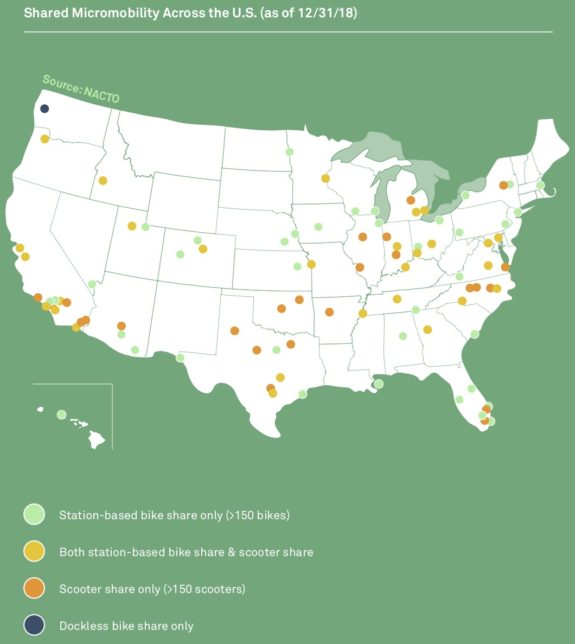 Just 21 months ago, Seattle turned American bike share on its head by permitting companies to launch free-floating bikes all over town, an effort that dramatically increased the number of bike trips all over town, turned heads in city halls across the country and helped demonstrate the popularity of so-called “micromobilty” companies, some of which are now valued in the billions of dollars.

Since Spin and Lime (née LimeBike) launched in summer 2017 the industry has pivoted and changed many times over:

But Seattle is a notable exception to this final trend, due mostly to Mayor Jenny Durkan’s continued resistance to allowing scooters. An early free-floating bike success story, Lime and JUMP are still working to compete here for the bike share market. Lyft is supposed to join the fray at some point, too, though there has been little news about their efforts.

And according to a recent report by the National Association of City Transportation Officials (“NACTO”), of which Seattle is a member, Seattle now stands out as an oddball in the country, and report authors essentially had to create a separate category just for Seattle. While other cities have sort of stratified into scooter cities and cities with dock-based bike share, Seattle is the only city noted as having only dockless bikes. At this point, Seattle is home to a huge percentage of all trips taken on dockless bikes in the country.

The report notes that 84 million trips have been taken on “shared micromobility” services in the nation, with the bulk split between the small handful of large docked systems and new scooter services: 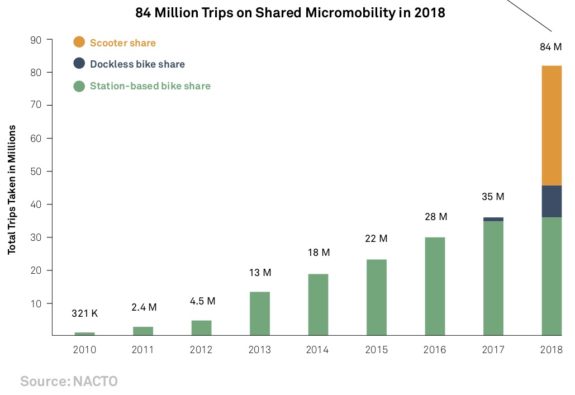 The report also confirms something Seattle’s Pronto Cycle Share learned the hard way: The worst-performing systems are dock-based bike share systems that do not have enough bikes and stations. But large dock-based systems, especially New York’s Citibike, continue to grow. And in cities that don’t have large, established docked bike share systems (so, most cities), scooters boomed in 2018. 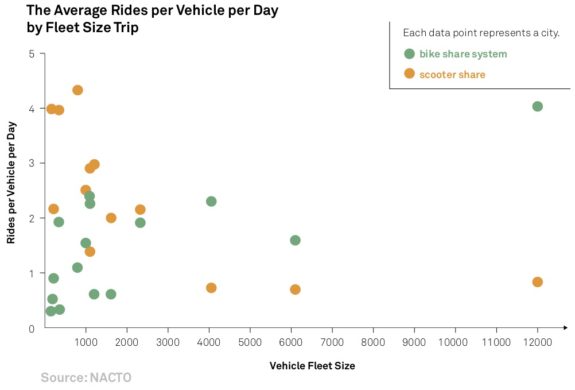 Pronto had 500 bikes, and struggled to get to 1 ride per bike per day, matching experiences in other cities.

Though this blog has been critical of the mayor’s stance on scooters in the past, I wonder if this will turn out to be a good thing (though not because scooters are too dangerous as she has suggested). We still have great bike share service today while other cities are losing bikes to scooters, a mobility tool that is popular but still unproven as a longterm success.

I was initially excited to hear about the popularity of scooters, and I liked the idea of them existing alongside bikes as part of an array of options people can choose from to get around without a car. But I must admit that the shift away from bikes at Lime, Spin and several other companies strikes me as possibly short-sighted. I get that these are for-profit companies, so focusing on more profitable scooters makes immediate business sense. But bikes have been around longer than cars, and they are a tried and true vehicle for getting around cities. The shared scooters might remain more popular than bikes, or they might be a fad. We just don’t know yet. Bikes don’t have the added appeal of being novel, but they definitely are not a fad.

Personally, I feel much more secure on a bike share bike than a scooter, but that is most likely just my personal preference as someone who is used to biking everywhere. Use in other cities suggests more people prefer the scooters.

While I would love to see Seattle add scooters as an option, I am happy that Seattle still has bike share. After Pronto’s demise, there is likely very little political will to invest public funding in a Citibike-scale docked bike system. So if the choice is bikes or scooters (rather than both), then I’d rather Seattle have bikes and remain the exception to the national trends. If nothing else, it seems potentially valuable to these companies to have Seattle’s bikes as a hedge on their bigger scooter bet. Continue experimenting here, trying to see how to grow bike share use. I’m certain the 2018 hard pivot to scooters is not the last pivot we’ll see from this industry.

Founder and Editor of Seattle Bike Blog.
View all posts by Tom Fucoloro →
This entry was posted in news and tagged bike share, nacto. Bookmark the permalink.