Bike share use steady with fewer bikes and higher prices, but bike parking remains a problem

The meteoric rise of bike share in Seattle in recent years has plateaued as the number of bikes in operation shrink and prices rise. However, despite these changes, people in Seattle took about as many bike share rides in the second quarter of 2019 as they did in 2018, showing that demand for the service remains strong.

So the good news is that bike share use is still strong, and a single e-bike seems capable of doing the lifting of multiple pedal bikes. But the bad news is that fewer bikes and higher prices have stemmed the growth in bike share use, which had been climbing fast since the services launched in summer 2017.

This report comes as the city is developing the details for an upcoming e-scooter share permit. Scooters have shown to be more popular than bikes in many other cities, and companies have been trying to convince Seattle to permit them for years. So this time next year, we may have scooter data to add to SDOT’s quarter 2 report.

The report also notes that bikes continue to block sidewalks and curb ramps too often. Nearly a third of bikes audited were found to be parked incorrectly, though there are plenty of places that technically are not allowed for bike parking but don’t really cause issues (an unpaved planting strip, for example). 17.4% of bikes were found to be “obstruction hazards,” which includes “bikes that were left blocking the sidewalk, curb ramps, … building access, on corners within corner-curb radius area, all bikes left in bus zones, and all bikes left in continuous building frontage zones,” according to the report. About 1.6% of bikes were found to be the worst: ADA-prohibited obstructions, which means the bike did not leave at least four feet of space for people to get through.

As a result of the audit, the city further reduced the fleet sizes for each company, though both Lime and Jump were already operating below their new limits. But “these enforcement actions have a cumulative impact, and unless improvement is seen, further reductions may require vendors to temporarily or permanently remove bicycles,” the report notes.

The city is working to expand the supply of bike parking both for personal bikes and free-floating bikes, adding more than 700 spaces so far in 2019 with the goal of adding another 800 by the end of the year. About 70% of the new spaces have been in new on-street bike parking corrals, which are often located adjacent to crosswalks where car parking is already illegal within 20 feet (probably the most-broken traffic law in the city). These corrals improve the supply of bike parking, help keep sidewalks clear and improve visibility at crosswalks. 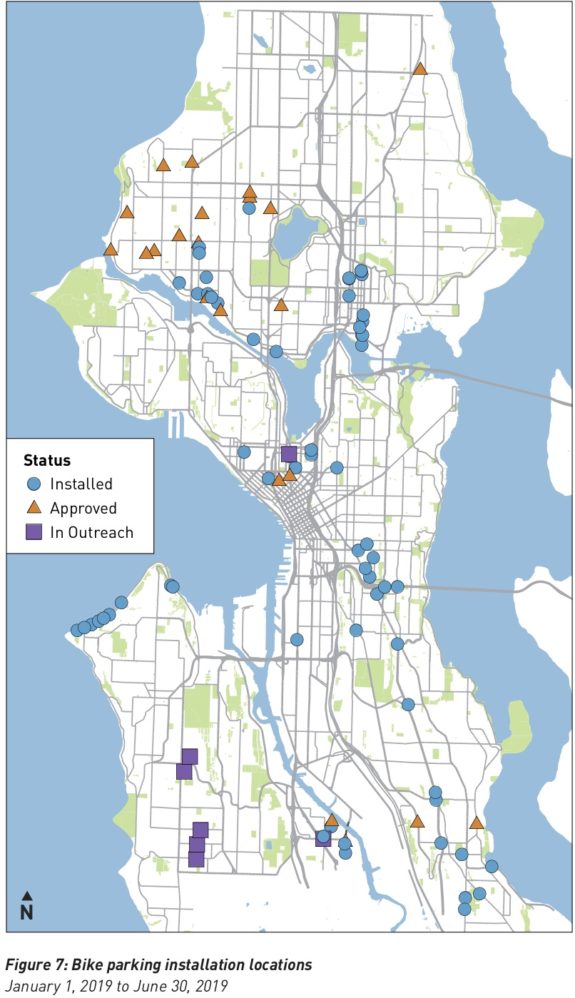 Founder and Editor of Seattle Bike Blog.
View all posts by Tom Fucoloro →
This entry was posted in news and tagged bike share, jump, limebike, sdot. Bookmark the permalink.

15 Responses to Bike share use steady with fewer bikes and higher prices, but bike parking remains a problem