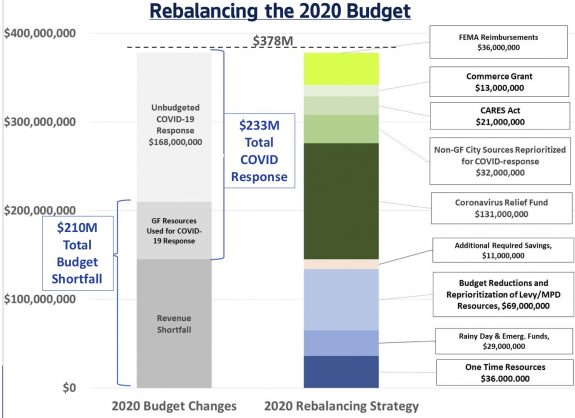 From a presentation on Mayor Durkan’s proposed budget rebalancing (PDF).

Mayor Jenny Durkan and SDOT have paused $58.3 million worth of projects as the department attempts to deal with the impacts of the COVID-19 outbreak on the municipal budget. The cuts represent about 8% of the department’s adopted budget with safety and transit projects hit much harder than car-centric projects.

The full extent of the pauses is not yet known, though the department did list some specifics in a recent blog post. At least two safety corridors, two Safe Routes to School, six Bicycle Master Plan improvements (half of which are in South Seattle), the community-led Your Voice Your Choice program (mostly safety projects), and a bunch of multimodal and sidewalk projects have been delayed. The City Center Connector Streetcar is paused and, let’s be honest, is probably doomed. And many transit-focused projects in the Seattle Transportation Benefit District have officially been held pending the final I-976 decision.

In comparison, only one arterial paving project has been paused, and it is part of a transit project, too. In several cases, the car-centric parts of paving projects will continue, but the safety and sidewalk elements have been cut. And because Mayor Durkan built almost no bike projects in the first half of her term, these latest delays come right as progress on the city’s bike goals was finally getting under way.

As of today, the following Levy projects are paused until January 2021, and/or pending a final decision in conjunction with the 2021-2022 budget process, sorted by Levy program:

In addition, the following non-Levy capital projects are paused:

The cuts to safety are a bitter chaser after Mayor Durkan delayed key bike mobility and safety projects for the first two years of her term. By the end of 2018, SDOT had completed only 4% of its bike lane goal for the year. The effect of those delays was bad enough then, but now safety projects that should have been completed are facing more delays. The mayor already made big cuts to SDOT’s bike improvements plan in 2019, and now the relatively few bike projects that survived are over-represented in this round of pauses.

To put it bluntly, the Bicycle Master Plan has gotten screwed in recent years, and the forecast looks bad, too.

This comes at a time when biking is booming. Even before the COVID-19 outbreak led to a run on bikes at bike shops across the nation, biking was growing faster than ever. Business cannot resume without a way for people to get around. And with many people still avoiding transit due because it is difficult to social distance, biking and walking are vital. If anything, the city needs to prioritize high-impact bike connections to create safe and comfortable routes that reach more homes.

Meanwhile, the city front-loaded some of the Move Seattle Levy’s most expensive, car-focused projects (like the Lander Street Overpass) and is taking very small bites from the car-centric budget in this round of pauses. Though because the department front-loaded so many car-centric project in the first couple years of the 2016 levy, there just aren’t that many to cut anymore. The 2016-24 arterial paving plan (PDF) shows that the bulk of that work is either complete or already in construction. And repairing or replacing the broken West Seattle Bridge, a limited-access freeway, has unexpectedly taken center stage in transportation discussions.

Basically, whether intentional or not (likely a bit of both) the Mayor and SDOT have successfully put cars first in spending the Move Seattle Levy, and now many of the walking, biking and transit plans the city promoted heavily to sell this levy to voters are exposed as the bottom falls out of the city budget. Delays like this push other projects over the edge at the end of the levy. Because even if the levy money itself can’t easily go to other city uses, the levy is only part of the city’s transportation revenue. And many of the promises made when selling the levy assumed a certain amount of support from other funding sources — like Federal grants, parking revenue, street use fees, the city general fund and vehicle license fees — that have dried up due to the outbreak or are at risk from I-976.

So while the city focuses on the immediate, near-term and mid-term budget challenges, there is another huge problem looming for transportation: How is the city going to convince voters to back another transportation levy if they fail so terribly to deliver the promises made in this one?

The pauses will be in place until a future city budget can account for them. So they aren’t dead, but they are very much at risk.

The covid-19 outbreak continues to spread and kill people across the world, and the end is not in sight. Massive public efforts and personal sacrifice by so many people in Seattle and King County have been successful at keeping case numbers and deaths to a relatively stable level, and the county recently moved to “Phase 2” of reopening. But the outbreak can rebound at any moment if people get too lax about wearing masks, maintaining social distance, washing hands and all the other anti-outbreak strategies we all know so well. And while many parts of the country and some parts of Washington State face scary outbreaks now, public health officials are bracing for a big surge in the fall to accompany the regular flu season.

So far, the City of Seattle has been mostly pushing through with its previous budget in place, but the reckoning is beginning. And it’s going to be a brutal budget fight.

Budget decisions will happen in a few phases now through the end of the year. First, Mayor Durkan and department heads will pause work as outlined above. Then the Mayor and City Council will hash out a mid-year “rebalancing budget,” which they are currently developing and debating. Finally, the Mayor and Council will create a 2021-22 budget in November that sets a longer-term path.

Of course, the entire debate doesn’t need to be about cuts. The city can also seek additional revenue. Budget Committee Chair Teresa Mosqueda has gathered strong Council support for her JumpStart Seattle big business and high-earner tax proposal. But that tax cannot come soon enough to avert some major changes to the scope of city work, and the current proposal is not focused on transportation funding.

The Mayor’s rebalancing budget also only cuts $20 million from the Seattle Police budget, which is about a third as much as the savings from delaying all these transportation projects and nowhere near the 50% reduction protesters are demanding. This was Councilmember Tammy Morales’s response to the mayor’s $20 million SPD cut proposal:

Seattle Bike Blog will cover the budget process as it evolves, so stay tuned. But people should also be thinking about a better way to fund transportation work. Two levies in a row have been massively derailed by larger economic events. The 2006 Bridging the Gap Levy hit the Recession just two years into its work, dramatically reducing the scope of work completed. Now the same is happening to the Move Seattle Levy. That’s a lot of broken promises. Sure, property tax levies are more equitable and stable than sales tax, but they may not be the best way to fund work as basic as transportation improvements and maintenance.