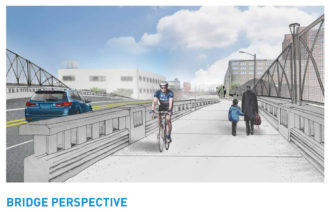 Of all the major transportation investments Seattle has planned using Federal grant assistance, the only one that is not at risk by the Trump administration is the one we need the least: The Lander Street Overpass.

That project is moving ahead at a very quick pace with final design planned for completion in July. SDOT is hosting an open house 4 – 6:30 p.m. today (Thursday) at Metropolist to discuss the Lander Overpass plans. You can also learn more and comment via the project’s online open house (it takes quite a few clicks to get to the comment form, but stick with it!). 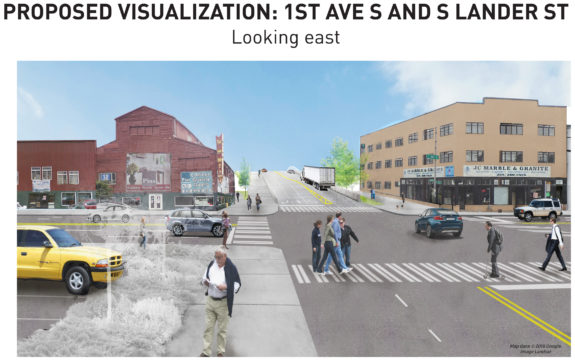 This is horrible design for walking and biking safety, reminiscent of the kinds of people-hostile, car-focused bridges designed in the 1950s and 60s like this sorry excuse for a Denny Way bridge across I-5: 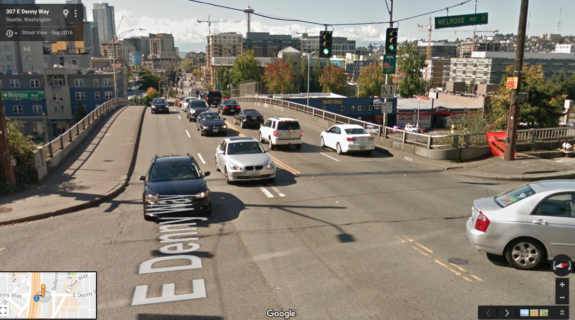 Forcing people to cross busy streets multiple times in order to reach a sidewalk is an unnecessary impediment to walking and a recipe for disaster. Every extra crossing means added times to walking trips, more frustration (and, thus, more cases of people crossing against the signal) and more opportunities for collisions.

For people biking, the plan would likely work well for people headed westbound. But it would be awful for people heading eastbound, who will be expected to somehow cross to the opposite side of the street to get to the trail, then cross back again on the other side. This is not realistic. People will either follow the design and add minutes to their trips or just bike in the much faster general traffic lanes without any separation from the truck-heavy traffic.

We simply cannot build bridges like this anymore. In 2017, it is street safety malpractice.

The answer is clear: Include walking and biking spaces on both sides of the bridge.

Planners can do this without adding cost to the project just by reducing the number of lanes. Right now plans call for two lanes westbound and one lane eastbound. But not only is overall traffic declining on Lander, westbound traffic is barely higher than eastbound:

Table from SDOT, via the Urbanist.

So the city could just build one lane each way and dedicate the extra space to preventing serious injury and death on this new piece of major public infrastructure. Such a bridge would greatly increase capacity for freight and general traffic, reduce delays, improve access to Sodo Station and improve safety for everyone.

Amid Trump budget uncertainty, the city should hold onto our Lander cash

The train tracks in Sodo do pose challenges to all people trying to get around, whether walking, biking, driving or hauling freight. Lander passes by the Sodo light rail station, and a bridge over the tracks would make it a very appealing option for people biking to and from West Seattle and the Duwamish Valley neighborhoods. And hey, nobody likes waiting for trains.

However, with desperately-needed transit funds under attack — including Federal support for the Madison BRT project in Seattle and other big transit projects across the region — perhaps Seattle needs to hold its major transportation capital funds to be prepared for the unknown. This could mean slowing the Lander project, which is currently moving at light speed (for a high-budget project, anyway) after many years collecting dust on the shelf.

Ryan Packer at the Urbanist recently made the case for slowing the Lander project, pointing out that traffic on Lander is declining while the need for all these transit projects that have been put at risk only grows.

To put this funding in perspective, the city is planning to spend twice as much on this one bridge in Sodo than on the $16 million earmarked for the new Madison Bus Rapid Transit (RapidRide G) project. RapidRide G would provide fast, high-capacity transit service to support a central-neighborhood (Capitol Hill, First Hill, Central District, Madison Valley) population that is growing fast and showing no signs of slowing down. Meanwhile, traffic on Lander has been declining, down 24 percent since 2007 (thanks in part to transit investments like light rail and RapidRide).

If the Trump Administration succeeds in cutting the $60 million in expected grants for the Madison project, then the city’s $33 million for the Lander project may be needed elsewhere.

I know this sucks for freight interests that have been pushing for the Lander bridge for a long, long time. Assuming the bridge design is improved so it is actually safe like it should be, then delaying this bridge also sucks for people biking and walking.

But these are extraordinary and uncertain times for the city’s transportation capital. Just this week, Mayor Ed Murray and City Attorney Pete Holmes sued the Trump Administration over its threatened budget actions against so-called sanctuary cities like Seattle. If Trump wins that fight, the transportation budget will be the hardest hit. It’s definitely a price worth paying, but Lander’s cash would be good to have on hand if that happens.