‘Our crumbling streets can be rebuilt later, our humanity cannot’ 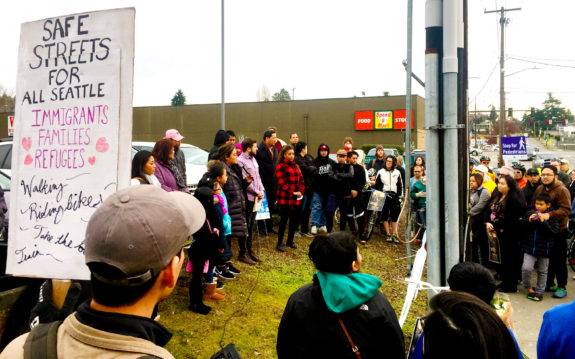 As advocates for safe streets, Seattle Neighborhood Greenways has spent a lot of its efforts lobbying, campaigning and building support for infrastructure investments. So with lots of local transportation funding at risk if the Trump administration succeeds in its threat to pull federal funding from so-called “sanctuary cities,” where does Seattle Neighborhood Greenways stand?

“Our crumbling streets can be rebuilt later—our humanity cannot,” SNG Executive Director Cathy Tuttle wrote in a joint statement with Rich Stolz of the Washington immigration rights organization One America (posted in full below).

Seattle should fight hard against punitive action by the federal government. But if that fails, we must defend our values and our neighbors before defending our budgets.

The joint statement was released just days before the Muslim ban executive order was signed, kicking off another weekend of massive protests in the region.

It was also released days before neighbors, co-workers and loved ones gathered on S Graham Street to remember Ronacin Tjhung, a recent immigrant from the Philippines and father of five who was killed in a collision with someone driving an SUV while he was biking to his second job.

“Working people of all nationalities need safe bike routes,” Councilmember Kshama Sawant said at the memorial, “so that people don’t have to make dangerous decisions to get to their jobs.”

Hours later, I was in another crowd listening to Sawant lead, this time in SeaTac Airport. We were demanding the release of people detained at SeaTac and ports of entry across the nation because of where they were born.

We must keep working for safe streets for everybody. But that starts by fighting to make sure everyone can get to our streets in the first place. All of you out there who are organized around the issue of safe streets should also utilize those networks to organize for other causes as the need arises.

Organize bike rides from your neighborhood to protests, and invite people who may be nervous about biking on city streets to join you. You will help them get to the protest and help them feel empowered to bike around their city in the process. Or your ride can be a way to hold each other accountable for showing up just as hard on day 100 as we did on days 1 and 10.

Check out the Stranger’s constantly-growing Resistance Calendar, pick an event, and spread the word that you will be meeting up at the local park with plenty of time to bike at a leisurely pace to the start. And, of course, add your ride to our events calendar. If you have any questions about hosting or promoting a ride I am happy to be a resource. Email [email protected].

The purpose of this letter is to express our support for the Mayor’s declaration of Seattle as a Sanctuary City, committed to shielding undocumented immigrants from the threat of deportation and family separation. President Trump has expressed his intent through executive order to punish sanctuary cities by threatening to revoke their federal funding. Because of the City of Seattle’s principled stand, under some scenarios, the President’s position may put into question billions of federal dollars annually for infrastructure and other essential municipal services for Seattle and the region, which could in turn have a direct impact on projects and policies we have advocated for, together.

Our crumbling streets can be rebuilt later–our humanity cannot. In Seattle, we trust in our ability to draw on significant internal resources to continue to maintain and improve our street infrastructure while we continue to protect and welcome people new to Seattle who come here from across the world.

Seattle Neighborhood Greenways coalition members are located throughout Seattle, from Lake City to Rainier Beach. As part of our organizing model, we ally and support those groups that bring neighbors together in positive, constructive gatherings and coalesce to defend basic human rights, including the work of One America. Immigrants are members of our coalitions and communities, and all of us deserve access to basic, safe infrastructure.

Immigrant and refugee communities have taken action to support community transportation improvements including the Move Seattle Levy. Recently One America and Seattle Neighborhood Greenways partnered on distributing “Hate Has No Home Here” multi-lingual yard signs. And sadly, immigrant communities are often our partners on Vision Zero Memorial Walks following traffic fatalities. Together, we strive to put people first in a manner that recognizes how creating a more equitable community can mean taking important risks.

We resolve to support people of color, children, the elderly, the other-abled, and the people who cannot afford to travel by means other than by transit, on foot or by bike. We will continue to do what we can to ensure their safety comes first, even—especially—as we face the possibility of an unsupportive federal administration. We will support Seattle in its efforts to protect and increase federal investments in critical transportation infrastructure needs. And we will oppose actions by federal authorities, like using the threat of cuts to federal funding to compel the City to undermine values that we cherish.

One of our active community members has taken to delivering flower bulbs by cargo bike, “because we’ll need to see signs of hope in the spring.” We will look to the spring of 2017 as a time to celebrate our diverse community.

Wishing you strength and happiness in 2017.

9 Responses to ‘Our crumbling streets can be rebuilt later, our humanity cannot’