Both the State House and Senate have passed a bill clarifying the legal status of electric-assisted bicycles on streets, sidewalks and trails. The bill (SB 6434) now heads to Governor Jay Inslee’s desk for a signature.

If signed into law, the new rules will help the burgeoning e-bike industry grow by aligning state regulations with existing Federal rules. Until now, there were too many gray areas about when an e-assist bike should be treated like a bicycle and when it should be treated like a motor vehicle. The outdated rules failed to account for modern e-assist bike technology that follows a more nuanced three-class system: 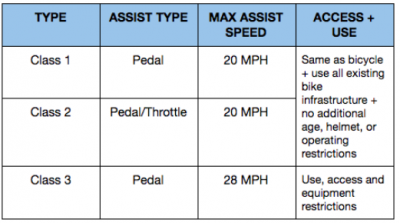 E-assist bikes have huge potential to expand access to bicycling to more people, so it is good for communities across the State of Washington if the e-assist bicycle industry succeeds here. But uncertainty and legal gray areas are no good for business.

Washington Bikes worked hard to advocate for this bill, and they deserve some serious props for getting it through on the first try. It passed 44-2 in the Senate and 86-12 in the House.

Big thanks to prime sponsors Sen. Rolfes and @StateRepKilduff for their leadership and support in bringing e-bike legislation to final passage! #waleg #wabikes #ebikes pic.twitter.com/oDkfKkFDzP

One major practical change here for e-bike users is that Class 1 and 2 bikes will be allowed on sidewalks and shared-use trails, unless otherwise prohibited by local laws.

Bikes powered beyond 20 mph (“Class 3”) are now clearly prohibited from sidewalks and trails “unless there is no alternative … to travel over a sidewalk as part of a bicycle or pedestrian path.”

The rules also remove the age restriction for Class 1 and 2 bicycles. I’m pretty sure nobody knew this, but the previous law required e-bike riders to be 16 or older. You still need to be 16 to ride a Class 3 bike.

Local jurisdictions can still make their own rules, and the state law does not pre-empt existing rules. So unfortunately, rules like King County’s e-assist ban on all trails still need to be changed individually. But now that state law has set a precedent, perhaps it will be easier to get local governments to align their rules with state laws.

King County Parks rules (see 7.12.295) use an overly broad definition of “motorized vehicle” that clumsily groups all e-assist bikes with “automobiles, golf carts, mopeds, motor scooters, and motorcycles.” The rules should be updated to allow Class 1 and 2 e-assist bikes the way the new state law does, at least for trails that are paved or gravel.

Another interesting provision in the new state law is that local jurisdictions cannot make new restrictions to a section of a trail that passes through unless the rules are changed for the whole length of the trail (rules that existed before 2018 are exempted). This makes a lot of sense. Imagine, for example, if e-bikes were allowed on the Burke-Gilman Trail in Seattle and Kenmore, but not in Lake Forest Park. That would be absurd.

I don’t love that the new bill limits bike motor power at 750 Watts. This puts state law in alignment with Federal regulations, so this beef is really with the Federal rules. But motor Wattage just seems arbitrary to me. I’m much more concerned about the speed of these bikes. If the goal is to limit bike acceleration (which I understand), there must be a better way to achieve that goal. But the power needs of a cargo or family bike are much higher than the needs of a personal bike. What if a company wants to innovate bigger cargo bikes for replacing vans and trucks making local deliveries but are stymied because the 750-Watt rule won’t get them up steep hills? Or what if a cargo bike company innovates a minivan-replacing bike for big families? Or e-bike-powered buses? Don’t laugh, it could happen. This e-assist bicycle thing is just getting started, and we have no idea what innovations are ahead. I bet the Watt limits are the first part of this law to become outdated.

But for now, it’s worth congratulating WA Bikes on getting this bill through both chambers. It’s a big step for legitimizing the e-assist bikes in our communities.

Founder and Editor of Seattle Bike Blog.
View all posts by Tom Fucoloro →
This entry was posted in news and tagged electric assist, SB 6434, washington bikes. Bookmark the permalink.