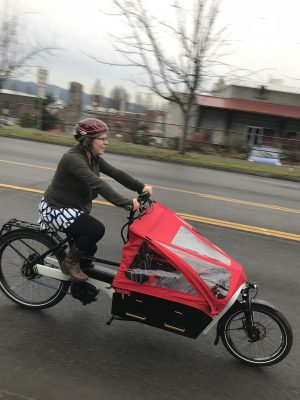 Photo by WA Bikes featuring my amazing spouse Kelli, who works for the organization, and our new e-bike we plan to use to stay car-free once our child is born.

What exactly is an electric-assist bicycle? And where can you ride one?

Providing state-level clarity on these questions is one part of Washington Bikes’ 2018 state legislative agenda, along with efforts to protects multimodal transportation funding, protect and connect trails, and better measure the economic benefit and health cost savings from bicycling.

Sure, an e-assist bike has a motor, but it rides like a bicycle. Sometimes e-bikes are treated like any other bicycle, but sometimes laws treat them as motor vehicles. Confusingly, one set of regulations ties e-assist bicycles, mopeds, motorized foot scooters and motorized assistive mobility scooters together in some — but not all — cases. E-bikes are allowed in bike lanes, but not sidewalks. They are also allowed on trails, except where local jurisdictions say they are not allowed. And local jurisdictions rarely make their exceptions clear to users.

It’s all a bit confusing, which is a problem both for users and for a growing industry that holds big promise for increasing access to bicycling to more Washington residents of all ages and abilities. Studies have demonstrated that riding an e-assist bike still provides a significant amount of exercise, which so many residents of our state do not get. So state leaders should be looking for ways to encourage more e-assist biking.

For example, Seattle’s extraordinarily popular Westlake bikeway is a bike lane, but do the connections on either end of the bikeway count as trails or sidewalks? What about the biking and walking paths leading to and crossing the Fremont and Montlake Bridges? I honestly can’t tell you the answer off the top of my head, and I’m a journalist who has been covering bicycle transportation for seven years. The line between “trail” and “sidewalk” is often very blurry. If you’re riding a bicycle, the difference doesn’t matter because both are legal. But if you’re on an e-bike, it technically does matter.

In reality, people with e-bikes just ride them like they are on a regular bicycle, and I’ve never seen any empirical evidence that this is causing any problems. I also haven’t heard of many (any?) cases where someone was been ticketed for riding an e-assist bike on a sidewalk. So why not just simplify state law to reflect how things are already working?

Washington Bikes is working on legislation this session in Olympia to help provide some clarity to at least some of the questions surrounding e-assist bike use. The simplest option, which the organization touted in a recent blog post, would be to align state definitions with national standards.

Under a 2002 Federal law, any e-bicycle with a 750-Watt (1 hp) or lower motor that stops providing power beyond 20 mph is legally considered the same as a normal bicycle. Notably, the Federal limit of 750 Watts is lower than Washington’s 1,000-Watt limit, so this change would decrease the power maximum. But since a simplification of the law should allow e-assist bikes on sidewalks, lowering the power level probably makes sense.

Unlike California law, existing WA and Federal laws do not differentiate between bikes with throttle controls that do not require pedaling and “pedelec” bikes with motors that only provide power while the rider is pedaling. And considering how quickly e-assist technology evolves, perhaps it’s wise not to be too prescriptive about bike specifications and definitions.

At least aligning state definitions with Federal law would clarify things a bit and provide a basic and commonly-followed guideline for deciding when a bicycle with an electric motor should just be treated like any other bicycle.

Though this change has been on WA Bikes’ to-do list for a long time now, the news earlier this week that LimeBike and Spin are both planning to launch pedelec-style e-bikes puts an extra emphasis on the need to simplify state law for users. Both companies say motors on their bikes won’t assist beyond 15 mph, which is 25 percent lower than WA and Federal limits.

Has riding an e-assist bike impacted your life? WA Bikes is collecting stories:

Has an e-assist bicycle helped you get back into biking or bike more often? Do you use an e-bike to tow your children around? Tell us your story, we want to hear them: https://t.co/Fn86B58hML #ebikes #WAbikes pic.twitter.com/nmyQMawLtU

More on their 2018 legislative agenda, from WA Bikes:

Updating Washington’s electric-assist bicycle laws to national standards. The usage of electric-assist bicycles (e-bikes) is booming. They serve as a way to “flatten hills” across our hilly and mountainous state, and allow many who feel intimidated by biking a new opportunity to experience the freedom of two (or three) wheels. Rapid innovation in the e-bike industry has led to greater adoption and more e-bikes on streets and trails. Existing Washington state laws pertaining to e-bikes are outdated and fail to address all types of e-bikes currently on the market, as well as where they can go. The proposed legislation updates the classification system to give Washington state new tools to effectively enforce and manage e-bikes.

The e-bike industry endorses this framework and these national standards, which if enacted, will allow consistency in the Washington state market to laws now-adopted in states like Arkansas, California, Colorado, Tennessee, and others. Already state legislators are hearing from constituent e-bike riders who want clarity regarding where they are able to ride. Finally, the health benefits of e-bicycling are comparable to a brisk walk or low-intensity jog. E-biking for transportation and recreation results in stronger heart rates, lower blood sugar and body fat.1

These investments include: the bicycle and pedestrian grant program, regional mobility grants and Safe Routes to School programs and projects.

Measuring the economic impact & health cost savings of biking and hiking in Washington.Bicycle travel and tourism is big business and benefits Washington businesses with $3.1 billion in annual spending. Physical activity is another big benefit of bicycling and its particularly important as the nation addresses its obesity crisis and as our state’s children struggle with getting the recommended amount of daily physical activity.

In a partnership with the Washington Trails Association, Washington Bikes will be seeking funding for a study to be conducted by the Washington State Department of Commerce. The study will quantify the bicycle and hiking tourism industry and the health benefits from these forms of active recreation and transportation. This deeper dive, building on the Governor’s 2015 Taskforce on Outdoor Recreation and Parks (which was co-chaired by then-Washington Bikes Executive Director, Barb Chamberlain), will provide new strategies for health cost savings and grow our state’s economy, particularly in rural areas.

Protecting and connecting trails statewide. Trails form a backbone of many of the biking and walking networks statewide. Key project priorities include the development of the cross-state John Wayne Pioneer Trail, as well as the regional backbone for the East King County trail network, the Eastside Rail Corridor.

Founder and Editor of Seattle Bike Blog.
View all posts by Tom Fucoloro →
This entry was posted in news and tagged electric assist, washington bikes. Bookmark the permalink.