UPDATE: Here’s the video of the city’s presentation: 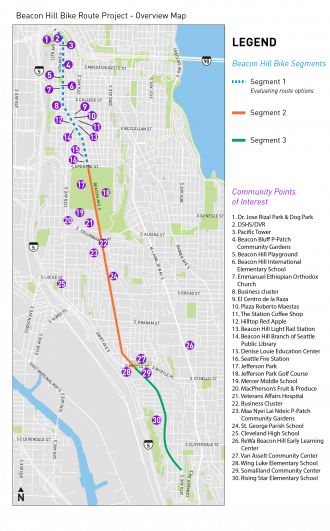 Beacon Hill has one street that cuts across the grid to be the most direct route and is less steep than other streets nearby: Beacon Ave S.

Even with hardly any bike infrastructure at all, Beacon Ave is a fairly well-used bike route because it’s just the most direct route. But it can also be a nerve-racking experience to mix with car traffic on a street that changes its layout constantly. Sometimes there’s room for people to pass, then there isn’t, then there’s parking, then there’s a bus stop, then there’s a turn lane. And some sections go long distances without interruptions, meaning people driving can pick up a lot of speed.

But a truly safe and protected bike lane on Beacon Ave would change everything, especially for people south of Jefferson Park. It would also greatly improve the usefulness of the recently-completed connection to Columbia City via S Columbian Way.

Thanks to major pressure from neighbors and safe streets advocates during the 2019 city budget process, the City Council restored funding that Mayor Jenny Durkan cut from the Bicycle Master Plan budget and directed SDOT to invest in a major south Seattle bike lane like Beacon Ave or MLK Way S. So this is the result of that advocacy.

SDOT is currently in the early planning phase, and they are trying to identify the basic route the project will take before getting into the finer details. Though design work is underway, the project is not scheduled for construction until 2023.

SDOT is hosting an online presentation 5 to 6 p.m. today (Wednesday) about the project:

South of S Forest Street, there really aren’t other options. The project team is pretty much set on Beacon Ave as the route, which is great. This includes the section between Jefferson Park and the golf course, which includes a mostly useless center turn lane and a huge, long parking lot. There are several options here for creating protected bike lanes. 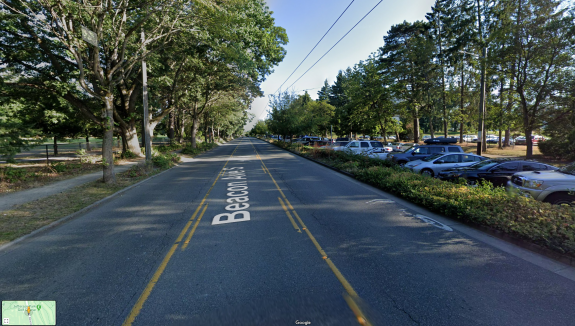 South of Columbian Way, Beacon Ave already has a winding and only partially usable or accessible sidewalk that travels through the center median. It looks nice on a satelite map, but the reality on the ground is much different. Sometimes the trail disappears and turns into a parking lot, and there is rarely a quality crossing at cross-streets. When using it, you are constantly worried that someone will turn into you because they are not expecting someone to be in the median. Many people who bike this stretch choose to just bike in the street rather than deal with these issues. 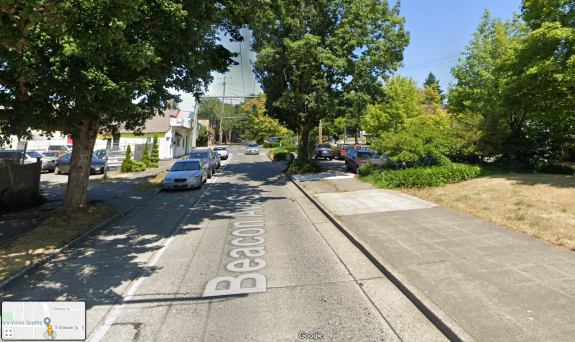 In many places, the median path dead ends into a parking lot. From Google Street View.

The success of this median trail project will depend very heavily on how they handle these parking areas and the street crossings. The path already largely exists, which is a big head start. But there’s a ton of work left to do, and this route just won’t work unless these remaining pieces are done right. The path needs to be complete and protected with clear and safe street crossings.

The route goes all the way to where Beacon Ave S dead ends into 39th Ave S, which loops around and turns into the beautiful Carkeek Dr S, which then turns into S Henderson St through Rainier Beach. That’s the scenic route. You could also hop off Beacon Ave at S Thistle St and get to Rainier Beach via the Renton Ave S bike lanes.

The North segment has more options on the table. The flattest and most direct route is 15th Ave S, which also has no transit. 14th Ave S serves more destinations, but is also hillier and less direct. 12th Ave S is the hilliest option, including a very steep climb near the Jose Rizal Bridge, and serves the fewest destinations. Honestly, 12th Ave S might be a fine neighborhood greenway option as a local neighborhood improvement, but it feels like a totally different project. There’s no way people are going that way when they have much more gradual and direct options available.

I’d be open to hearing arguments for 14th, but it’s going to be hard to beat 15th, which is less steep and more direct. 15th already has a bike lane in one direction and is well used. 14th has some short sections of bike lane as well and directly serves Beacon Hill Elementary School. They look interchangeable on a map, but the reality on the ground is much different. The grade difference between 14th and 15th can be pretty steep in places, so people use whichever one makes the most sense for where they are going.

14th almost feels more like a Safe Routes to School project, still worthy of safety investments on its own. But I am pretty sure most people traveling through the area use 15th. And I suspect that even if the city invests to improve 14th, many people will stick to 15th anyway. Bike lanes don’t flatten hills.

This entry was posted in news and tagged beacon ave, beacon hill, sdot. Bookmark the permalink.