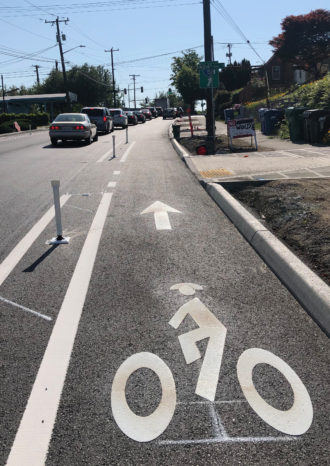 Here’s some great news for southend bike riders: SDOT has decided to complete the westbound S Columbian Way bike lane at Beacon Ave after all.

As we reported in June, neighbors of the major Columbian Way repaving project were surprised to see that the brand new protected bike lane ended about a half block early, leaving an uncomfortable uphill gap used by people driving turning right on to Beacon Ave. The bike lane, the biggest bike infrastructure improvement in southeast Seattle this year, was supposed to be a complete connection all the way to 15th Ave S, serving Mercer Middle School and Jefferson Park. There was no mention on the project website that the bike lane had been cut back half a block, and advocates were caught unaware. Even some SDOT staffers didn’t seem aware of the change.

Needless to say, people were pretty upset, yours truly included. As I wrote:

“A bike route is only as comfortable as its least comfortable section. A missing gap like this is likely the difference between whether a family will use the lane with their kids or not, for example. This is the route from Columbia City to Jefferson Park and Mercer Middle School, for example. So eleven-year-olds are now supposed to just merge with car traffic every day while biking up a major hill to school?”

Well, SDOT listened, and they are fixing it. Right now.

More changes at Columbian Way and Beacon Ave! The bike signals aren't up yet nor is the new "right turn" light, but it's happening! The changes extend the right turn lanes for cars and builds the bike lane to and through the intersection. Thanks @seattledot! pic.twitter.com/pYzum8wNh4

SDOT Spokesperson Ethan Bergerson said the change is “in response to concerns from people who bike in this area and specifically thanks to your article highlighting the problem this summer.” So good work everyone who spoke up about it. Special shout out to Matthew Snyder, a reader and project neighbor who was very persistent in tracking down the construction plans and asking questions.

The changes also come with some significant changes to the intersection, especially for people trying to turn left. From the SDOT Blog:

“With the new left turn restrictions for drivers looking to go northbound and southbound, drivers now will need to turn right, then make 2 left turns to get to their respective northbound or southbound destinations. These are called Michigan Left Turns. Suggested turn around streets include S Alaska St and S Ferdinand St. We understand this will be a change for some drivers; however, it will improve the traffic flow in the intersection and protect cars and people that ride bikes from collisions.”