Late last year SDOT released early designs for the safe bike route being planned to run nearly the entire length of Beacon Hill, currently scheduled to start construction in 2023. While the route on the northern end of the hill is still being decided by SDOT, we got a pretty clear picture what the department was planning for Beacon Ave south of Jefferson Park golf course. The sidewalk path that winds around the wide median in the center of the street, would be widened by four feet to better accommodate people traveling in both directions. 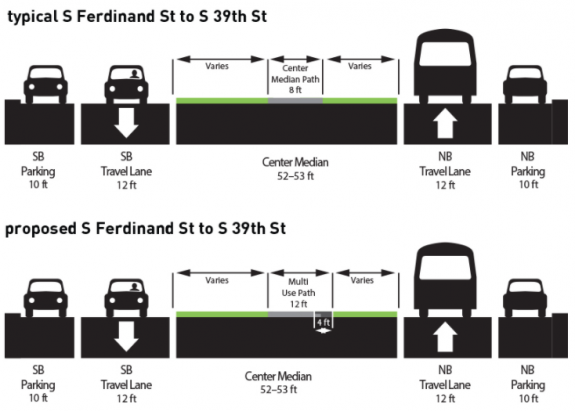 Latest designs for the center median on Beacon Ave from late 2020. (Click to enlarge)

On a segment of roadway that’s nearly 100 feet, only four additional feet would be provided to allow Beacon Ave to become a primary north-south bike route for people traveling through a large swath of the city. 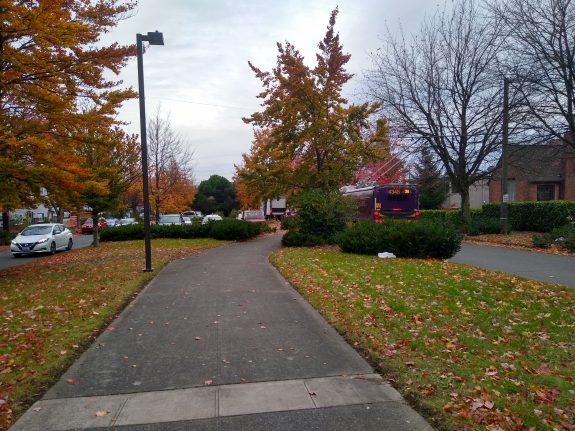 When this design was presented to the Bicycle Advisory Board last year, several members expressed concern that routing relatively fast-moving bicycle traffic down this center median would not work well, with no separation between people walking and people biking. In January, the board wrote a letter to SDOT. From the letter:

Adding bikes to the Center Median Path crowds a trail that already has a wide variety of users, which has the potential to take this asset away from community members or make it more dangerous for community members. In addition, routing bikes onto this Center Median Path does not facilitate biking as a mode of transportation, for reasons we outline below. The current design prioritizes vehicular traffic and parking. SBAB would like to encourage SDOT to be forward thinking and creative.

The board has asked SDOT to “Analyze the option of adding protected bike lanes to the street and maintaining the Center Median Path for walkers/runners/families”, or, if that’s not feasible, to “explore all creative possibilities for enabling ALL users to share the Center Median Path in a safe, comfortable, intuitive way”.

We’re concerned that widening the Beacon Avenue median walking path to accommodate more bicycles will lead to increased conflict between relatively fast bicycles and those walking, jogging, and rolling on the trail, especially on the sections that will have the most use and/or that have a steep grade. When we picture bicycles on this winding, park-like trail, we think of children learning to bike or adults out for a leisurely ride.

The letter asks the department to study an in-street bike lane option.

The design for this section should explore placing a bike lane on either side of the median in the existing street and have the cars move along closer the cars parked there, as has been done on Ravenna Boulevard. The roadway is already wide enough to allow this and also has the advantage of slowing vehicular traffic. This is a design that has already proven to be feasible in North Seattle, avoids conflicts with driveways, and would be less expensive than widening the median. We also would like SDOT to conduct a parking study of the project area. There are long stretches of Beacon Avenue in which the on-street parking is only lightly used. We question whether private property storage is really the best use of three miles of one of our primary arterials in Southeast Seattle.

Both groups are asking SDOT to conduct a parking study to determine how utilized the current parking lanes that run along the outer curb on Beacon Ave. There are also parking spots in the center median in numerous spots that SDOT has previously said would not be reduced. 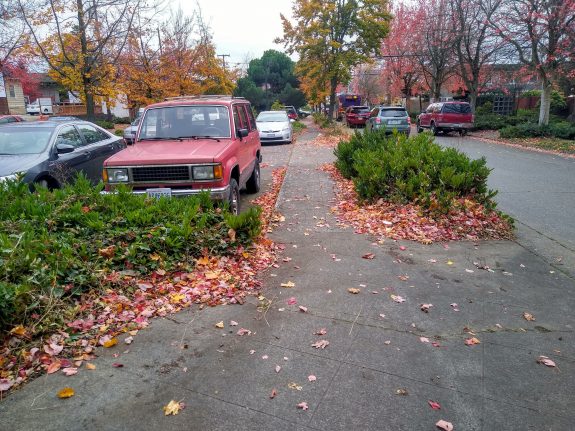 The Beacon Hill bike route is one of three major bike routes currently moving forward after years of advocacy by the Bicycle Advisory Board and other Seattle bike advocates to improve connections between Southeast Seattle and the rest of the city. Making sure the connections are well-designed is also pretty important.