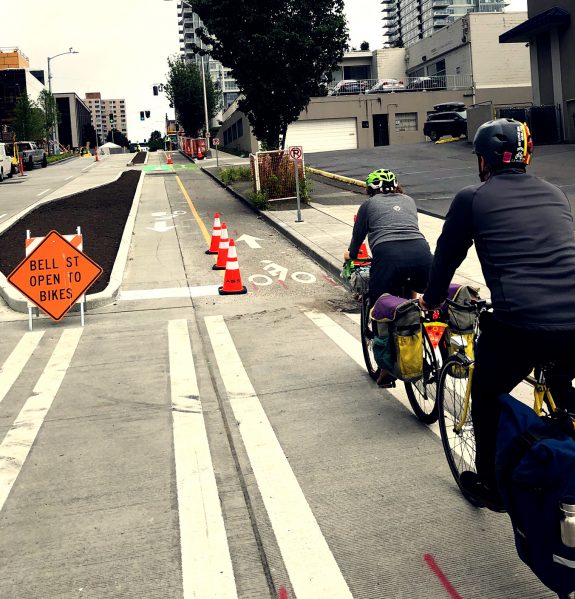 From Google Maps, which does not yet automatically recognize the route as of press time.

Seattle is only one block away from completing a connected bike route through downtown from the International District to Fremont and the Burke-Gilman Trail.

This project has been the result of so much work by so many people (too many to name, but obviously Cascade Bicycle Club, Seattle Neighborhood Greenways and individual advocates like so many of you). Years and years of advocacy and passing funding measures have led to this point. Sure, it’s taken a lot longer than originally hoped, and sure there will still be some incomplete details due to budget cuts and construction zones. But it’s almost finally here.

The key to connecting the 2nd Ave bike lane to the temporary 9th Ave bike lanes is making Bell Street a two-way street for people biking. For years, people have had to bike in mixed traffic on Blanchard Street, but not any more. By designating Bell Street Park a “Stay Healthy Street” between 1st and 5th Avenues, car traffic has been limited and people can bike both directions.

Meanwhile, SDOT crews have poured curbs to create a two-way bike lane on the north side of the street from 5th to 6th and 7th to Denny/9th. That leaves only the single block between 6th and 7th Avenues missing from a complete bike route that seemed like a dream a decade ago when I started writing Seattle Bike Blog. 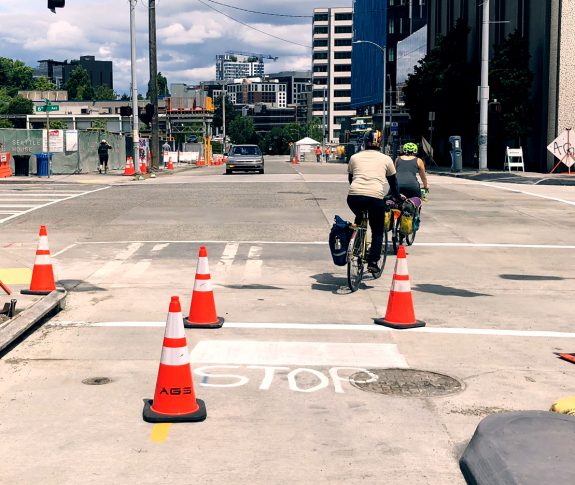 Approaching the only missing block of the bike route, between 6th and 7th Avenues.

SDOT says they will install a temporary bike lane in that block as early as next week, and the construction project across the street will be responsible for building the final version. It may also take a couple more weeks to get the temporary traffic signals functioning (until then, people biking should follow the walk signals). And budget cuts may impact delivery of the permanent traffic signals.

But give SDOT credit here, they are making this connection happen with what they’ve got to work with. Hand-drawn bike lane symbols have become a meme, and I just want to say I love them. Mayor Durkan has pulled the bike budget in response to COVID-19 budget shortfalls, but SDOT crews are going to finish this one bike route dammit. They will paint this shit by hand if they have to. So, bike lane artist and everyone at SDOT who has worked so hard to make this happen, thank you.

Though the COVID-19 crisis will prevent the city from having the proper community celebration this bike route completion deserves, Seattle Bike Blog would like to thank everyone who has dedicated time and energy pushing for what once seemed impossible. The work to create a bike network that reaches everyone’s homes and destinations is far, far from over, but this route is a strong backbone.

15 Responses to With just one block missing from the Bell Street bike lane, Seattle’s ID-to-Fremont bike route is nearly complete