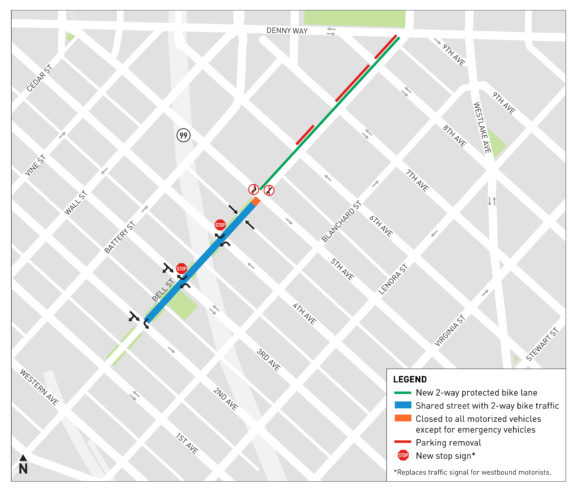 Bell Street has been a major westbound bike route through the Denny Triangle and Belltown for a long time. As the most obvious relatively low-traffic connection between 7th and 2nd Avenues for people biking southbound into downtown, Bell is a major connection in the Basic Bike Network.

So it is great news that SDOT has announced a date to complete construction on a new bike route on Bell between 2nd Ave and Denny Way: Summer 2020.

A four-block section of Bell Street was completely remade in 2014 into a city park, though one that still allows car travel. The curbs were removed and turned into clever street furniture, creating a street that feels more like a place to hang out. And it mostly works that way. Belltown needed more public park space, and using this street space to create a park was fairly inventive.

But it is not car-free, and car traffic can still be heavy enough at times to make it feel more like a street than a park (thus it is sometimes referred to as the “Bell Street Park For Cars”). People are not supposed to drive more than a block through the park, allowing people to access alleyways and park. Signs at each intersection show turning arrows only (except transit and bikes). But people ignore this rule all the time, which really holds the park back from being as cool as it could be. A street that should be very slow and low-stress can still feel stressful when someone driving is using it as a cut-through.

But while Bell has no bike lanes, at least it is better than its eastbound counterpart Blanchard. Traffic is a bit heavier on Blanchard, though it is not as heavy as many other downtown streets. But it is far from an all-ages-and-abilities bike route.

That’s where the Bell Street project comes in. By making improvements to the park and creating a new two-way bike lane between 5th Avenue and Denny Way, the city will both improve westbound biking on Bell and create a new eastbound bike route option. And since Bell Street turns into 9th Ave N north of Denny Way, these new bike routes will connect to planned protected bike lanes on 9th. And 9th connects to the Westlake Bikeway, and … hey, this is starting to sound like a fully connected bike route!

The new protected bike lane between 5th and Denny will be a two-way lane on the north side of the street. This, of course, means the city will need to figure out quality transitions at 5th and 9th.

The park between 2nd and 5th will allow two-way biking, and new traffic controls will direct people driving to turn off the street. And these are the details that will truly make or break this concept. If the only people driving on the street are accessing the buildings on that block, then there’s no reason this plan wouldn’t work. But if the traffic diverters don’t sufficiently enforce this restriction, we know people will just ignore them. And it will especially feel uncomfortable to bike eastbound if lot of people continue driving westbound like today.

The good news is that the city will have more options for traffic diversion available because Metro will be rerouting buses that currently use Bell. The need to accommodate buses through the street has prevented the city from installing physical diverters that force people driving to turn.

If SDOT and Seattle Parks get the details right, we will finally get to see the true potential of the Bell Street Park. And they’ll make a vital bike connection while they’re at it. Pretty cool.

The design will be final soon, and the project team will be at 5th and Bell from 4–7 today (Thursday) talking about it. You can also email your thoughts or support to [email protected].

Founder and Editor of Seattle Bike Blog.
View all posts by Tom Fucoloro →
This entry was posted in news and tagged bell street, sdot. Bookmark the permalink.