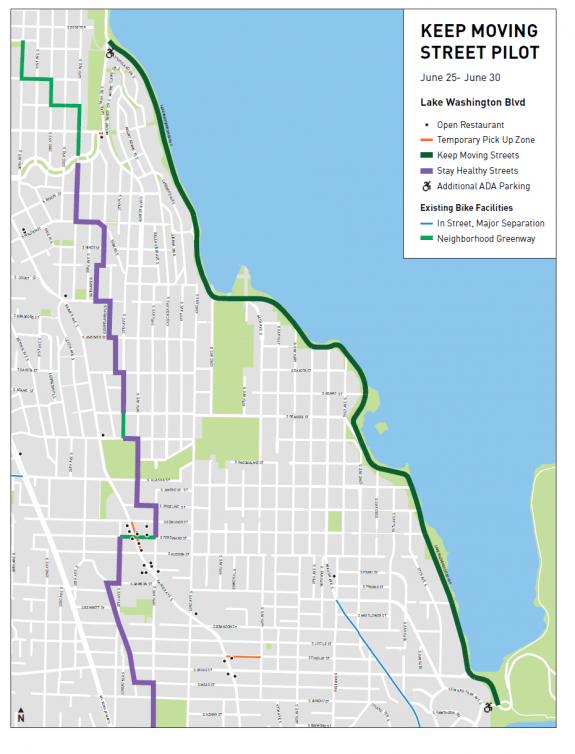 Lake Washington Blvd has been the most-requested street for the city’s car-free and car-light street projects, which started as a response to the COVID-19 outbreak and the need to create more space for people to safely distance while getting some exercise or fresh air. And now SDOT and Seattle Parks are experimenting with what is basically a five-day-long version of Bicycle Sunday, closing the street to cars between Seward Park and Mount Baker Beach.

The pilot, dubbed a “Keep Moving Street” project, is among the city’s most ambitious projects yet. Unlike the city’s “Stay Healthy Streets,” which follow slow residential neighborhood greenway routes, Lake Washington Blvd is not a particularly low-traffic street, though nearly all homes and destinations have other route options. People can still drive on the street to access their homes and get deliveries, and people are already very familiar with how this works because Bicycle Sunday has been happening every summer for half a century. So there is a lot of community buy-in already.

The street is also a huge and, hopefully, high quality expansion of open space in south Seattle, where the city has long neglected to invest in safe streets and open public space. The existing walking path along the lake is far too skinny for people to pass each other while giving at least six feet of separation, so the open street provides that space.

@MayorJenny @seattledot thank you for opening this waterfront for people. Let's keep it this way! pic.twitter.com/983GMFFuec

Lake Washington Blvd is also part or the regional Lake Washington Loop bike route, a very popular route for regional and local bicycle recreation and transportation despite the fact that traffic can be very stressful on the street. There is no bike lane, and even though most people driving expect people to be biking there and give enough space when passing, there are always a few people who are either careless or cruel.

There has long been a need for safety changes to the boulevard, and hopefully this pilot can turn into something more permanent. The Bicycle Master Plan calls for painted bike lanes, but there is not room for bike lanes (and the road would need to be repaved since the road edges are deteriorating, money the city does not have in the budget). The only affordable way for bike lanes to work would be to make the street a one-lane or one-way street for general purpose traffic, using the other half of the street for bike lanes or a lakeside two-way bikeway. The street could also just become a permanent Stay Healthy Street. Or the city can use a mix of both ideas where appropriate. 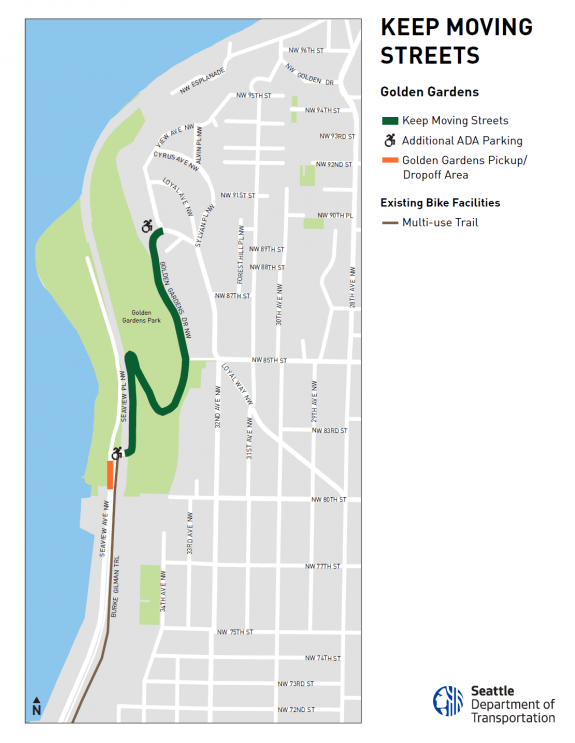 SDOT and Seattle Parks are also turning the forested and winding Golden Gardens Dr NW into a 24/7 Keep Moving Street until further notice. This street really does not serve much of a purpose for car travel so long as Golden Gardens Park remains closed to car parking to reduce crowding. And the main alternative for people walking down the steep hill is a skinny staircase without room for people to pass each other with enough space, so the added space should help. And the city is seeking feedback on the projects:

While Golden Gardens is 24/7 until further notice, Lake Washington Boulevard is a 5-day pilot to see if it might be worth extending the closure into the summer. Email [email protected] and let us know if people #KeepMoving, share the road well, and why or why not you’d like to see the closure extended throughout the summer.

You can also complete their online survey.

SDOT is also expanding is Stay Healthy Streets program, adding new routes in Wallingford and Cedar Park and extending the existing Beacon Hill route to connect from Georgetown to the I-90 Trail. This brings the total mileage to 27 miles of car-light streets. 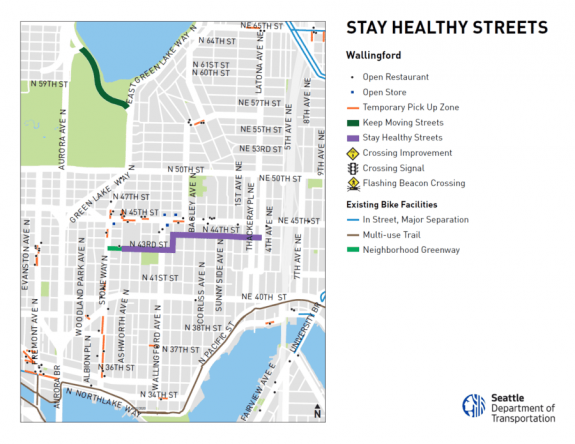 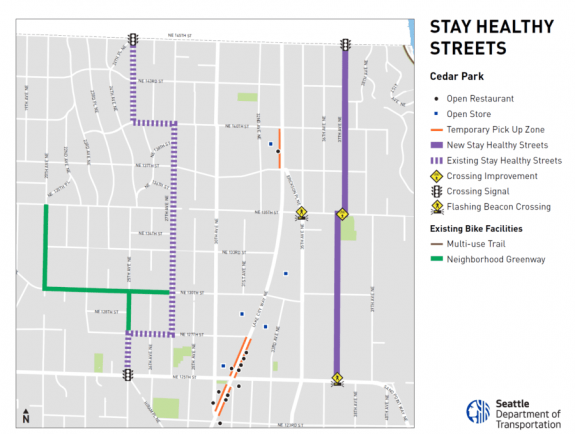 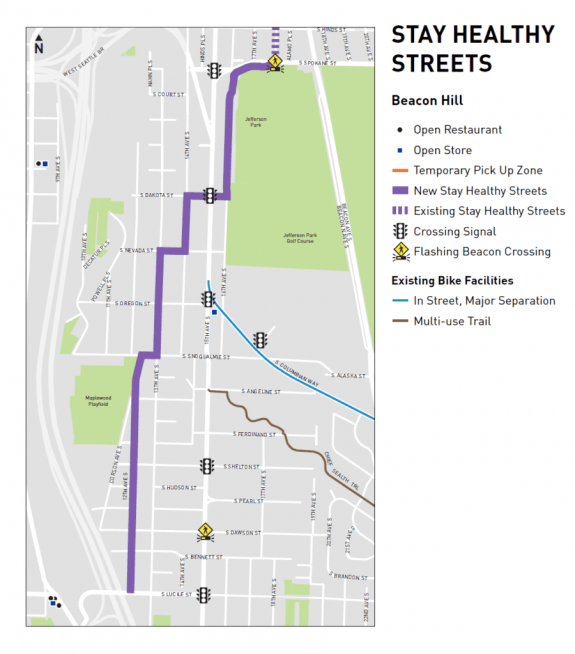 More details on the city’s process for making projects permanent and SDOT’s efforts to understand what “safe” means for everyone, including BIPOC who “do not always feel comfortable traveling along our streets due to racism”:

You may be asking what does permanent mean and how will streets be selected?

At the most basic level, it means installing permanent signs at each intersection. Treatments can vary depending if the location is a busy intersection, or if there are sidewalks.

Beyond that, we want to work with the neighborhood to understand how the streets could become part of the neighborhood character. This could be celebrating cultures that have been there over the decades, landmarks, bringing people together around street murals, and whatever else is highlighted as important through community discussions.

It also means everyone traveling along the street feels safe. People choose different travel modes depending on abilities and needs. Blacks, Indigenous people, and people of color do not always feel comfortable traveling along our streets due to racism. No matter where you live, or whether you use a Stay Healthy Street, help fight racism and become an ally and help make Seattle streets for everyone.

Take our online survey and tell us what your experiences with Stay Healthy Streets have been like, where you might like to see them become permanent, and help us form our community engagement plan to center equity. The survey will close on July 15.