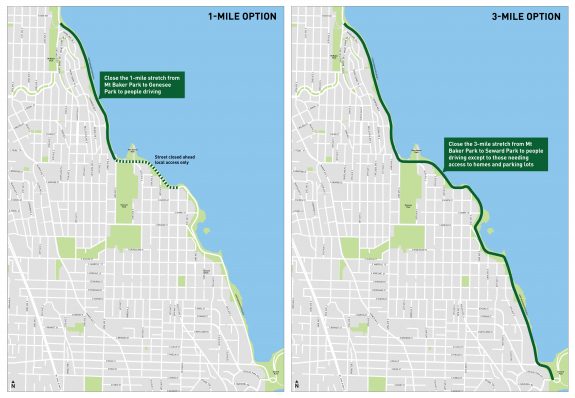 Well this is an easy choice. Take the survey before May 10!

The city may close a three-mile section of Lake Washington Boulevard to most motor vehicles (people accessing homes and parking lots allowed) from Memorial Day to Labor Day. This would be like making every day Bicycle Sunday.

You can support this idea by taking SDOT’s online survey before May 10.

Seattle already has more than 50 years of experience with Bicycle Sunday on this stretch of the roadway, and the city’s experiments making it a Keep Moving Street in the past year have been popular. Seattle Neighborhood Greenways launched a campaign and petition in early April calling on the city to come up with a permanent concept for the street. 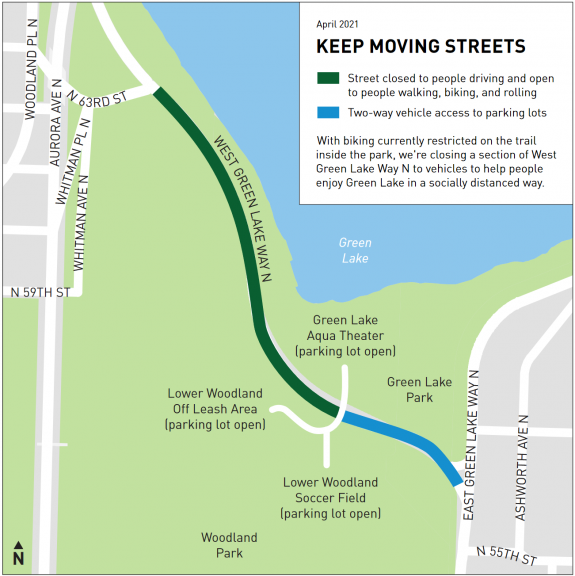 The Keep Moving Street on West Green Lake Way N will be modified this week to allow for car access to the parking lots on both sides of the street.

These lots were closed in the early days of the pandemic in an effort to reduce crowding at the park. Information since then has suggested that only a very small percentage of the total transmissions have happened outside in the open air. Of course you should still follow guidelines regarding masks, giving people space and avoiding crowds, but indoor areas and confined spaces are by far the biggest COVID transmission spots. In hindsight, Seattle Parks probably didn’t need to clamp down on park use as heavily as they did last year (closing nearly all parking lots and playgrounds, for example), but nobody knew for sure how it spread and so they understandably played it extra safe.

This Keep Moving Street originally took advantage of an already-planned extended closure of the intersection with East Green Lake Way N for road construction. With that intersection and the parking lots closed, there was no reason to keep the street open to cars. Now that work on the intersection is wrapping up and the parking lots are open, the modified Keep Moving Street is great news because it shows that the city is committed to the idea even without to construction closure. Now we just need to extend it further north… 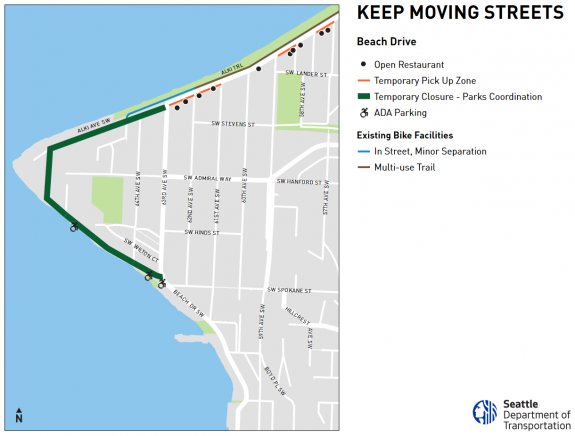 The city is seeking funding to make the Alki Point Keep Moving Street permanent. In the meantime, the temporary version has been officially extended until spring 2022 at least.

There will be some kind of outreach effort about this project coming up, so sign up for the email list on the SDOT webpage to stay in the loop.

This one’s sort of a double-edged announcement. Golden Gardens Drive NW was a Keep Moving Street for a while last year, but it has been reopened to car traffic for a while. However, SDOT and the Parks Department are threatening to close the parking lots at Golden Gardens again because they observed too much crowding and a lack of mask wearing there. The plus side is that if the parking lot is closed, the street will go car-free again. So…yay?

Seattle Parks and Recreation (SPR) observed crowding and mask-noncompliance at Golden Gardens Park during the recent warm, sunny weekend, and are considering closing the parking lots and reopening Golden Gardens Dr NW to people walking. Regular communication between SDOT and SPR will determine whether to move forward with this Keep Moving Street.