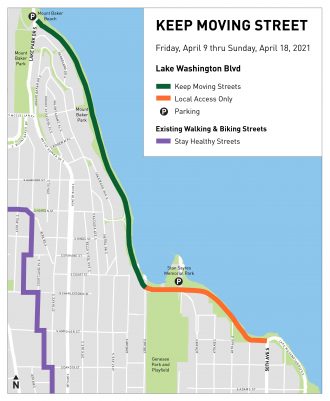 Lake Washington Blvd is reopening to people walking and biking Friday as the city’s Keep Moving Street program returns. The street will remain mostly car-free between Mount Baker Beach and Genesee Park from April 9 through 18.

Seattle has experimented with various versions of this Keep Moving Street for the past nine months, and they have been very popular (see the video above). Every time they shut it down and allow car traffic to take over, it’s a huge loss. So Rainier Valley Greenways is running a campaign to extend the project to Seward Park, keep the project open all year and to work with community to come up with a permanent design for the street that enables comfortable walking and biking on the street in some fashion.

There is no equivalent to the Burke-Gilman Trail in South Seattle, so a permanent route along Lake Washington Blvd would be huge for all ages and abilities biking access in the neighborhood. But it’s not just about biking. The open street also increases public access to the whole waterfront, an incredible public asset. It’s like an accessible extension of the lakefront park.

Additionally, Seattle Parks has been hosting Bicycle Sunday along the street for more than half a century, so this is not a major new concept. If anything, starting and stopping the program is more disruptive and confusing than simply leaving it in place.

So, I urge the city to open up LWB to people from Mt Baker to Seward Park, keep it open all year, and conduct equitable engagement to create a permanent design: