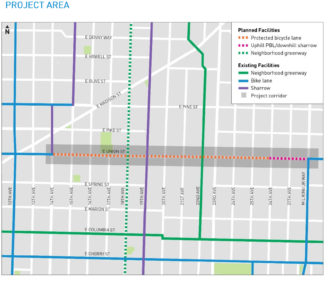 Thanks to everyone who voiced their concerns about SDOT’s incomplete plans for E Union Street bike lanes in the Central District, the project team has changed their designs to now extend the new bike lanes through the intersection with 23rd Ave.

You can support the complete bike lanes by completing the project survey by February 7.

Union is already a very popular street for biking even though its paint-only bike lanes disappear and reappear constantly between Madison St and 34th Ave in Madrona. It’s just the only east-west street in the area that goes all the way through without dead-ending into a major institution (like Seattle University) or turning into a staircase (Pike St). So protected bike lanes on Union are one of the highest-priority bike improvements for the neighborhood.

The design released last spring showed protected bike lanes from 14th Ave to 22nd Ave, then people biking would have been directed to either mix with car traffic (defeating many of the benefits of a protected bike lane) or use the busy sidewalks in the 23rd and Union business district.

Needless to say, people were not pleased with those options. The Urbanist was able to obtain project survey results that showed more than 600 of the 877 responses the project team received were from people calling for completing the bike lanes. The Central District has among the highest bike commute rates in Seattle, and Union is a key link to and through the neighborhood. So it’s no surprise that response was strongly in favor of complete bike lanes.

Capitol Hill Seattle reports that the key trade-off and conflict around the bike lane connection is car parking, though the major Midtown Square development will more than make up for any parking reduction:

Wednesday night, SDOT representatives said the updated design would only require the loss of five existing street parking spots at the key 23rd and Union intersection. Some of that may be able to be mitigated by the opening of the Midtown Square development across the street. That three-piece, seven-story mixed-use apartment development with 428 market-rate and affordable apartment units and a quasi-public central plaza will include a huge underground parking garage when it opens in fall of 2021.

But this project removes very little parking. A project map counts individual spaces that would be removed. The total for the whole project? 11. That’s an average of less than one space per block. The total for the 23rd Ave area? 3.

It is definitely worth the trade-off here since it will make it easier and safer for people to bike to neighborhood businesses. There’s no question that complete bike lanes will bring more people than three car parking spaces. 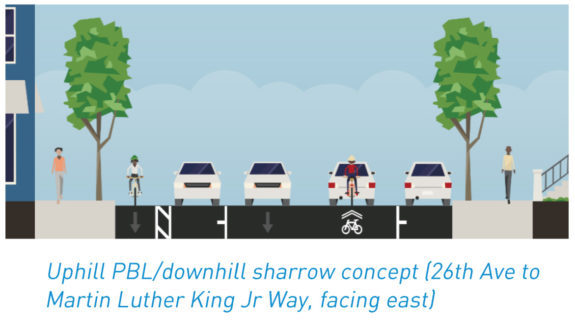 Unfortunately, the project still does not have fully complete bike lanes because the eastbound/downhill bike lane is planned to disappear for a few blocks starting at 26th Ave and crossing MLK Way. This is especially frustrating since 27th is designated as a future neighborhood greenway in the Bicycle Master Plan and MLK technically has bike lanes (though they are old, far too skinny and honestly pretty worthless). Union also continues to be an important bike route east of MLK. So why stop the eastbound bike lane two blocks before being complete? If we’re going through all this work now, we should do it right.

CHS also reports that the project team is working with the Seattle World School (old TT Minor building at 18th Ave) school buses off Union and onto E Pike St to avoid conflicts with the bike lane.

The project is nearing the end of the design phase, and the turnaround is fast. Construction is planned this summer.

UPDATE: Here’s a Seattle Bike Blog video about the project: