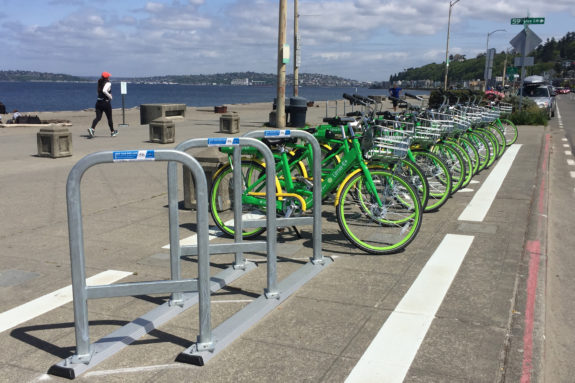 In June 2018, 4% of bike share bikes were parked in a way that impeded a walkway or curb ramp. Today, that figure is fewer than 2%, according to the latest SDOT bike share audit, the Seattle Times reports.

Bikes impeding on the safety and accessibility of our sidewalks is a problem. Yes, people do far worse with cars all the time (and cars are a lot harder to move out of the way than bikes), but that doesn’t mean it’s OK for bikes to also block sidewalks or cause tripping hazards or obstructions for our neighbors with disabilities.

But in recent reporting, I feel like it is important to note that not only are there solutions in the works, but bike parking habits are improving fairly significantly. The improvement is likely due to a variety of factors: 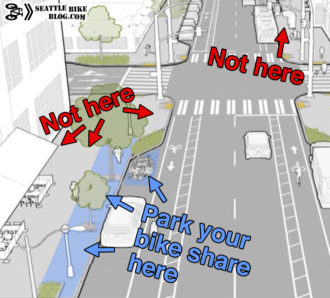 In fact, the city has responded to the low non-compliance rates by (rightfully) moving the goal post to make the standard for bike parking more stringent. By their new metric, 14% of bikes are causing problems. This is important, because now there is a new goal to work toward.

And it is important that companies and SDOT work together to increase compliance through further public education and by providing more designated bike parking space. Much of the bike share permit fees, which are significant, have been earmarked for bike parking installation, which will be an ongoing effort to continue improving the bike parking supply over time.

And you all can help out by moving any bikes you see improperly parked as a favor to your neighbors.

A larger percentage of bikes are technically parking incorrectly, but aren’t in a place where they would cause an issue.

Designated bike parking is still grossly inadequate for the demand in most parts of the city. And the city needs to especially focus on on-street bike parking, since installing bike racks is more difficult on crowded sidewalks. The parking lane on a street is public space intended for the parking of vehicles so that they don’t impede space for people, so that’s exactly where our bike parking belongs. If there were a bike corral at every business district intersection, for example, that would take a lot of stress off limited sidewalk space. And if a bike falls over in an on-street bike corral, it likely won’t impede anyone’s walking path.

Bike share continues to serve a huge role in increasing the number of trips people are making in our city by bike. Thanks in largely part to these services, more people are biking in Seattle than ever before. And the numbers continue to grow. Along with this growth, though, comes the need to continue getting better about bike share parking. And I also hope people keep some perspective here, since cars remain the biggest impediment to safe walking in our city by a long, long shot.

This entry was posted in news and tagged bike parking, bike share, sdot. Bookmark the permalink.

10 Responses to Bike share parking still an accessibility issue, but it’s getting better