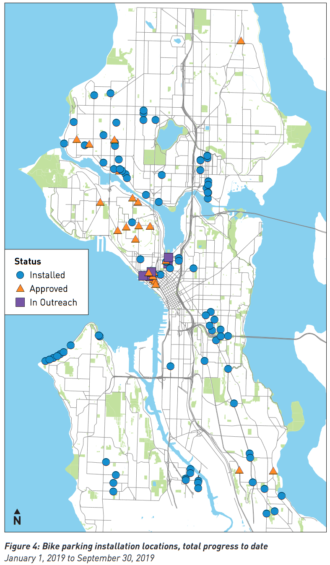 SDOT has been adding a ton of additional bike parking. Could that be part of why poorly parked bikes are becoming less common?

The city’s quarterly audit of bike share parking (PDF) found a massive 57% drop in the percentage of Jump and Lime bikes parked incorrectly.

Of 756 bikes audited (approximately half Lime and half Jump), staff found only one (0.1%) that was an “ADA-prohibited obstruction hazard,” basically bikes that don’t leave a minimum of four feet of walkway space. This is way down from the 13 (1.6%) found in the second quarter of this year. 5.3% of bikes were deemed “obstruction hazards,” meaning they were obstructing a walkway or curb ramp, but not completely blocking it. This is down from 17.4% in the second quarter.

What could explain such a big decrease in poor parking? I can’t say for sure, but I have some theories.

Rooted In Rights produced a great video for SDOT explaining not only where to properly park a bike, but also why poorly-parked bikes create such problems for people with disabilities. It’s been viewed 5,000 times on Youtube, so that’s pretty decent exposure. And while I’m sure the video inspired some people to do a better job of parking bikes, I bet it also inspired people to move poorly-parked bikes when they encounter them.

The companies have also made more efforts to encourage proper parking, and perhaps most importantly, Lime even requires riders to take a photo of the bike when they are finished to prove they parked correctly. I find this to be very effective because it not only creates a record, but it also forces users to stop and think about whether their parking job is OK. Just the act of taking a photo forces you to take another look.

And the city has also dramatically expanded the number of bike parking spaces for both lock-to bikes (like a personal bike) and wheel-lock bikes (like bike share). About 75% of the 1,000 or so new spaces are in the form of on-street bike corrals, which have the added benefit of keeping bikes off sidewalks entirely. So even if a bike falls over (wind, bumped by a passerby or pushed over), it is unlikely to fall into the walkway like even properly-parked bikes on the sidewalk sometimes do. SDOT’s goal is to hit 1,500 new bike parking spaces by the end of the year, a very significant increase. 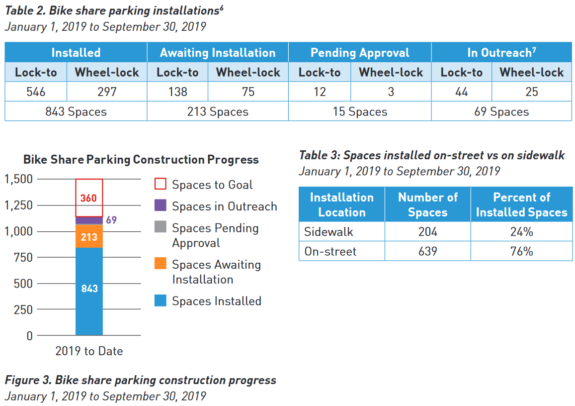 There may also be a more cynical contributor: Fewer bikes are working, and it’s hard to park a bike poorly if you can’t ride it in the first place. Lime especially struggled in the latest audit with a very rough 63% of their bikes unrentable by auditors due to various maintenance issues or dead batteries, compared to 35% of Jump bikes. So, yeah. That’s not great news.

Lime also recently increased their prices to $1 to unlock + 29¢ per minute (though you can now get half-price rides if you use an N26 online bank account to pay. But that means you have to open a new bank account and keep it stocked with enough money to cover your Lime rides, so this is a test of how badly you want that 15¢/minute rate). Jump remains 25¢ per minute with no fee to unlock.

Lime also recently decided not to renew its permit to operate bike share in Bellevue.

The report also notes that Lyft has been permitted to operate bikes in Seattle, but has not yet done so (Lyft bought CitiBike and former Pronto operator Motivate. Uber owns JUMP). So maybe we’ll have a third competitor at some point.

Despite all these issues, reported bike share ridership was solid in the third quarter, clocking over a quarter million rides per month during the summer and bringing the total for the first three quarters of the year up to 1.6 million trips on about 7,000 bikes (the exact number is always fluctuating, and the number in service and rentable at any given time is much lower). 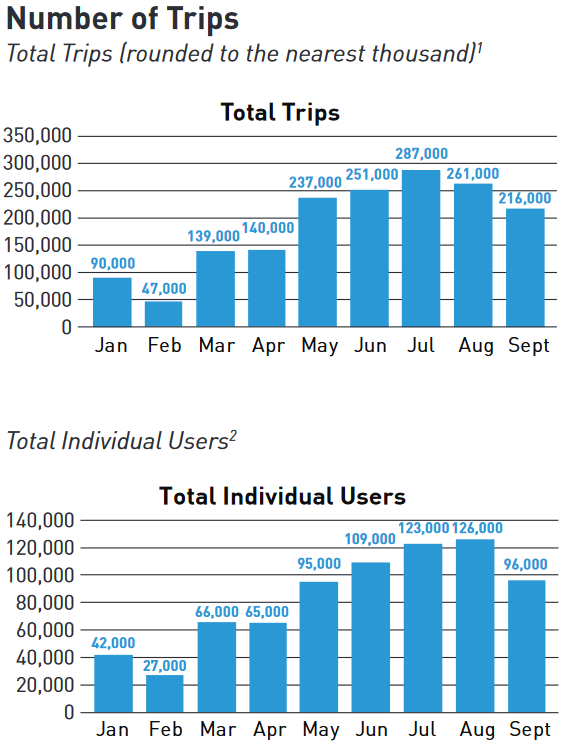 Bike share has finally settled into a lull after years of wild and dramatic changes. It’s been just Lime and Jump for a whole year, and all bikes have been electric. Prices have creeped up, bike counts have gone down, but use seems fairly stable (in number if not in geography). I have no idea how the companies’ financials look, but the services are getting used.

And while bike share has been a major force behind the big increases in bike trips in our city in the past couple years, it’s not solely due to all the people riding bike share bikes. It seems that total bike trips are increasing far beyond the bike share ride numbers. So that could mean that people are riding bike share, liking it, and then buying (or fixing) their own bike. Or maybe just having more people biking is creating a safety-in-numbers effect that makes biking seem more inviting because more people are doing it. It’s hard to know exactly.

But this bike share calm is only temporary. Seattle is expected to begin permitting scooters early next year, so the whole dockless mobility service thing is about to blow up all over again. Companies, including both Lime and Jump (but especially Lime), have been pulling bikes from markets and focusing more on scooters. But Seattle has a unique thing going with dockless bike share, so I’m curious whether companies will keep working on their bike share services here alongside scooters. I certainly hope so.

This entry was posted in news and tagged bike share, jump, limebike, sdot. Bookmark the permalink.