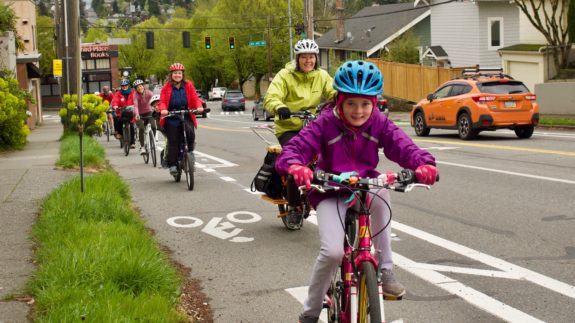 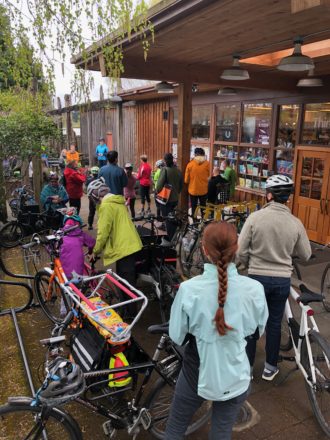 People gathered at the start of the ride. Photo by Seattle Bike Blog.

Unlike the $4.4 million advertising budget and public fanfare celebrating the new SR 99 car tunnel, no official celebration or encouragement campaign was planned for a major new set of protected bike lanes on NE 65th Street. So excited community members decided to plan their own.

Dozens of people of all ages got together Sunday at Third Place Books at 20th Ave NE and NE 65th Street, the eastern terminus of the newly-completed lanes that have been years in the making and the result of a very tough neighborhood debate.

After a very frustrating week, with people protesting Mayor Jenny Durkan’s decision to cut bike lanes on 35th Ave NE and release a near-term bike plan with even more big cuts, Sunday’s community ride was a much-welcome display of positivity and progress. It felt like a glimpse into an alternate reality in which the city had continued building planned bike lanes rather than delaying or cutting them. It was a happy and powerful demonstration of what a bold walk/bike/transit vision looks like in action. 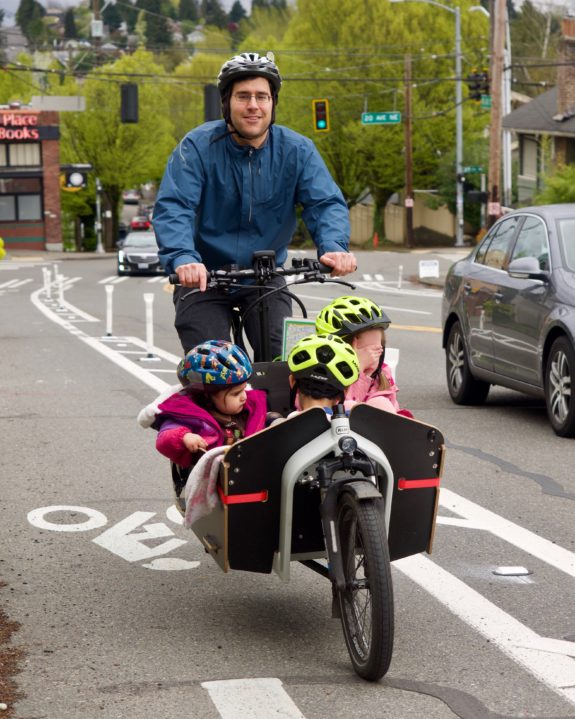 Riders stopped halfway through the ride to pay their respects at 15th Ave NE, where Andy Hulslander was struck from behind and killed in 2015. A father of two, Hulslander’s death was one of several deaths on NE 65th Street that led the community to demand this safer street design. His death is also a reminder of why projects like this planned across the city are urgent public safety improvements. They prevent collisions that seriously injure or kill people. 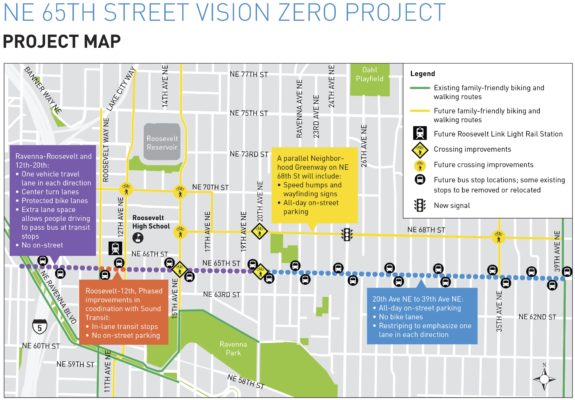 NE 65th Street is a vital and difficult bike connection. It provides a rare crossing of I-5, which is the biggest barrier to biking in every neighborhood it plows through, and passes Roosevelt High School and the under-construction Roosevelt light rail station. It connects to many major bus lines, with the promise of being an even more important transit hub in coming years. The street also passes through a business district and connects to the existing Roosevelt Way and Ravenna Blvd protected bike lanes.

But these multimodal and commercial challenges are exactly why the bike lane works so well. Biking, transit and business are not in conflict, they are complementary. Rather than avoiding mixed uses on a single street, the city should be seeking out these opportunities. A street that is for everyone is stronger in every way.

Sure, there are some compromises in the design, but the result is incomparable to the way things were. Being able, for the first time ever, to bike on NE 65th Street without constantly looking over my shoulder unsure if someone passing would give enough room (or worse) was simply liberating as someone who has biked the street many times. But the biggest benefit the bike lane brings to the neighborhood is the way people who never would have considered biking on the street before now have that option open to them:

Today was the first time I've ridden a bike on #Bike65th ever–after living in this neighborhood for 15 years. And then my kids and I did it again later in the day for errands at Roosevelt Square. These bike lanes are going to change everything. https://t.co/A79B31Oa4R

This bike lane empowers its neighbors with new options for getting around. And that’s the promise of the Bicycle Master Plan: People living in every Seattle neighborhood should be empowered like NE 65th Street neighbors are now.

And this was a common topic of discussion among people on the ride: How do bike and safe streets supporters pivot from being angry at the mayor’s cuts to a place where people are celebrating progress like this instead? Last week’s protests and City Council testimony finally got the mayor’s attention, so now what? Nobody wants to protest and fight for the rest of her term, burning through vital Move Seattle funding years with limited progress. But there was also a sense that people don’t believe she has any interest in celebrating successes like this bike lane, which leaves people feeling like protest and negative feedback is the only method that works.

The fact that nobody from SDOT or the Mayor’s Office showed up to join Sunday’s ride was pretty telling. Here are a bunch of people celebrating the city’s work, and they don’t care enough to even show up?

Advocates for safe streets are holding out olive branches all over this city. But it is on the mayor to take them. Nobody else can fix this situation. It’s her move. She could, for example, pick a bold project or two (Beacon Ave S, Rainier Ave, 12th Ave south of Yesler, Fauntleroy Way, 5th Ave in the ID, etc) from the recent cut list and make it a true priority on an accelerated timeline. She could also make it clear that 35th Ave NE did not set a precedent, and that she’s not interested in cancelling other bike lanes already in design, like N 40th Street or Wilson Ave S.

That would send a solid signal that she really does want to back up her words when she says things like “We have to get people out of their single occupancy vehicles…A city of the future needs walking, biking, transit.”

Big thanks to organizers Inga Masnkopf and Oralea White, and everyone who worked so hard to make these bike lanes happen in the first place, including former Councilmember Rob Johnson who joined the ride. There’s still a lot of work to do, but it’s so important that people take the time to celebrate success and remember why all this hard work is worth it. 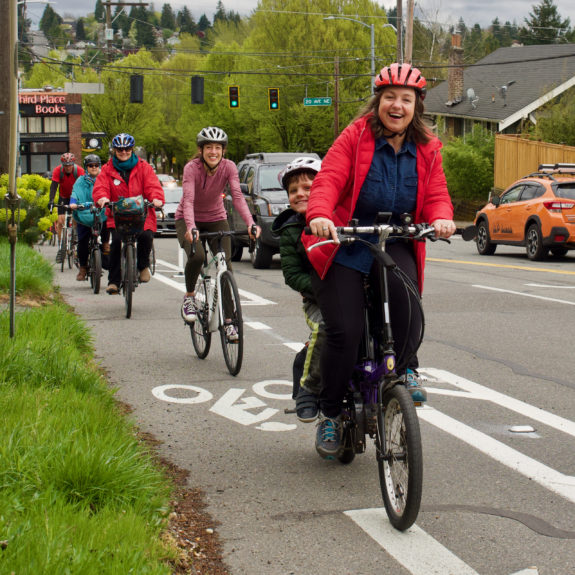 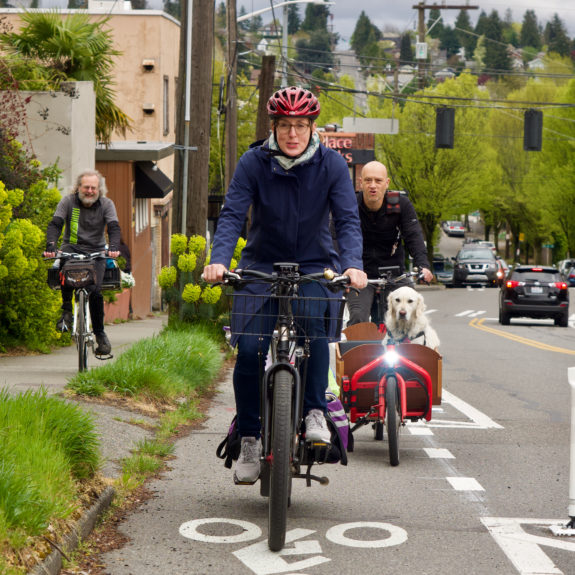 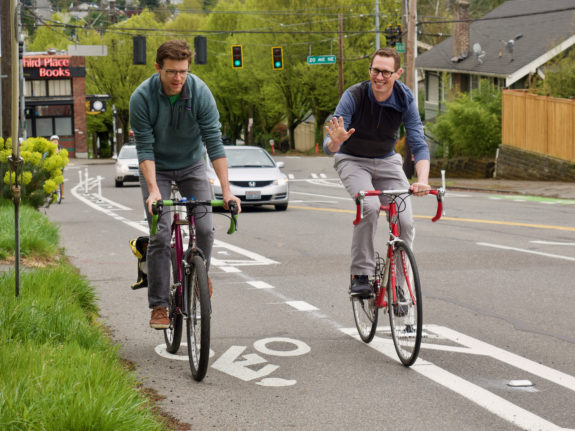