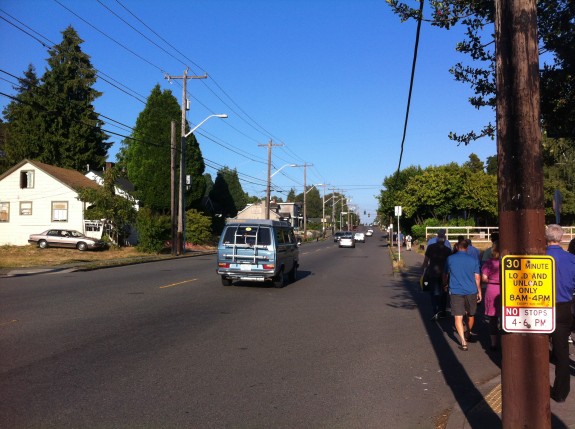 Image from a 2013 community walk to discuss the dangers of NE 65th Street. Photo taken during rush hour. There is plenty of space for safe bike lanes. 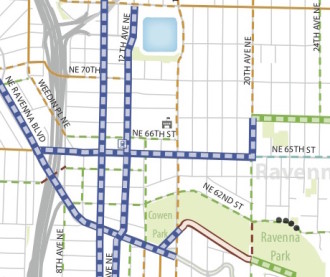 It’s well past time to make NE 65th Street safer for everyone. A community walk Thursday plans to call for exactly that.

The #Fix65th Safety Walk starts 8 a.m. Thursday at 12th Ave NE and NE 65th St. Councilmember Rob Johnson (District 4), who has been leading efforts within City Hall to improve safety on the street, will also be there. You can also sign this petition calling for changes.

We wrote pretty extensively about this street back in 2013 when there was a significant backlash against the Bike Master Plan’s vision for protected bike lanes on the entirety of NE 65th from Magnuson Park to Green Lake.

There has been a ton of difficult community building and neighborhood debating about this street. It hasn’t always been pleasant, but that’s sometimes what change looks like. It’s hard, and not everyone agrees.

Then Lucas McQuinn chose to drive drunk and killed Andy Hulslander at NE 65th Street and 15th Ave NE in July of last year. A protected bike lane on NE 65th would likely have placed Andy out of McQuinn’s path. A ghost bike stands on the corner as a harsh reminder of what happens when we see a known danger like NE 65th and choose to do nothing about it.

Since then many people have been seriously injured on the street, including a man critically injured in May in a collision with someone driving a Metro VanPool. NE Seattle Greenways put together this image showing just the number of serious injuries on the street in the past three years: 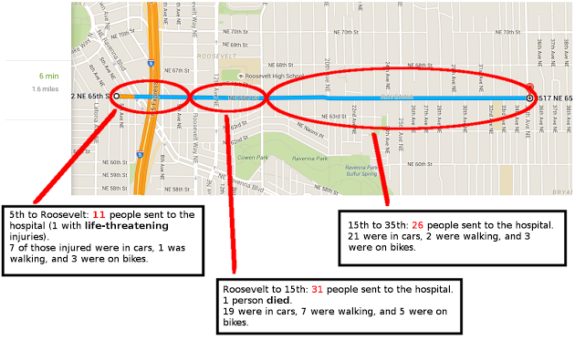 The street essentially has no design, and that’s a huge problem. Are there four lanes or two very wide lanes? Nobody seems to know. During commute hours, curb parking is restricted to create more driving space. But most people tend to travel single-file anyway (see photo at top). The only people using the space near the curb are people biking, people turning right and people making dangerous right-side passes. This is a scary mix, and it just doesn’t work for anybody.

As the business district around the future Roosevelt Station grows, it becomes more and more clear the the design of NE 65th needs to adapt, too. The wide, undesigned space on the street is terrifying to cross on foot, reducing the walkability of the area and hurting business. People avoid spaces where they don’t feel comfortable, and NE 65th is not comfortable.

But it doesn’t need to be this way. A modern redesign of the street could improve comfort and access for everyone no matter how they choose to get around. Protected bike lanes would create a vital connection from Ravenna Boulevard (and Green Lake) into the neighborhood and the future light rail station. Better crosswalks would encourage people to spend more time and money in the area. Maybe there’s even some space for on-street parking or loading zones that don’t disappear every commute.

Most importantly, we can prevent neighbors, friends and family members from serious injury or death.

Here is an excerpt from Councilmember Johnson’s blog post about safety on 65th:

This is now the second serious bike collision on NE 65th Street within one year; with last year’s death and the two current bike riders in critical condition, it serves as a terrible reminder that safety improvements along this arterial are far past due. As I stated last year on the campaign trail after Andy Hulslander’s death, even my young daughters know that this street is fast and dangerous: they argue over who gets to hold my hand as we walk along NE 65th everyday so they can stay as far away from the street as possible. I also mentioned then that we need to fix NE 65th Street before someone else is killed or seriously injured; we have unfortunately missed that mark and simply can’t continue to have tragedy dictate our neighborhood’s safety improvement investments.

My vision to address these safety concerns is to install a fully protected bike lane on 65th Street, along the entire length from Magnuson to Greenlake, connecting projects that already exist or are in development, such as Ravenna Boulevard, Roosevelt Way, the 39th Ave NE Neighborhood Greenway, and Burke Gilman Trail. At the very least, we should install Protected Bike Lanes, from Ravenna to 20th Ave NE along NE 65th Street (as well as the two planned Neighborhood Greenways adjacent to 25th Ave NE that run on 24th Ave NE north of NE 65th Street and on 27th Ave NE south of 65th Street).

Each of these improvements – which could have been a factor in preventing these collisions – can be found in the city’s Bicycle Mater Plan Northeast Sector Map (pdf), but have yet to make it into any revenue dedicated plans such as the “2016 – 2020 Implementation Plan” or the Move Seattle Levy. We need to begin making concrete steps towards Seattle’s vision for a fully connected, safe cycle network and I will work to ensure that we find the funds to move these improvements up the list of priorities.