EDITOR’S NOTE: This is Part Two of a two-part series by Andres Salomon looking at NE 65th Street safety improvements. Part One describes the urgent need for safety improvements along the part of 65th where five people have been killed and seriously injured in the past two years. Part Two looks at possible solutions. 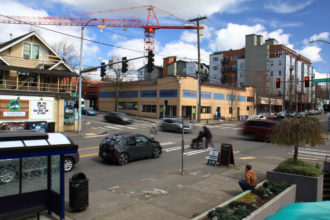 We need to determine what kind of street we want 65th to be. Photo from SDOT’s online survey.

NE 65th Street has proven to be dangerous to people walking, biking and driving. The city urgently needs to make safety improvements, as I’ve outlined in Part One. Not only are any significant safety improvements being delayed until 2019, but the improvements proposed by SDOT do not go far enough.

An SDOT survey is live now through June 1, so be sure to fill it out and let the project team know that we urgently need real improvements to NE 65th. You can also contact city officials directly: 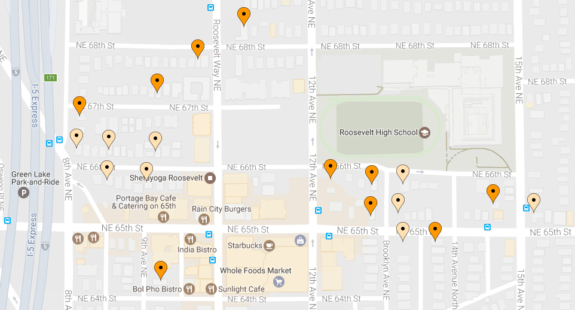 Seattle In Progress shows a huge number of new housing developments in the area.

Before diving into roadway designs, let’s first examine what NE 65th St will soon become.  Seattle In Progress shows at least 672 new housing units being built adjacent to 65th, with another 1,025 units pending approval. Most of those buildings include retail and few parking spaces, which means that we can expect many more people walking or biking to transit and shopping in the area. In four years, the Roosevelt light rail station will be opening at the corner of 12th Ave NE and NE 65th.  There are already so many kids at Roosevelt High School who take public transit every day that they don’t even fit onto the sidewalks at bus stops.

Looking at the roadway itself, NE 65th has what traffic engineers call “excess capacity.” There is more space on the street than needed to move the number of motor vehicles using it. This leads people driving to feel comfortable traveling at speeds faster than they should be going in an urban environment. It also means longer crossing distances for pedestrians and “no room” for bike lanes. As a result, fewer people bike, walk or take transit.

A four-to-three road diet, like the 2013 safety project on NE 75th, right-sizes the roadway to match capacity with the actual number of road users. The result is a street that can still move cars (traffic on NE 75th actually improved after the changes), but does so much more safely.

Here are the long-term proposals put forth by the city for NE 65th: 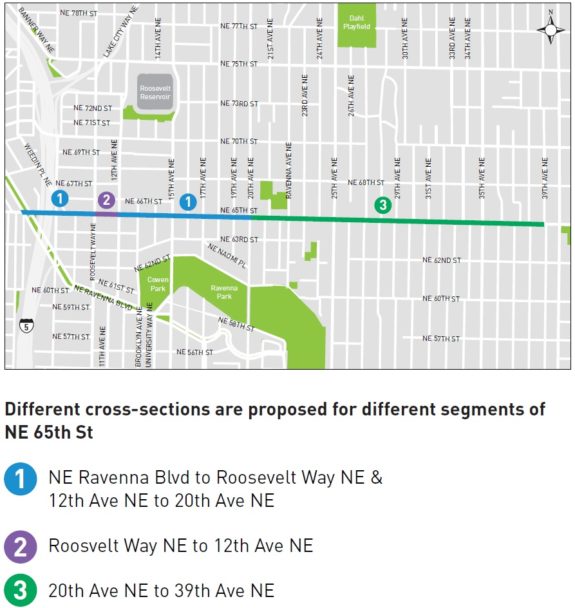 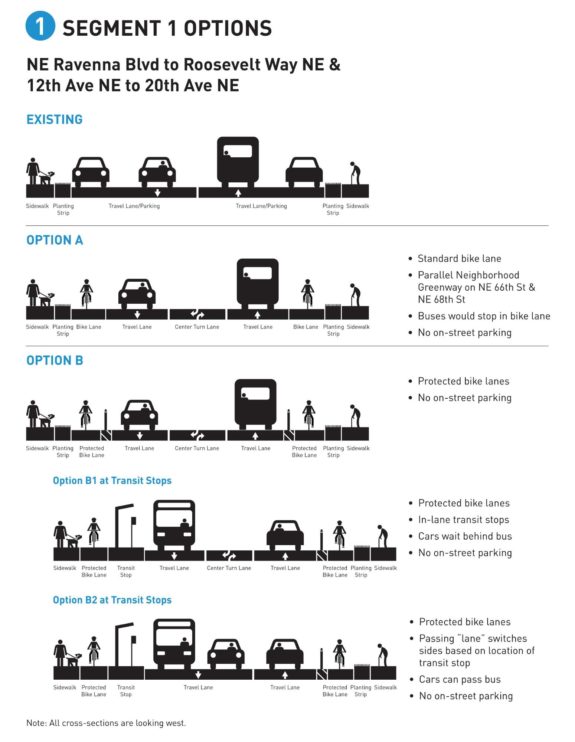 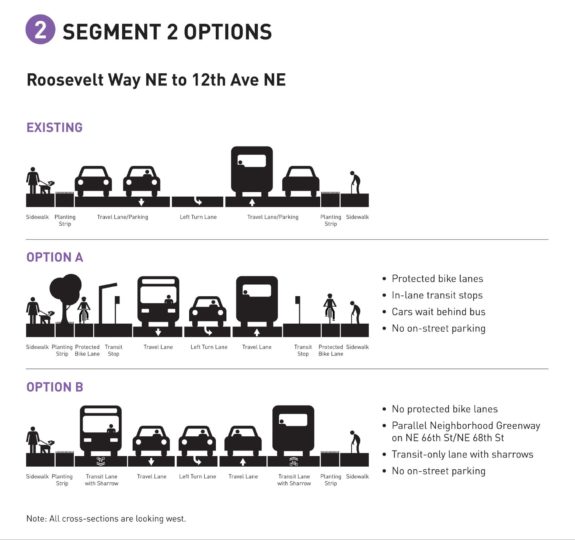 NE 65th already has lots of kids biking on it. The ENTIRE POINT of the community’s #Fix65th demands is to stop people from getting hurt and dying.  A protected bike lane between Ravenna Blvd and 20th Ave NE is simply non-negotiable, and it’s a amazing that SDOT even provided a option that does not include one.

At the same time, both options include a center turn lane for the whole length. This means that at transit stops, the roadway will actually need to be widened (removing some of the planting strip) to fit the three general-purpose lanes, the bus stop, and the sub-standard, four-foot bike lanes. 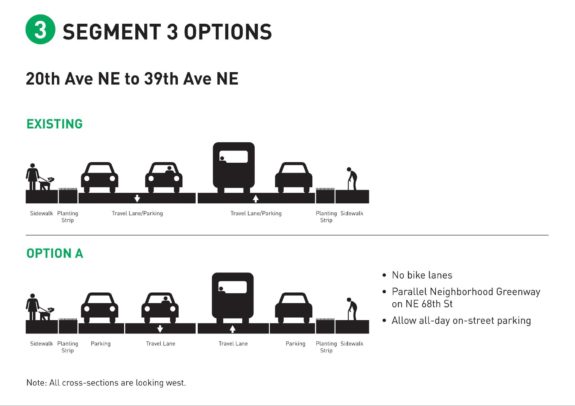 Here’s the icing on the cake: Removal of peak-hour parking restrictions is the only change proposed east of 25th Ave NE. This is a segment of roadway that is dangerous precisely because no one parks on it. Parking counts I conducted along there a few years ago showed entire blocks with one or no cars parked. NE 75th suffered from the same problem (underutilized parking), so we did the sensible thing: We removed the parking. Parking is used in the business district (20th to 25th), but east of 25th (aside from Bryant Corner Cafe) there’s little need for on-street parking.

Outside of the Ravenna business district, NE 65th has far lower traffic volumes than NE 75th. In fact, traffic levels suggest an even bolder safety project could be the best solution for NE 65th. An argument can be made that 65th only needs a center turn lane at major arterial intersections. This would lead to a slower, calmer street that is easier for pedestrians to cross. It would also provide more space for other modes.

The following options are an attempt to achieve what the community has been demanding for years: A slower, safer NE 65th that is easier to cross.  Protected bike lanes will not only make it safer for our kids and seniors to bike on 65th, they will also narrow the roadway to slow cars and shorten crossing distances. The bike lanes will also act as a buffer between car traffic and the sidewalk.

Here’s what the City could have proposed (mocked up using StreetMix. UPDATE: You make your own mixes by starting with the existing Segment 1, Segment 2 and Segment 3):

Any road diet should match our planned capacity for the corridor.  Encouraging thousands of new car trips with the addition of a 75th-style center turn lane throughout NE 65th would be a huge detriment to the neighborhood, to businesses, and to the environment.  The space that SDOT is proposing to use for a turn lane could instead be used for other purposes.  In these examples, we use it for parking.

Sidewalks are not included in these images because the City doesn’t have accurate data on the existing sidewalk widths. However, it is clear that the current sidewalks are uncomfortably narrow and not ADA-compliant in many places.  Depending on the budget and future development plans, we should consider widening sidewalks in certain spots instead of retaining parking. 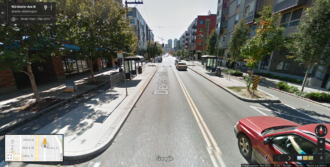 The pictured section of Dexter Ave N has the same traffic volumes as NE 65th near I-5. Image: Google Street View

Segment 1 Option D requires in-lane bus stops. With center turn lanes located only at major intersections, the roadway would function much like Dexter Ave N does today. The key differences between what the city proposes and what we’re proposing is that the sidewalks don’t need to be narrowed and the bike lanes don’t have a sub-standard width.

The stretch of NE 65th east of 25th Ave NE is neglected in the current plan, but is ripe for improvement. Here are the options SDOT could have offered:

East of 25th Option B

Both of these options would be a vast improvement over the current state of 65th and the city’s current proposals. NE 65th is less steep than NE 68th, and it has lots of destinations. People will continue to bike on it whether SDOT makes it safe or not. We can’t just ignore safety for people biking, and the City shouldn’t even be discussing narrowing sidewalks on 65th. We can do better than what SDOT is currently proposing.

These designs are obviously incomplete, as a full design would include safer intersections, plans for the Ravenna business district (20th to 25th Ave NE), bus stop designs, a design for any loading zone or parking needs in front of Bryant Corner Cafe, a transition to the parallel NE 68th Greenway, and so on. But hopefully they will inspire the project team to be more bold about building 65th for the walking, biking and transit-centric future that we know is rapidly approaching for this corridor.

Be sure to fill out the City’s survey to let them know that their changes to 65th don’t go far enough.