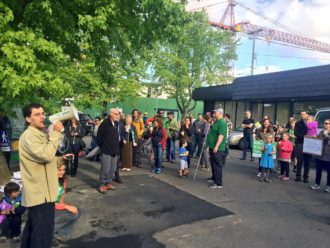 Andres Salomon, now a candidate for mayor, organizes neighbors to protest traffic dangers on NE 65th. The crane in the background marks the site of Roosevelt Station.

After years of community urging and protest, Seattle is about to kick off a road safety project on NE 65th Street to address the street’s serious ongoing safety problems.

People walking, biking and inside cars all continue to get seriously injured and killed on the street, which forms a barrier that splits the neighborhood in two.

Councilmember Rob Johnson joined a June 2016 neighborhood march and protest calling for a safe streets overhaul of the street. He was then able to add the project to the 2017 budget.

After more horrible collisions along the street that left people seriously injured, Johnson and community members behind the #Fix65th effort convinced Mayor Ed Murray to make the project a priority. Though SDOT fell short of Johnson’s call for a design plan to be in place by February 14, the department did have a public meeting and design schedule complete by that date.

The first big meeting about the project will be 6 p.m. February 28 at Roosevelt High School.

The department hopes to have some early safety fixes ready to be installed by Fall 2017, followed by a final design of the street and a more significant changes in 2018-19.

Inga Manskopf, a community member active in the #Fix65th effort, recently wrote a post for the Ravenna-Bryant Community Association blog outlining some cheap and quick fixes the city could make in the near-term. 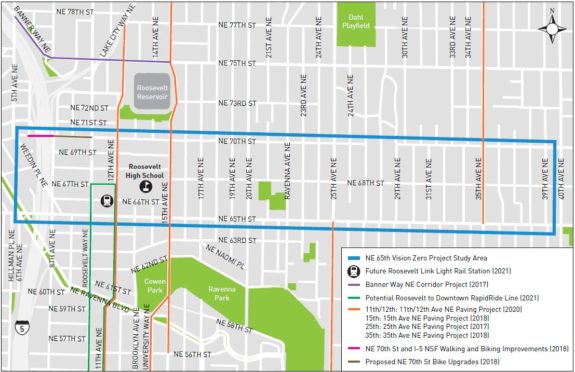 The city’s Bicycle Master Plan calls for protected bike lanes on the street west of 20th Ave, where the bike route would switch to a neighborhood greenway on NE 68th. This was the result of a difficult and sometimes tense community process during the crafting of that plan. The street also passes in front of the under-construction Roosevelt Station, which is scheduled to start light rail service in 2021.

Like so many safer streets projects, this street could be transformed from a dangerous, community-dividing street into a positive asset with more people walking and biking to local businesses or to catch transit. And there is very little trade-off needed to achieve these goals. Most people driving already use the street as one lane in each direction, with the notable exception of people making aggressive passes or swerving around cars waiting to turn or to allow someone to cross the street (a recipe for serious danger).

Traffic volumes on NE 65th Street are significantly lower than the nearby NE 75th Street, which is operating much better for everyone (including people driving) since safety changes were made there. The changes for 65th should be much more bold, with protected bike lanes linking the neighborhood to popular bike routes around Green Lake, on Ravenna Blvd and down Roosevelt. But as always, it will take active and engaged community members to make sure the city takes bold action.