EDITOR’S NOTE: This is Part One of a two-part series by NE Seattle Greenways leader and former mayoral candidate (“I ran for Mayor before it was cool“) Andres Salomon. In this post, Salomon gives an update on the need for NE 65th Street safety improvements. Part Two will cover potential designs that the city could build to make 65th much safer for vulnerable users. 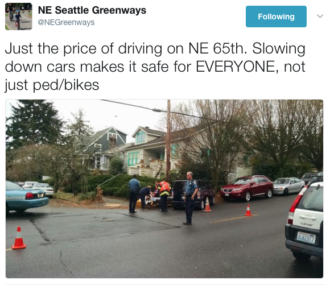 The design of NE 65th St continues to be dangerous in the Roosevelt and Ravenna neighborhoods, resulting in numerous injuries and even deaths. The #Fix65th coalition is a group of concerned neighbors and community groups who have organized to advocate for safety fixes to NE 65th.

At the urging of Councilmember Rob Johnson, Mayor Ed Murray and SDOT finally got to work over the winter to kickstart an effort to fix the street. But the current plan would wait until 2019 to make any real improvements.

We can’t wait another two years for a safe walking and biking environment on 65th.

You have an opportunity to tell the city that we need to take the safety of our most vulnerable road users seriously during an open house 6 – 7:30 p.m. Thursday at Roosevelt High School. SDOT staff will provide updates on their NE 65th safety project and take public feedback. Please attend, and/or fill out the survey (launching tomorrow, stay tuned) to let the city know that you support bold safety improvements to NE 65th.

The history of this process has been both tragic and frustrating. Seattle’s Department of Transportation (SDOT) has never been responsive to requests for safety improvements on 65th, despite years of asking.  When Andy Hulslander was killed biking home from work in 2015, neighbors were told that SDOT was studying improvements. However, not a single change was made to the corridor.

Looks like one of yours could use a reminder @seattledot #Fix65th pic.twitter.com/pMeXsBYhH3

During the 22 months that SDOT gathered data and then decided to do nothing, people continued to be injured and killed along NE 65th:

The dots on this map represent 22 people who were injured or killed in crashes while walking or biking on 65th over a period of three years. Click for the interactive map. 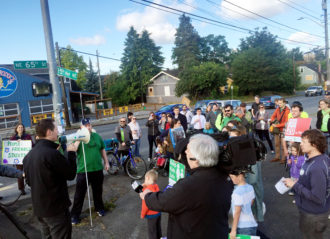 This death toll is shocking.  The City’s lack of action is truly appalling.  The #Fix65th coalition was formed in response to this.  We marched, we organized, politicians got involved, and finally SDOT agreed to make some changes.

SDOT informed the community that fixes would come in two stages, with quick, short-term fixes happening in 2017. Larger, more expensive improvements would happen in 2019. The 2017 changes, which are now complete, were primarily maintenance and some modest safety upgrades: repainting crosswalks, making traffic signals larger, tightening up a turn with some flex posts at 65th and Roosevelt, and changing speed limit signs in the business district to 25 mph.

Though we’re glad to see at least some safety improvements made after two years of waiting, the 2017 work falls far short of what’s needed to prevent two more years of tragedies.  The community asked for temporary curb bulbs, turn lanes, and other improvements to be made, but SDOT says those improvements won’t be happening this year.

This is simply unacceptable.  In the past two years alone, three people have died and two have been critically injured on NE 65th.  This map clearly shows that the section of 65th where the majority of pedestrian and bike crashes are happening is actually quite small.  This stretch of NE 65th urgently needs safety improvements for people walking and biking, and should be a priority for 2017.  At this point, not making safety improvements amounts to negligence on the part of the city.

There’s hope that SDOT can push the longer-term changes forward to 2018, but past experience with SDOT’s many delayed projects makes me pessimistic.  In the meantime, take another look at the above map of fatalities and serious injuries. Those dots represents 22 people who were injured or killed in crashes while walking or biking on 65th over a period of three years.  That doesn’t even include the many additional people who were hurt inside of cars.

It’s time to put an end to this traffic violence.

Andres is a father and active member of NE Seattle Greenways.
View all posts by Andres Salomon →
This entry was posted in news and tagged #Fix65th, andres salomon, ne 65th, ravenna, roosevelt. Bookmark the permalink.