Scenes from our move by bike 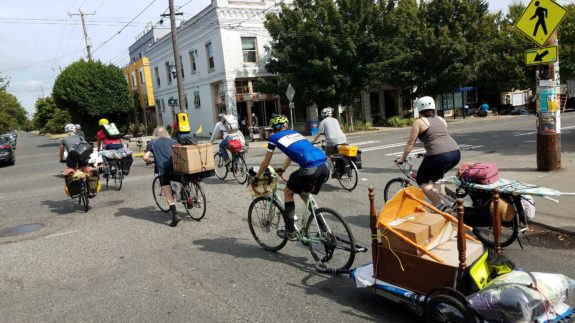 Photos and video in this post by Brock Howell, Editor of Bike Happy and Founder of Bicycle Security Advisors. Thanks, Brock!

A couple weeks ago, my spouse Kelli and I moved from the Central District to the Wallingford/U District area. And with the help of nearly 20 amazing friends — old and new — we did it by bike.

I have moved big items before, like dressers and mattresses for friends or random office stuff for Cascade Bicycle Club. But I had never tried to move my whole house of stuff in a big bike parade. It was a beautiful showcasing of the power of people working together. It was awesome.

Since writing about our plans to move by bike a month ago, I’ve received several questions from people interested in the idea who asked for advice. I don’t know if there is universal advice to give, but here’s what we did.

First off, Kelli and I are very lucky to have an amazing community of people who like to bike. It also helps that we know many people with cargo bikes and trailers, which are vital for your big items. So finding your community is obviously the biggest part, and there’s not any one way to do that. Writing a bike blog and working at a bike organization helps! :-)

In Portland, Shift2Bikes has a great guide for organizing a bike move. The group also helps connect people, and people can advertise their bike moves on the Shift calendar (Shift also runs Portland’s annual Pedalpalooza, so their calendar is a central part of that city’s unique social bike scene).

Seattle Bike Blog has a free events calendar, too. And while it is one good way to help spread the word, it is not quite the incredible social calendar that the Shift calendar is (yet!). So definitely add your bike move to the SBB calendar and email me, but you’re also going to need to do a ton of promoting through other means.

Once you have a bunch of people interested in helping, the preparation process is everything. You have to be totally packed and ready before people arrive. Our goal was to roll out within 45 minutes of the announced start time. But even as prepared as we thought we were, random loading tasks ended up taking more than an hour (thanks for being patient, everyone!). 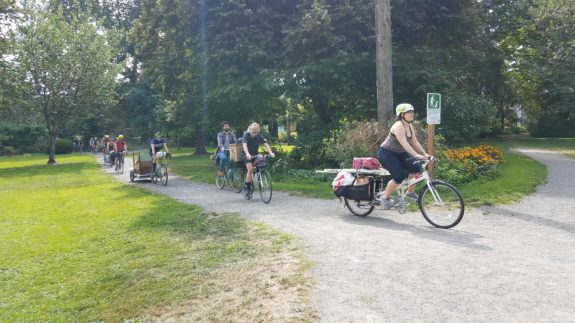 Unlike moving by truck, don’t put everything in big moving boxes. Instead, we had piles of things in backpacks, tote bags and boxes small enough to fit on a standard bike rack. While the cargo bikes and trailers hauling the bed and furniture are often the most eye-catching bikes in the bike move parade, the bulk of the mass of the random things you own is carried by all the people stuffing their regular old panniers, baskets and backpacks with whatever will fit.

Be sure you have lots of bungee cords and compression straps to help people secure their loads. For many people who join, this is likely the most stuff they have ever carried on their bike. So they may need help getting things on. 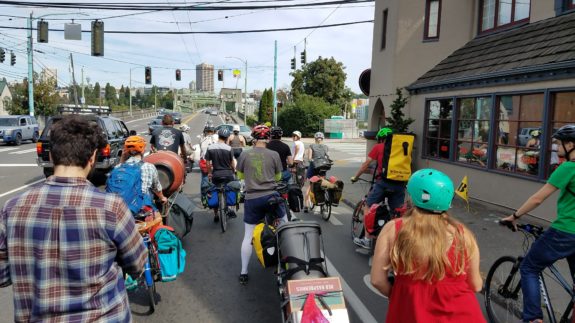 Once you roll out, be sure you have someone designated as a “sweep” who has bike tools and extra straps. And make sure everyone in the ride knows who that person is. Their job it to not leave anyone behind and to help people fix any issues that come up. Inevitably, some riders will need to adjust the load they are carrying or try a different strategy for strapping it all down. The sweep is also important for staying together as a group. You can stop in convenient places and wait until the sweep gets there. Then you know you have anyone and can get rolling again. 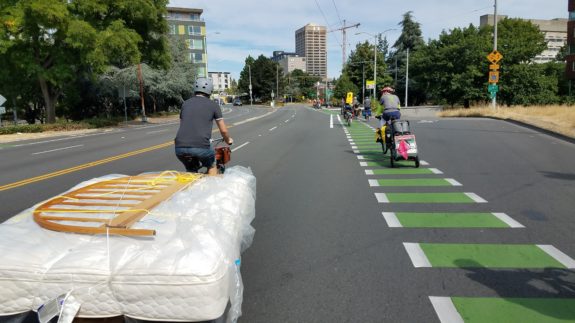 When picking a route, the most important factors are street grades and busy street crossings. In Seattle, these streets are often busy streets you might typically avoid while biking alone. But when you have a big group, including folks hauling furniture, people driving tend to give you more space. 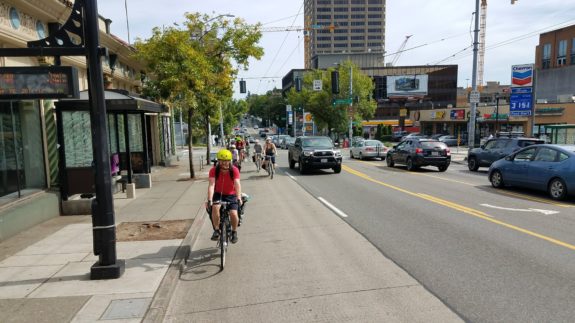 Once you arrive at your new place, it’s time to unload, hang out and tell stories about all the funny looks and comments you got on the way. Providing pizza and beer is traditional.

Huge, huge thanks to everyone who came to help. I owe an extra shout out to Haulin’ Colin of Georgetown’s Cyclefab not just for joining the ride with his amazing custom cargo bike (he hauled our rain barrel!), but also for designing and building such great cargo bike stuff (I used one of his trailers to haul the queen size bed, for example). Cyclefab is an amazing local resource for making your bike do so much more than you thought possible.

But mostly, thanks to everyone for helping to make a normally-tedius task into a super fun bike ride. And for helping to demonstrate how the power of people is so much greater than the power of gasoline. Moving is one of those things many people don’t even dream of doing without cars and trucks. If people can move by bike, think of all the other things you can do by bike. 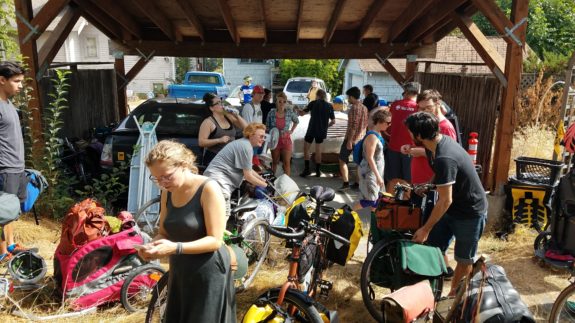 5 Responses to Scenes from our move by bike