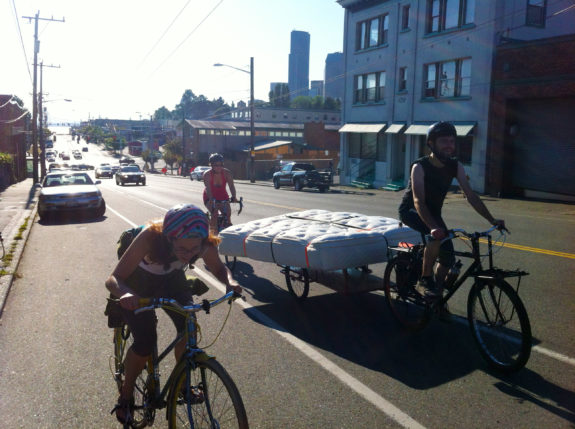 This is how my bed got from White Center to the Central District.

Moving by bike is one of my favorite things to do. It turns a stressful day of trying to cramp stuff into a car or strapping things to the roof into a fun day of riding bikes around town with friends. Many bikes make light work, as they say.

I’ve helped friends (and even Cascade Bicycle Club’s office) move by bike, but I’ve never had a chance to do it myself. By the time I first heard about the idea, my spouse Kelli and I  were already living where we live now. So we have been waiting for this for the better part of a decade.

People with all kinds of bikes are invited! So are your friends. If you have a cargo bike or trailer, that’s obviously very welcome, but even your daily bike with a couple bags or a basket is helpful. Everyone will grab whatever they can carry, then we’ll all ride to our new place together. We’ll have coffee and donuts before the ride, then pizza and beer after.

RSVP via the facebook event it you plan on coming so we can get a rough head count of how many people to expect (you can also get the starting address there). Gather to start loading up 11 a.m. Sunday. We’ll be unloaded and eating pizza in Wallingford in the early afternoon.

The ride will be 4.6 miles from the CD to Wallingford. Most of it will be flat or downhill, but there will be a climb from the University Bridge to 45th St. We will be going pretty slow :-)

If you have any questions, ask them in the comments below. Or you can email me at [email protected].

For inspiration, here’s a video of Cascade Bicycle Club’s office move by bike from 2014:

And here’s a wonderful old report from BikeTV (a precursor to StreetFilms) about a Portland move by bike:

On a personal note, I’m terribly sad to leave the CD after nearly seven years here. This is the longest I’ve lived anywhere since my childhood home in Missouri. Longtime readers may remember that I was also the editor of CDNews (RIP) for a couple years at the start of the decade. But we have a very exciting opportunity to help build a new backyard cottage with friends in Wallingford. Once that project gets going, I am going to tell you all about it. Maybe I’ll even start a new blog about it.

Founder and Editor of Seattle Bike Blog.
View all posts by Tom Fucoloro →
This entry was posted in news and tagged move by bike. Bookmark the permalink.

5 Responses to I’m moving by bike Sunday, and you’re invited