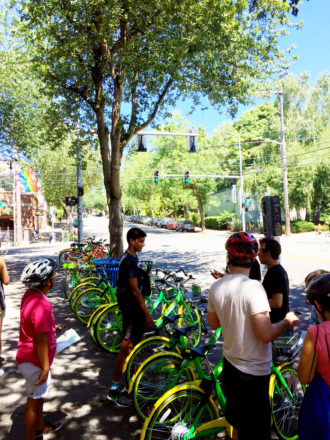 For one day, during LimeBike’s launch party, bikes were packed densely into Fremont. They have since dispersed as people biked them across the city.

No other U.S. city had crafted a permit for private, free-floating bike share before, so Seattle played it safe when writing the pilot permit rules to allow services like Spin and Limebike to operate. And so far, the rules are working very well.

Both companies learned a lot from their initial 500 bike rollout (UPDATE: This is a good argument that new companies should also have a trial period at 500 bikes to work out bugs before going bigger), and now they are increasing to 1,000 each. With a few exceptions (either irresponsible users or vandals, it’s impossible to know), people are parking the bikes very responsibly on the sides of sidewalks and at bike racks as the city rules require. And use of the bikes is through the roof.

But it will be a whole month before the companies can expand again, and with every day their bikes get more and more spread out across the city. This is great because it shows that there is citywide demand for these services. But it’s bad because the more spread out the bikes get, the less reliable it is to find one near you at any given point. The density of bikes is what makes this service really work well, and September 7 feels like forever away.

There’s an easy fix, though: SDOT could speed up the pilot permit timeline. Instead of waiting a month for the next 1,000 bikes, how about two weeks? That would allow companies to have double the bikes on the ground in time for the Labor Day weekend and major summer events like Bumbershoot. As planned currently, the companies couldn’t add any more bikes until the week after the holiday, which seems like a big missed opportunity.

Then the cap could be lifted in early September, a month earlier than originally planned. This would give the companies a month of warmer and sunnier weather to bulk up their systems and get established before the rain comes. Launching in October was one of the big early mistakes for Pronto, since it sapped a lot of the public excitement and attention during those vital early days of operation when the marketing potential was the highest. Seattle shouldn’t force these companies to repeat that mistake.

Alternatively, the city could also just lift the cap before Labor Day, giving companies even more time to get established before the rains come. Because people are more likely to bike through the winter if they are already in the habit of biking regularly.

Cascade Bicycle Club has put out an action alert (using some cool new advocacy campaign software) calling on the city to do exactly this: Let companies add more bikes sooner. You can add your voice using the form below:

In just over one month stationless bike share is transforming how people get around Seattle. To unlock its full potential we need more bikes on the ground.

People have shared what they liked and didn’t like in a brief survey. Overwhelmingly, people said they want more bikes so bike share is more reliable and accessible all over the city.

Trying out this service is probably most attractive during nice weather. Let’s get more bikes on the street in the next two weeks so people can try bike share this summer!

As long as private bike share companies keep following the rules laid by the city, there is no downside to providing people with greater access to bicycles! #WeCantWait