Spin and LimeBike are first to apply for bike share permits, ready to launch once approved

Spin and LimeBike appear to be the two bike share companies most ready to get an early start on the streets of Seattle this summer.

SDOT has confirmed that the companies are the only two who have yet submitted complete applications, though both permits are still under review. The city said it could take a week or two to process permits, which means if the companies have crossed all their Ts they could have bikes in operation any day now.

If both LimeBike and Spin launch with a full 500, Seattle could have bike share services twice as big as Pronto within the next week or so.

Spin released a statement saying the company has 500 bikes ready to go as soon as their permit is approved:

On Monday,  July 3, Spin officially submitted its application to SDOT and pending approval, Spin plans to launch in Seattle as quickly as possible. This means Spinbikes could be on Seattle streets as early as this Friday, July 7 or early next week. So far, Spin has 500 of its orange-colored smartbikes on the ground in Seattle, ready for distribution across the city, as soon as SDOT’s approval comes in. In addition, Spin plans to hire up to 20 people in Seattle, to help manage and maintain Spin’s dockless bikeshare system.

LimeBike is also ready to go “as soon as we have permits in hand,” said Gabriel Scheer, the company’s Director of Stretegic Development. Scheer said they wish they could go even bigger than the city’s pilot permit will allow.

“As for launch numbers, as you likely know the City has been fairly prescriptive in their expectations for launch numbers, and we will of course comply,” he said. “I think the City is wisely taking a thoughtful approach to launch numbers, but wish we were able to launch more broadly from the get-go. Launching with greater scale would enable us to immediately contravene some of the network-related challenges that most hurt Pronto.”

The city’s pilot permit requires that company’s launch with 500 bikes the first month, with the option of expanding to 1,000 bikes the second month, 2,000 bikes the third month and then more than that the fourth month. 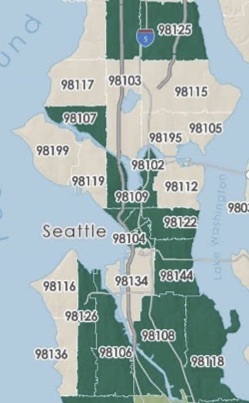 The Tier 1 Priority Hire neighborhoods are highlighted in green.

Once a company reaches 2,000 bikes, they are required to make sure at least 20 percent of their service area covers “Tier 1 Priority Hire neighborhoods.” However, this is a pretty low bar, since many of the central neighborhoods where bike share seems most obvious count as Tier 1. But basically, a company can’t only serve the Burke-Gilman Trail and wealthy Northeast Seattle, Green Lake, Greenwood, Wallingford, Montlake, Madison Park and Alki.

Both Spin and LimeBike have iOS and Android apps available for download. And both companies are offering rides for $1 per 30 minutes.

Both apps also have referral systems in place to encourage you to invite your friends by giving both of you free rides. LimeBike also gives you extra “free” rides if you deposit $20 or more into your account (unused funds are refundable). The upfront, out-of-pocket cost for your first paid ride is going to be more than $1, since you have to put at least $10 in your account at a time.

Smartphones are the only way to access the bikes. To find a bike near you, pull up a company’s app to see a map with all available bikes. Once you get to a bike, scan the QR code on the bike with your phone’s camera to unlock it. Then just ride to where you’re going, find a place to park it and flip the lock. Once locked, you’re done. Just walk away.

The city’s permit application lays out the allowed parking requirements like this (I sure hope the companies are working on a more user-friendly set of instructions): 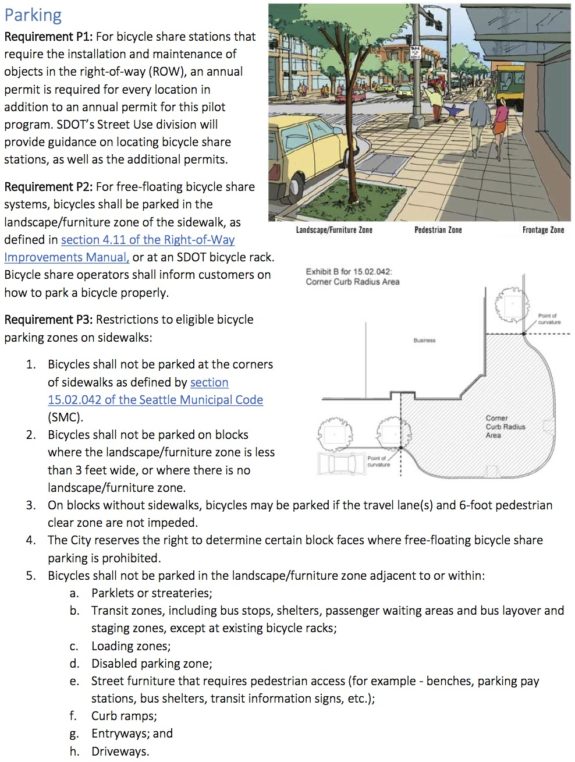 Here’s a video explainer of how it works, from LimeBike:

Founder and Editor of Seattle Bike Blog.
View all posts by Tom Fucoloro →
This entry was posted in news and tagged bike share, limebike, sdot, spin. Bookmark the permalink.

22 Responses to Spin and LimeBike are first to apply for bike share permits, ready to launch once approved