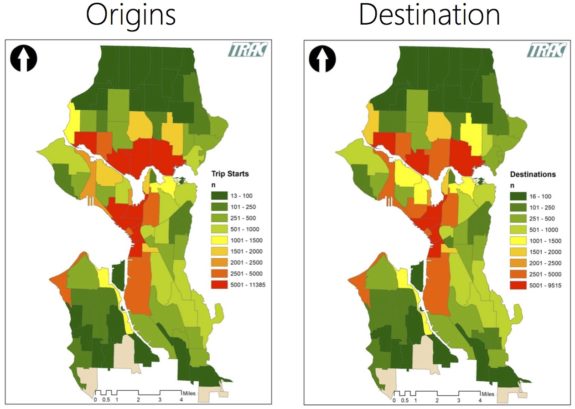 Free-floating bike share is working in Seattle. Or at least it sure appears that way according to the city’s first analysis of anonymized private bike share data.

In just two months, people have already taken 120,000 trips on the bikes. And because companies are steadily increasing the number of bikes on the streets, the number of rides each day continues to grow at a steep rate. 6,000 bikes are currently permitted, but SDOT’s Kyle Rowe told the Committee that he estimates the actual number on the ground now is closer to 4,000 and increasingly daily.

In fact, as bike share companies add bikes to Seattle streets, the number of rides per bike per day has increased, as well. This is a big deal, since the business model for free-floating bike share is essentially dependent on this virtuous cycle in which adding more bikes leads to each bike carrying more trips and making more money.

This is good for Seattle, since it gives companies a clear incentive to keep adding more service to the city. And, of course, it’s a good thing for the companies who need to make money to stay in operation and keep expanding. At what point will adding more bikes fail to further increase ridership? Nobody knows. But we likely have a long way to go before we reach that saturation point.

SDOT officials presented (PDF, video) the City Council’s Transportation and Sustainability Committee with a first look at two months of bike share activity in the city, based on data companies are required to report as a condition of the permit. The data adds LimeBike, Spin and ofo information together to look at the sector in general without exposing individual company operations.

The graphs they showed were astounding. Here’s the growth in rides per day: 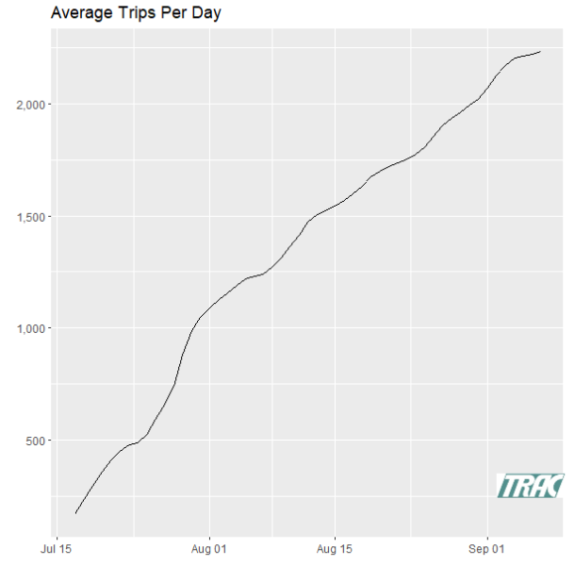 That is a very steep climb.

Here’s the rides per bike per day: 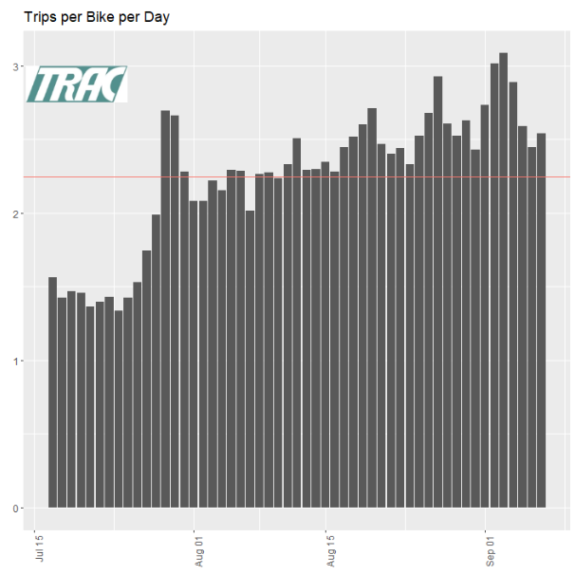 It’s hard to know how these numbers truly compare to other bike share systems because they only represent warm summer months and the number of bikes kept growing throughout the study period. But if the average can stay in the 2.25 range (the red line) over the course of a year, Seattle bike share use will be second in the nation behind only Citibike’s 3.6 rides per bike per day (Capital Bikeshare in DC and Hubway in Boston see about 2.1 rides per bike per day). If the trend continues growing as more and more bikes are added, Seattle could start writing new standards for bike share use in the nation.

Of course, Seattle’s not alone in this free-floating bike share game. Mobike (a China-based bike share giant that rivals ofo), Spin and LimeBike are in the process of launching in Washington DC as I write this. That’s a big deal because, unlike Seattle and Dallas, DC already has a successful station-based system. The whole industry will obviously be watching what happens there closely.

There are still many tests ahead for Seattle’s bike share services. The rains have arrived big time in recent days, and you would expect bike use to dip through the winter. Bike maintenance needs will also likely increase in wet weather (especially if the city ends up salting roads due to freezing weather). But the cap on bike numbers is set to lift October 7, so companies could start adding bikes at whatever rate they see fit. There could be forces pulling bike use in both directions.

The cool thing about these bike share services is that you don’t have to bike in heavy rain if you don’t want to. Let’s say you take the bus to work because it is raining, but weather clears up by the time you are off work. Bike share is waiting there for you. I bet we’ll start seeing a lot of mixed travel based on weather conditions. That’s why having many transportation options is so great.

In a city where traffic only gets worse, bike share is taking real and immediate action to do something about it. And it appears to be working. 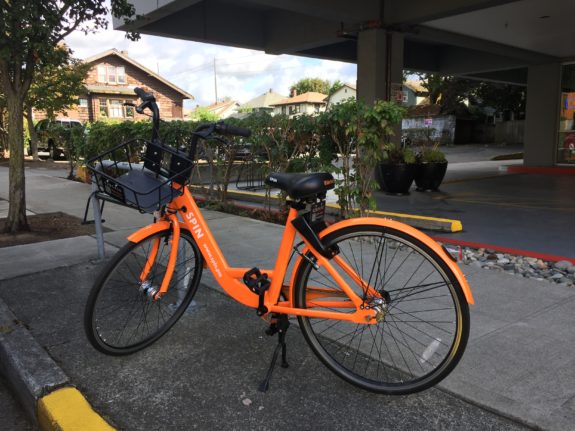 Until now, LimeBike’s very low gearing and general sturdiness gave that company’s bikes an advantage over Spin when climbing Seattle’s hills. But that may have changed in the past week or so, because Spin has launched a new and vastly-improved bike. It is lighter, has a lower low gear, a better shifter, stronger brakes, a better kickstand, a locked seat post that does not swivel and is harder to steal, and a much better headlight.

In fact, the new Spin bike passed an informal test I have used to gauge each company’s bikes: I was able to climb up Pine Street from downtown to Cal Anderson Park without standing up to pedal. Before now, only LimeBike had passed this test.

Right now, Spin’s fleet is a mix of the old and new bikes, but the company is gradually phasing these bikes into the Seattle market. The easiest way to tell if it’s the new bike is that the kickstand is a double-stand style and the front basket moves with the handlebars instead of being attached to the frame. Give it a try and let us know what you think in the comments below.

This goal is in line with something SDOT Transit and Mobility Director Andrew Glass Hastings said during the Council briefing: “Transportation remains the second overall household cost” in Seattle. And while SDOT can’t do a whole lot about rent and mortgage payments, “we can directly lower the cost of transportation.” And $1 bike share is part of that effort.

The use map at the top of this post shows solid use in Rainier Valley, which is impressive considering the lack of consistent and connected bike lanes there. Just imagine what use would look like if there were bike lanes on Rainier Ave.

LimeBike recently closed a second round of investment funding in the “tens of millions,” Forbes reports citing “one source familiar with the deal.” The latest round values the nine-month-old company around $200 million, the Forbes report adds.

Firms involved declined to comment publicly on these figures, but if it’s true, that could put LimeBike in a position to compete with China-based companies like Mobike and ofo that have hundreds of millions in funding on hand, valuations in the $2 billion range and business growth strategies of global proportions.

Grace Lin, VP of ofo U.S., told Seattle Bike Blog that her company’s goal is “to unlock every corner of the world, and to make bicycles accessible to anyone, anytime, anywhere.”

This free-floating bike share thing is just getting started.