ofo launches in Seattle, but their goal is ‘unlocking every corner of the world’ 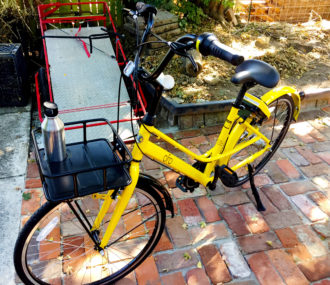 In story after story about ofo, writers trained to capitalize company names write “Ofo.” But there’s a reason to type the name in all lowercase letters: The typography looks a bit like someone riding a bike. ofo

This is part of the $2 billion company’s global strategy, a name that transcends language much like the humble bicycles they hope to offer the whole world.

“Our founders from the beginning thought that the bicycle is a global language,” said VP of ofo U.S. Grace Lin, “that bicycles can be a link to connect people and a way for people to live more healthily and extend their reach.”

And the Beijing-based company’s stated goal is enormous: “To unlock every corner of the world, and to make bicycles accessible to anyone, anytime, anywhere,” said Lin.

And though that sounds like a lot of bluster, ofo already has more than 8 million bicycles in operation, mostly in China, and claims to serve more than 25 million daily rides.

To top that off, ofo received $700 million in venture capital last month with its eyes set on global expansion. And Seattle is their first city in the United States. By the end of the year, the company hopes to be in more than ten U.S. cities.

“In a few months or in a year” Lin said she hopes many people across North America “will make bike share a part of their transportation options.”

So far, there are a few hundred ofo bikes on Seattle streets, and the company is rolling more out gradually and consistently. Maintenance staff will scale up as the number of bikes increases. Their permit allows up to 1,000 bikes now, increasing to 2,000 September 7.

But though the company is getting started about a month later the Spin and LimeBike, its huge amount of investment capital puts the company in a potentially strong position for next phase of Seattle’s bike share experiment that is scheduled to start October 7. That’s when the caps on bike share numbers will be lifted, and the search for the city’s saturation point begins.

But though ofo is quite comfortable launching tens of thousands of bikes in a city, they are treading more patiently in Seattle.

In the grand vision, however, Lin said she could see the Seattle region handling as many as 20,000 bikes or more. But the company is not looking to bring too many bikes too quickly. 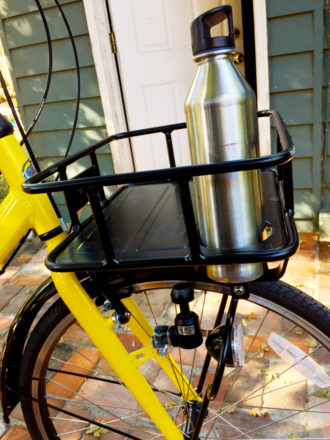 And ofo is already learning some lessons about their bikes. They have heard a lot of feedback about their baskets being too shallow, so they are planning to upgrade them. And the cup holder in the basket is of questionable utility (my water bottle, which fits well in both a car cupholders and bicycle bottle cages, tipped over immediately in the ofo basket).

And though the company launched with three-speed bikes instead of their standard single-speed bikes, the lowest gear is not low enough to allow riders to sit down while pedaling up hills like Pine Street from downtown to Capitol Hill. LimeBike remains the best option for hill climbing.

Lin said the company may try out some single speed bikes in Seattle to see how people like them. Many users prefer the simplicity of a single-speed bike, she said.

I asked Lin if the company operates in any other hilly cities, and she pointed to Chongqing, China.

“We have a lot of experience operating in cities that are hilly,” said Lin. And though “some bikes aggregated at the bottom of the hill,” she said, “staff collect them and put them in the right place.”

The ofo bikes in Seattle feel well-designed for taller people, with very high handlebars that make it feel almost like riding a chopper if you are a shorter person. I imagine there are some people who will love that style, and some who won’t. 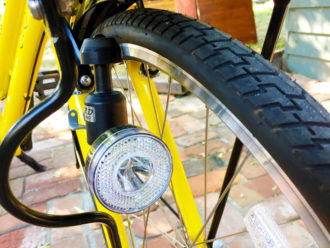 One of the biggest differences about the bike is the front headlight, which does not turn on automatically. ofo lights are powered by a bottle dynamo, so it only turns on if you flip a metal lever that moves the generator so it makes contact with the rim of the front wheel. As the wheel turns, it spins the generator and powers the headlight.

This style of generator light is common in many parts of the world, but not so much in the US these days. There may be a bit of a learning curve for people using them for the first time during dark conditions, but it works. There is a bit more drag when using the ofo headlight compared to the hub dynamos more common in the US, the style both Spin and LimeBike use. So I imagine most ofo users who are familiar with the headlights will disengage them during the daytime.

The locks on the ofo bikes also feature a keypad, though the mobile app is currently the only was to access the bikes. But the keypad could signal plans for other ways to purchase rides. Spin and LimeBike both recently announced ways for people who don’t have smart phones, data plans or credit/debit cards to access their bikes. Perhaps ofo’s keypad will help them break down those barriers, too.

ofo rides also cost $1, but unlike Spin and LimeBike’s 30 minutes, your ofo dollar gets you an hour. Most trips on Spin and LimeBike are around 16 or 17 minutes, so perhaps the hour isn’t such a big deal. But it’s a bit of pricing competition for a service that is already very affordable to access.

Have you tried an ofo bike yet? How did it go?

22 Responses to ofo launches in Seattle, but their goal is ‘unlocking every corner of the world’