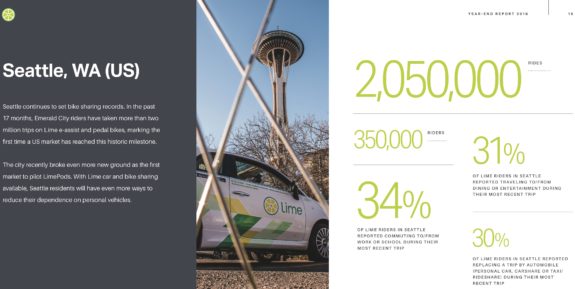 People in Seattle have taken more than 2,050,000 trips on Lime bikes since the company launched in summer 2017, according their annual report. That’s a pace of about 1.5 million trips per year for just one of the companies serving the city with shared bikes.

There are few precedents for an urban mobility service that has so quickly served so many trips. Transit services often take years or decades to plan and launch. So especially for a city that is facing a very near-term traffic crunch, a non-car service that can carry so many trips is a huge deal.

And we still have not seen the city’s bike share permit reach its true ambition. Motivate/Lyft is supposed to join Lime and JUMP/Uber, combining to reach as many as 20,000 bikes. And as other cities have shown, adding shared electric scooters to the mix could carry even more trips than the bikes. The city has so far been resistant to adding scooters. Ensuring and demonstrating that the devices will be safe on steep hills will be vital for companies trying to ease concerns at City Hall.

Meanwhile, Lime has expanded into car share with the launch of Lime Pods in Seattle. While this blog does not typically cheer on car services, I actually like car share. As someone who grew up in a car-depended suburb in Missouri, I know how scary it can be to make the leap and sell your car. When you’re used to having it, it’s hard to imagine life without it. Well, car share services can work like Nicotine gum. Knowing you have a car around if you really need it can make selling your car a bit easier.

Seriously, I cannot recommend selling your car highly enough. I have rarely ever felt such a sense of relief and personal freedom as I did watching the new owner drive that 1995 Nissan Maxima away. And you get a fat stack of cash.

The more people use car share, the less reason there is to build and reserve space for car parking.

ofo appears on the verge of collapse

Remember when ofo abruptly pulled out of the United States? Many wondered if their departure was related to Seattle’s big increase in permit fees, but others speculated that the sudden departure was a sign of trouble back in China where the bulk of their business is.

Well, the enormous bike share company appears to be on the verge of collapse as their user base rushes to get their deposits back. ofo is the biggest bike share company in the world, so their demise could be the most dramatic example of China’s bike share bubble bursting. It might seem like there are a lot of bike share bikes on the streets in Seattle, but the recent boom in bike share in China is on a massively larger scale. Seattle counts bikes by the thousand. ofo has launched millions of bikes. When I interviewed an ofo spokesperson back in early 2017, they said the company’s goal was to “unlock every corner of the world.”

Some day, I bet ofo will have a paragraph or two in a lot of economics text books.

This entry was posted in news and tagged bike share, limebike, ofo. Bookmark the permalink.