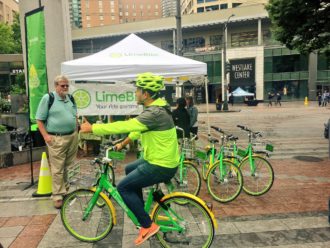 In fact, it’s possible that at this point the companies are helping each other by educating the public about the concept of free-floating bike share services. Someone who learns about how LimeBike works from one of the company’s promo events, for example, will also know how Spin works and vice versa. And having double the bikes on the street means bike share as a transportation mode is more convenient for more people for more trips, which is good for both companies.

But, of course, they are definitely competing hard.

LimeBike has had a couple bikes floating around since the city approved their permit July 17, but was not as quick on the draw as Spin, which rolled out its 500 bikes as soon as they had a permit in their hand. LimeBike started rolling out their 500 bikes Tuesday and launched with an official unlocking ceremony Thursday.

But the 2,000 rides in two days is notably double the number that Spin reported July 19, though it is much too early to determine which company will outpace the other. This whole free-floating bike share thing is just getting started.

It’s been just over two days since we deployed 500 bikes on Seattle’s streets, and we’d like to share some exciting data:

Monthly passes will be $30

Both LimeBike and Spin are preparing monthly passes for heavy users, though neither plan is available for purchase yet. LimeBike will call their service LimePrime, and will offer 100 30-minute rides a month for about $30.

Spin recently announced a plan called Spin Unlimited that, as the name suggests, offers unlimited 30-minute rides for about $30 a month.

That’s about 30 percent of the cost of a bus pass.

It’s hard to say how good a deal these passes will be. Someone who takes two rides a day five times a week would rack up $40 in a month if they pay as they go. But buying a pass means you are dedicating yourself to one company, which cuts at least in half the number of bikes available to you.

But if you’re a very heavy user who takes 60 or more trips per month, then perhaps it make sense to just buy both passes.

There is also added value in having an all-you-can-bike plan (100 a month with LimePrime is basically unlimited). For example, you will likely take trips so short you wouldn’t pay even $1 for it. I used to do this all the time with Pronto. Biking four blocks is still faster than walking four blocks, but I wouldn’t pay $1 for such a short trip.

Many people with bus passes do this, too. If the right bus just happens to come along, you can hop on for a short trip you would never pay $2.50/$2.75 to take.

Monthly pass pricing is yet another space for competition and innovation in this new free-floating bike share business. But don’t expect any Pronto-like deals. Their $85 annual pass was a ridiculously good deal. SDOT Director Scott Kubly once joked that if you biked a lot, you might save that much money in reduced wear on your shoes. But, of course, the Pronto business model proved to be flawed. The annual pass deal was supposed to be subsidized by people buying the much higher-rate $8 day passes, but that didn’t happen.

Spin and LimeBike offer a much lower point of entry to ride, but heavy users will likely spend much more annually compared to Pronto. 12 months at $30/month is $360, still a damn good deal for a year of transportation. But users of the new systems are also getting a much wider service area and — if the companies expand as planned and keep their bikes well-maintained — a much better level of service.

25 Responses to LimeBike gets 2,000 rides in two days + Both companies announce $30 monthly plans