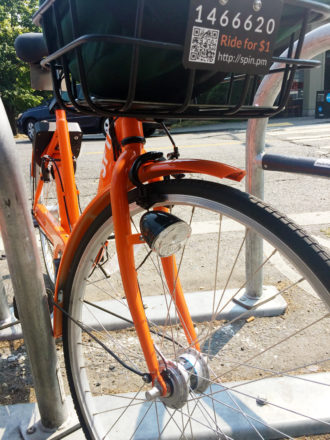 This Spin bike has an upgraded headlight. The company is rolling out improved bikes with better headlights and lower gears.

LimeBike says its first 500 bikes saw “about 10,000 rides” in their first week of action. When added to Spin’s total the same week, Seattle’s 1,000 bike share bikes likely quadrupled Pronto’s best week ever and surpassed even Portland’s Biketown in its first week of operations in July 2016 with the same number of bikes.

This is a big deal because Portland has significantly higher biking rates, many more miles of connected bike infrastructure and is much less hilly than Seattle. So if the same number of bikes is doing the same or better here compared to there, that’s eye-opening.

Spin declined to give us a ride count for the same week, but CEO Derrick Ko said that combined with LimeBike’s reported total, the two companies “significantly bested” Biketown’s opening week ride count of 13,402.

The days of comparing these new bike share systems to Pronto are already over. We’re in all-new territory for West Coast bike share. Because unlike Biketown, the bike share companies in Seattle are not stopping at 1,000. Starting Monday, Spin and LimeBike started rolling out their next 500 bikes each. Both companies say they are adding bikes gradually all week, so Seattle’s bike share total should be up to 2,000 in a couple days.

Two more companies, VBikes and ofo, have also submitted permits to operate in Seattle and could add 1,000 each if approved. And in one month, companies will be able to increase their bike counts to 2,000 each. Then in October, caps will be lifted. That’s really the start of stage two for this new private bike share experiment in Seattle: The search for the magic number of bikes needed to best serve our city (and, of course, win riders and make money).

ofo in particular has an enormous amount of investment capital behind it, having raised $700 million just last month. They claim that riders have taken two billion (like, with a “b”) rides on their 2.5 million bikes in operation, mostly in cities in Asia. They also have my favorite bike share company name because if you type ofo lowercase, the letters look a bit like someone on a bike. Cute!

We have reached out to ofo several times in recent months, but have not yet been in touch with anyone who can speak to the company’s vision for operating in Seattle. But theoretically, there is not much a of ceiling for how many bikes a company with that level of investment could bring.

Perhaps you are sitting there scratching your head because none of this makes any sense. How could there be enough money in renting $1 bikes to justify all this investment? You’re not alone.

As people living in an U.S. city, we just can’t imagine the number of bike rides these companies believe they can facilitate. No U.S. city has biking rates that high.

Well, suspend your disbelief for a moment with me. 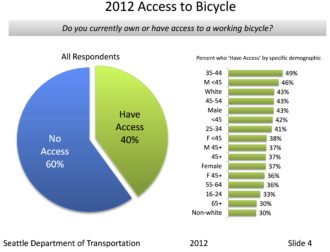 A 2012 survey of Seattle adults found that the single biggest barrier to biking is not hills or weather or even the city’s lack of bike lanes. It’s much more simple: Access to a working bicycle. Only 40 percent of Seattle residents said they had access to a bike that works, and bike share solves that problem (at least for people with a debit/credit card and a smart phone).

Add to this the fact that 40 percent of trips in the U.S. are fewer than two miles. Half are fewer than three miles. That is an enormous number of trips within a 20-minute bike ride (both Spin and LimeBike have said that average trips are about 17 minutes or so).

And our current transportation options to fill such relatively short distances are often quite awful. Driving a personal car is expensive and frustrating, and makes little sense for most trips under a couple miles. Local buses don’t really go from point A to point B for many people’s trips, and many local buses run infrequently compared to express routes. TNC services like Uber and Lyft and car-sahring services like Car2Go and ReachNow have exploded in recent years in large part to serve these shorter connections, and their successes are based on being the most convenient option for people who can afford it.

Well, now imagine a Seattle where you can depend on finding a $1 bike share bike within a block or two of wherever you are at all times. There’s no surge pricing, it’s available on-demand 24/7, and it’s fun. If bike share becomes the cheapest and most convenient option for half of people’s trips, the potential ride volume is enormous. The ride volume is still enormous even if they only capture a relatively small percentage of these trips.

In other words, these companies are betting on a bicycle transportation revolution in Seattle. If they succeed, we could see a reduction in vehicle miles traveled, which has ramifications both for traffic and for the city’s total emissions. There will be many naysayers, of course, and nobody can say for sure if the companies can get there. But if they succeed, that would be an enormous benefit to our city. Right now, they are the only services working in the immediate term to do anything to improve our city’s transportation options. Subways are years and decades away, and more TNCs just means more traffic. These bikes are hitting our streets as I type these words.

The biggest barrier to success for these companies is Seattle’s lack of comfortable and connected bike infrastructure. The good news is that the companies are basically supplying a user base for any new bike investments the city makes. So the sooner the city can get them open, the sooner they can be put to use moving people around town.  The bad news is that the city’s bike network continues to move at a glacial pace, especially compared to these new bike share services. The staff at SDOT working on bike network projects are working hard, but adding a couple connections here or there each year just isn’t going to get us where we need to be fast enough. Like these bike share companies, SDOT needs to scale up its bike network efforts if the department wants a lot more people to be able to rely on bikes to get around.

This entry was posted in news and tagged bike share, limebike, spin. Bookmark the permalink.