Cascade: Redmond stations are a chance to go all out on Sound Transit station access

Transit works better when people can get to the stations. 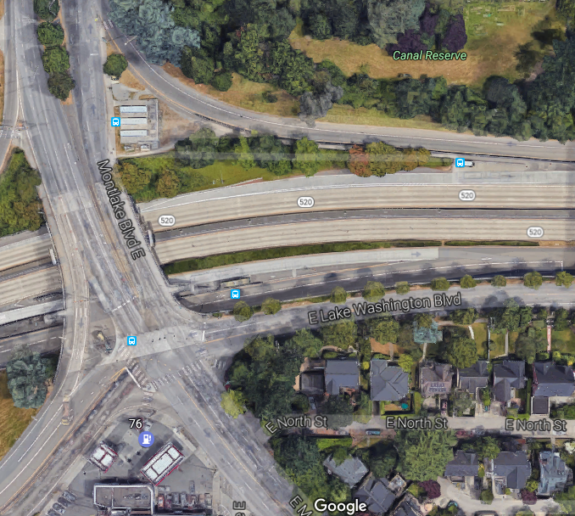 It’s incredible how many people navigate 520 freeway hell every day to use these vital express bus stops in Montlake. Image from Google Maps.

And it’s a lot harder to go back and fix station access problems once the core issues have been baked into the planning process.

Specifically, Cascade is pushing for these station options:

Cascade supports an at-grade station at SE Redmond, and an elevated station at Downtown Redmond. This configuration promotes safety by minimizing at-grade road crossings, is the most cost effective alignment, and will enable King County to build a trail connection from the East Lake Sammamish Trail to the Redmond Central Connector, during construction of light rail.

This early process will guide high-level decisions about rail alignment and station locations. Making the right choices now to prioritize biking and walking access is far better than trying to tack on biking and walking improvements later.

Last November, voters approved the Puget Sound region’s biggest ever investment in new public transit. With the plan approved, the real work starts here. The first ST3 (see below for a refresh on ST3) projects will be baked during 2017. First up is Redmond and the opportunity to set the destiny of the system expansion.

IT’S NOT ROCKET SCIENCE: IF GETTING TO LIGHT RAIL IS EASY, COMFORTABLE AND SAFE, PEOPLE USE IT.

We’re working towards a future where light rail is fully integrated into local communities, people can easily walk, bike or hop off the bus and jaunt up to a station. In an alternative future, which would miss the mark, stands a cold, isolated train station, set away from communities and surrounded by thousands of cars, both parked and crawling by on congested roads. The few people walking to a station have a daily 10-minute slog across a parking lot, and they dread it every day. Ensuring we achieve the vision we want hinges on engaging today and speaking up for what makes light rail easy to use for people who walk and bike.

In Redmond, the design for two new stations could include a new off street trail to connect people between south and central Redmond, long separated by the SR-520 highway. One design option would connect the East Lake Sammamish Trail to the Redmond Central Connector segment of the Eastside Rail Corridor. The other option would make the trail connection cost prohibitive. That’s not acceptable: it’s critical to have an intuitive bike connection from Issaquah and Sammamish to jobs, and commerce in Redmond and Kirkland.

A MODEL FOR THE ENTIRE REGION

Just like in Redmond, there will be chances to create new safe places to walk and bike as communities make way for light rail stations and lines. We’re urging Sound Transit to work with local public agencies and communities from the beginning of station area planning so that this huge regional transit investment works for everyone. Sound Transit’s funding pot for making sure this happens is the System Access Fund. With approximately $370 million for the entire 20 year roll out, every dollar matters. These funds will pay for things like sidewalks and bike lanes, secure bike parking and ADA accessible pickup and dropoff areas. As ST3 projects roll out, we’re working to protect those funds and make sure that the light rail system expansion creates communities all through Puget Sound where people can walk, bike, and hop on the bus to get to light rail, and the places we need to go.

9 Responses to Cascade: Redmond stations are a chance to go all out on Sound Transit station access