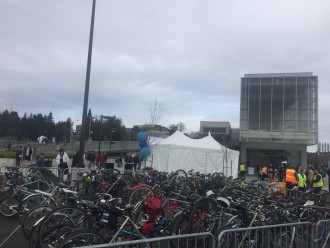 Way cheaper and more efficient than a parking garage

Sound Transit’s latest ballot measure draft would spend $661 million in transit funds to build car parking near stations. Seattle Transit Blog did the math and found that each new parking space would cost $80,000. To put that in perspective, a person could park their car at a station every day for 50 years and Sound Transit would pay them $4.38 per day to do it. That’s basically the cost of their round-trip fare.

The budget for new car parking at stations is double the budget for biking and walking access improvements to those same stations.

And not only will these biking and walking projects help people get to light rail safely and easily, they will also make the neighborhoods around the stations better places to be. Sound Transit can pay for the stations access and get the improved livability for free.

Cascade Bicycle Club has an action alert out calling on Sound Transit to increase the biking and walking access funds to $500 million. One way to fund this increase: Simply charge for parking at stations. This would have the added benefits of incentivizing people to get to stations by another means if possible and charging people more of their fair share.

Sound Transit already charges for secure bike parking, and bike parking costs a minuscule fraction of that $80,000 per car space.

This seems like a very reasonable change to the package that would also give the campaign to pass the ballot measure another big benefit to sell to voters who live near any of the proposed stations.

Here’s the text of the letter. You can send it or a modified version yourself using Cascade’s handy form:

Thank you for the opportunity to comment on the Sound Transit 3 Draft Plan. I urge the Sound Transit Board to increase investments in biking and walking (non-motorized system access) so that I can safely, affordably, and easily get to transit.

In the final Sound Transit 3 package, I would like to see the total walking and biking investments increased to $500 million dollars. This is possible by:

•Increasing R-05 (System Access Fund) to improve biking and walking to more transit stations, whether existing or to be completed in the future.
•Increasing non-motorized access allowances in individual projects.
•Making parking more efficient by pricing  parking and using a portion of the revenues to fund improvements for biking and walking around the station area.

Increasing biking and walking investments helps Sound Transit 3 get more people moving. The success of transit can often be limited by making it hard to bike and walk to a bus stop or light rail station.  It supports Transit Oriented Development and affordable housing around stations — It supports healthy, equitable communities — And, it provides low-cost, sustainable ways to give more people better options to get around the Puget Sound.

Founder and Editor of Seattle Bike Blog.
View all posts by Tom Fucoloro →
This entry was posted in news and tagged cascade bicycle club, sound transit, st3. Bookmark the permalink.