Despite more than a decade of bicycle activism, Ballard Bridge remains a danger

EDITOR’S NOTE: This story is by Taylor McAvoy through our partnership with UW’s Community News Lab journalism course. 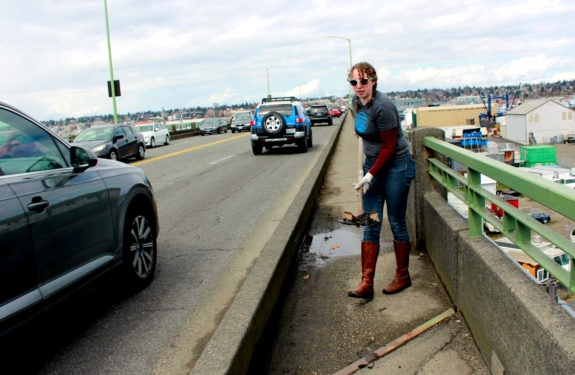 Haley Keller has adopted the Ballard Bridge sidewalks. She holds cleaning parties for the bridge every two to three months. Photo: Taylor McAvoy

Riding home at night a few years ago, Haley Keller had to cross the Ballard Bridge with its notoriously skinny three-foot-wide sidewalks. She usually carries only one bag on the left side of her bike rack to avoid the occasional concrete pillars that protrude into the sidewalk on that section of the bridge. That night she carried two, one on each side.

“I don’t know exactly what it was,” she said. “Whether it was a gust of a wind or a car had come by that had pushed me a little bit but I went over and my bike bag hit the side wall.”

Catching on the wall, Keller’s bag threw her off balance and over a ten-inch-high curb, into the oncoming traffic lane.

“I was able to pick myself up and get off the bridge quickly,” She said. “But if it had been in the middle of traffic on a busy day, I don’t know what would have happened.”

Terry McMacken was biking on the bridge in July 2007 when something similar happened. He fell over the curb, too, but someone driving struck him. He died in November 2008 from complications from the injuries he sustained.

McMacken and his wife filed a lawsuit against the City of Seattle in July 2008. His estate settled with the City a year after his death.

“The fixes are very simple,” attorney Jack Connelly told the Seattle P.I. in 2008. “The concern that we have is that there were people telling the city about this problem well before this incident.”

But the city of Seattle has noticed and is taking steps to improve bicycle safety.

Seattle launched Vision Zero in 2015 as a goal to end serious injuries and deaths in Seattle’s streets by 2030. As a 2016 campaign for the project, volunteers for Seattle Neighborhood Greenways and Cascade Bicycle Club placed white silhouettes around the city representing the people who died in traffic over the previous ten years.

“You hear about an accident or a collision and you have to realize there are real people affected by that,” Connect Ballard activist Sean Cryan said. “And the number of those things that were around the city just from ten years was really startling, that that many people have died on the roadways. I think that is something to keep in mind as all of this moves forward. Really the goal is to not have any more white silhouettes out on the streets.”

The Bicycle community has been battling the City of Seattle since 2006 when voters passed the nine-year Bridging the Gap Levy with $365 million for transportation projects. It promised maintenance and improvements to city bridges including the Ballard Bridge. A seismic retrofit was completed in 2014 using the funds from the Bridging the Gap Levy, but nothing has been done to widen the bridge’s sidewalks, install a railing or design the merges on and off the bridge to be safer for people biking.

The Move Seattle Levy passed in November 2015 promising $930 million for transportation projects over a span of nine years, almost triple the size of the 2006 levy it replaced.

But the issue with funding the Ballard Bridge, Kubly said, was more about making sure other projects in the city have enough funding.

“It’s all about balancing and prioritizing,” Kubly said. “It wouldn’t be an effective use of resources for us to take the lion’s share of our money and put it in a single project. We need to make safety improvements across the city.”

SDOT Senior Civil Engineer Jason Fialkoff said there is a study planned to evaluate funding strategies for the more expensive improvements to the bridge, but he doesn’t know if it’s started yet. There’s no word on whether that study will consider widening the bridge sidewalks.

“While the Ballard Bridge is constrained it doesn’t have the same crash history as some other areas,” Kubly said.

But Cryan said that’s because of the danger of the bridge itself.

“On the Ballard Bridge it is somewhat self-selecting because it is so dangerous,” Cryan said. “There are fewer people on it than there might be because people only go across because they’re feeling really secure about it.”

Keller became a Board Member at Cascade in 2015. She participated in a ten-week advocacy leadership program, and part of her advocacy training required her to focus on a specific project. She chose the Ballard Bridge.

In February 2015 Keller drafted an open letter to Mayor Ed Murray, Seattle City Council and SDOT in a video about the Ballard Bridge’s importance as a crossing point and its danger to people on bikes.

She also created a video in May 2015 outlining multiple ways to widen the sidewalk, install higher railings and make the on- and off-ramps safer with crosswalks and bike lanes. In it she cited a 2014 Berger ABAM study of options for widening the Ballard Bridge’s sidewalks SDOT had commissioned.

She even explained how the city can pay for the changes by removing an unnecessary overpass on the south end of the bridge and selling a parcel of land the overpass now inhabits. That funding would be in addition to the $930 million from the Move Seattle Levy.

Keller, along with other bicycle advocates, held a meeting with SDOT director Scott Kubly in March 2015 to share concerns and suggest improvements. Keller said the main issue was that SDOT thought widening the bridge was not feasible for the city at the time.

The conversation continued when Cryan put together a presentation for a meeting with SDOT and presented it the Seattle Bike Advisory Board and Seattle Neighborhood Greenways.

Haley and her husband Dave Keller worked with Cryan and members of the Seattle Bicycle Advisory Board (“Bike Board”) and Cascade to create a document of suggested improvements for the Ballard Bridge.

“We felt like the ball had started rolling about what improvements could be done,” Haley said. “We were optimistic to some regard that something would actually be done in the short term afterward.”

Co-chair of the Bike Board Steve Kennedy said nothing significant has been done on the Ballard Bridge for a few years.

“It’s kind of the way things have gone,” he said, “which is there’s a lot of talk and little or no action.”

In April last year SDOT asked freight, walking, and biking representatives about how they could improve the bridge and came up with a list of recommendations. It lists “improve sidewalk pavement condition” as “in progress,” but says nothing specifically about widening the bridge sidewalks. Installing a railing is in the “early planning” stage, and adding bike lanes to exits is in the “evaluating feasibility” stage.

SDOT plans to add crosswalks and median islands on the north side of the bridge to make crossing easier and provide improvements to the Rapid Ride transit system this year. The city also plans to connect the nearby Ship Canal Trail to the Elliott Bay Trail.

The railing planned for the bridge in 2015 was deferred from a short term project to a medium term project, Fialkoff said. He didn’t offer a completion timeline.

The city might be hesitant to put money into the Ballard Bridge because it only has ten to 20 years of life left, according to Kennedy.

Kennedy is now working with Fialkoff and Councilmember Mike O’Brien to plan a meeting about the bridge in late May. No specific date or agenda is set.

In the meantime, Peddler Brewing has officially adopted the Ballard Bridge sidewalk and holds cleaning parties every two or three months. They have already completed three sidewalk cleanings this year.

“I thought about what’s the best thing I can really do, and it’s just to keep it as safe as I can for people right now,” she said. “Nobody else is going to clean the sidewalk, so we’ll keep doing that to keep it safe. It takes patience to get anything done in Seattle, but we’re hopeful.”

35 Responses to Despite more than a decade of bicycle activism, Ballard Bridge remains a danger