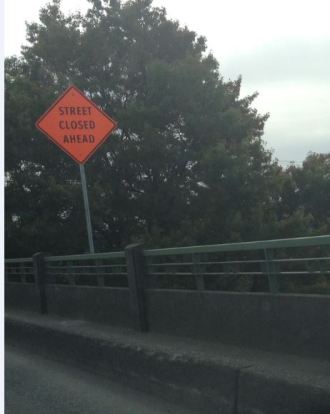 Biking over the Ballard Bridge can be a stressful and squished experience. The sidewalks are far too skinny to squeeze by others as it is. So when road crews installed a sign warning drivers of changes dues to the W Emerson Overpass Repair Project in such a way that it blocked part of the already-too-skinny sidewalk, several of you emailed me and the city to voice your frustration.

Auden Kaehler put it this way:

As one of many cyclists who depend on the Ballard Bridge to commute to/from work I, and my fellow cyclists, were shocked yesterday morning to see city workers installing traffic detour posts on the West side approach sidewalk, which is already unacceptably narrow.

The city listened to Kaehler and moved the sign to get it out of the way of the sidewalk. City Traffic Engineer then sent the photo above to Kaehler and Seattle Bike Blog. Road workers placing signs in bike lanes and sidewalks is a pervasive issue, but it’s great to see the city respond so quickly.

In other Ballard Bridge news, KIRO 7 followed up on the city’s recent Ballard Bridge sidewalk widening study recently by asking Haley Woods from nearby Peddler Brewing to explain the problem (see our report here). She did a great job.