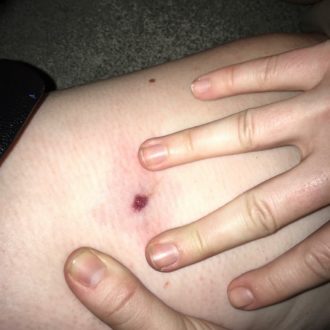 Image from Keller. The pellet hit her in the thigh.

Some terrible person shot Haley Keller with a pellet gun Monday night while she and her husband Dave were biking home from watching the sunset at Golden Gardens.

Keller, a Connect Ballard advocate, Board Member of Cascade Bicycle Club and Washington Bikes, and co-founder of Pedder Brewing, said the pellet hit her in the thigh, leaving a nasty welt that is turning into a bad bruise. The experience shook her up, but she’s glad that at least it didn’t hit her in a more dangerous spot, like in the face.

The two of them were biking south around 11 p.m. on the Burke-Gilman Trail where it runs next to Seaview Ave NW near Shilshole Marina when someone in the rear seat of a car driving in the same direction shot “at least five times in a row,” she said:

We immediately stopped, and I sat on the ground trying to process what just happened and look at my leg. Dave immediately called the cops. They came pretty quickly, took my story, took pictures of my leg, it’s Incident #17-239632. They said they had reports of someone shooting something similar from a vehicle at houses & condos in the area too. So sounds like they shot at me on my bike, sped away, then shot at some houses too. Really terrible, I’m quite shaken up about it, definitely didn’t sleep well last night.

It sounds like the assholes who assaulted her went around shooting at homes in the area, so if you have any information you should contact Seattle Police and give them the case number above.

Keller is a business owner in Ballard and a strong advocate for safer streets. She has been a leader in neighborhood efforts to improve the sidewalks on the Ballard Bridge and, of course, to complete the Missing Link of the Burke-Gilman Trail that should run near her brewery.