This video letter from Peddler Brewing co-owner Haley Woods to city leaders about the terrible state of walking and biking on the Ballard Bridge is funny, strange and yet very serious. The tiny sidewalks further encroached by concrete pillars, the shin-high tripping ledge and the terrible bridge-end connections are completely unacceptable, especially for such a fast-growing urban hub like Ballard.

Well, don’t take my word for it. Watch the video:

As we reported previously, the city quietly released a report last year outlining some rough cost estimates for various sidewalk-widening options. None of the options stand out as a slam dunk as studied. The cheaper options are not all that cheap and would provide only small improvements. The more complete options were estimated to cost a gigantic sum ($20-48 million depending on various factors and options). But the report is at least a starting point to finding solutions. 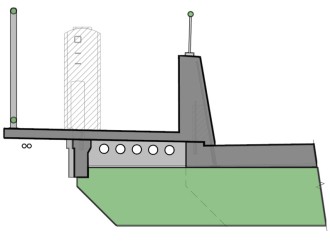 Example of what a larger sidewalk (Alternative 2) would be like.

There are definitely a handful of lower cost options the city can pursue immediately, such as fixing the tripping ledge and improving safety at the sidewalk entrances (especially the south end). We also suggested that the city study more options, ranging in cost from a more affordable on-road bikeway concept to a much more costly (and awesome) separate walking and biking bridge next to the existing structure.

It’s also possible a transit/bike/walk bridge could be an option for a crossing of the ship canal once Sound Transit finally gets around to building that high capacity connection from downtown to Ballard. But that crossing may not even be near the Ballard Bridge and may be a tunnel instead. And even if it does include biking and walking space, we cannot wait that long to make the Ballard Bridge safe.

There has been little movement from the city since the report was released. Haley and the Cascade Bicycle Club backed Connect Ballard team want to change that. Here’s what she says you can do to help:

Now it’s your turn to get involved! Share you Ballard Bridge story and why you think the sidewalk should be improved. Contact:Mayor Ed Murray
Via seattle.gov website