The Ballard Bridge is awful for biking and walking. That’s been well documented. And the solutions studied to retrofit the bridge to make it better for biking and walking carried one hell of a price tag, perhaps somewhere in the $20–$40 million range. That price means that even if the city finds the cash, those changes aren’t happening any time soon. And this bridge needs to be bikeable and walkable now.

We asked in our original post: Is there an easier way? Well, the Cascade Bicycle Club-organized Connect Ballard team has answered, producing an excellent video and document (PDF) outlining some easier and cheaper fixes, as well as a brilliant funding mechanism for major bridge investment. Some of these fixes could happen tomorrow, while others would need some more serious planning.

I’ll go into the ideas below, or you can just listen to Haley Woods from Peddler Brewing explain it:

First, the short wall separating the sidewalk from the general traffic lanes is incredibly dangerous. People have fallen over the rail trying to navigate the very skinny sidewalk. Terry McMacken died in 2008 after a long struggle to fight injuries he sustained more than a year earlier when he fell over the short wall and was struck by a car.

Connect Ballard research shows this curb height was designed in 1937, when the bridge was made of wood and cars were smaller and slower. Needless to say, transportation has changed a whole lot since then, but this tripping hazard of a barrier has not.

Their solution would push the barrier out one foot and add a full railing to separate people on the sidewalk from the roadway. They also suggest shaving off the outer concrete wall and the concrete pillars that jut out into the sidewalk space. The city’s original study priced similar work at more than $22 million, though that just seems so high. Is there really no cheaper way to do this? 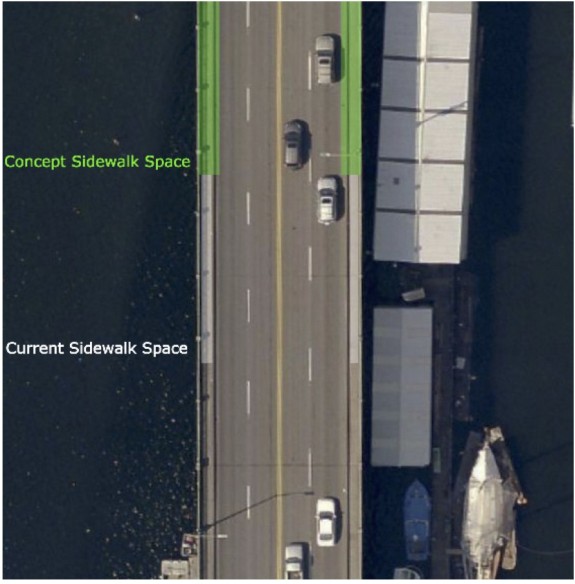 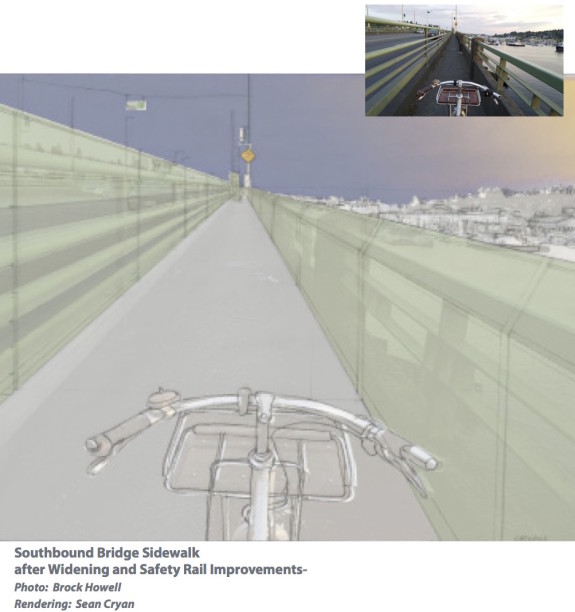 While we’re at it, there is a maintenance access stairwell that is caged off on the bascule (draw bridge) part of the bridge that creates a significant pinch point. Their simple solution: Make that a trap door instead. 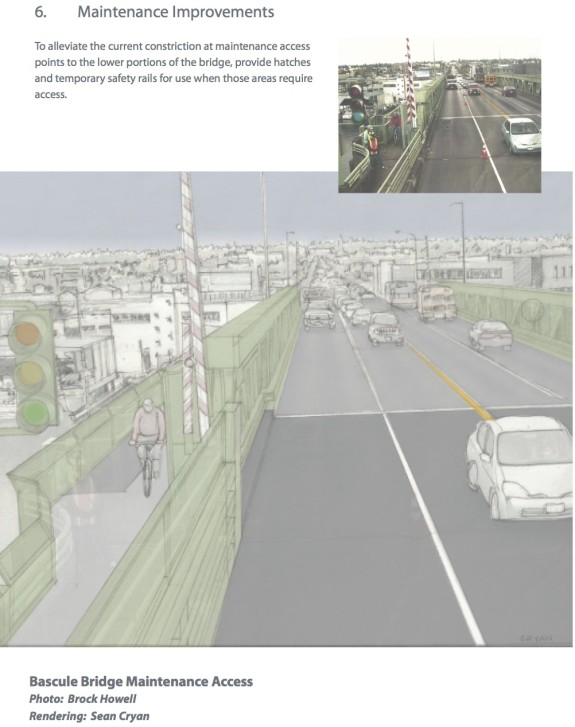 The next key piece is to fix the bridge access points. The north end changes appear relatively easy: 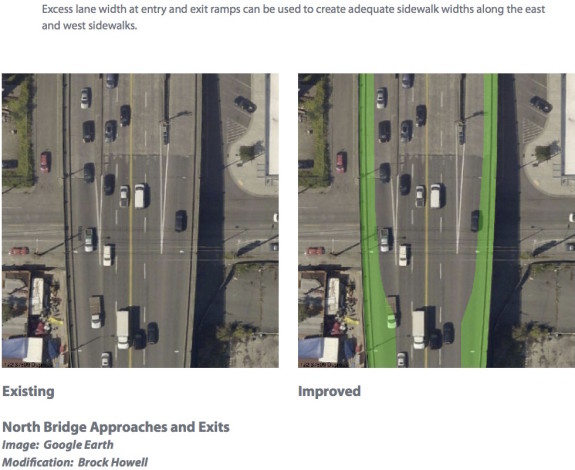 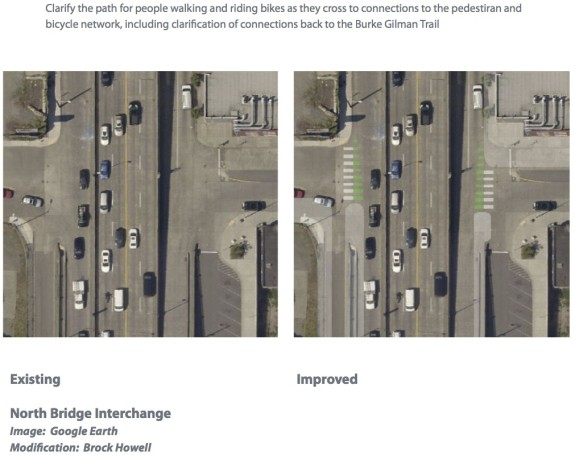 The south end requires a little more work. Basically, Connect Ballard suggests turning the south end of the bridge into a regular signalized four-way intersection at Emerson. Square it all off like a regular intersection, too, installing much-needed crosswalks.

There is already room on 15th for protected bike lanes from the bridge sidewalks to Dravus Street, which is a good connection into the neighborhood and to citywide and regional bike routes like the Elliott Bay Trail.

But this work wouldn’t be cheap, so they also have an idea of how to fund it: Remove the freeway-style Emerson/Nickerson overpass, which would no longer be needed thanks to the new signal. That overpass is also low enough over 15th that oversize trucks keep hitting it (Connect Ballard says a 2014 hit required a $5 million repair). Then that giant parcel of land currently wasted thanks to the off-ramp could be sold to finance these major improvements to the Ballard Bridge or a new transit/bike/walk crossing of the Ship Canal.

The signal would also reduce the need for the long access ramp from westbound Nickerson to southbound 15th, which could be repurposed as a trail connection to the Ship Canal Trail, saving about $18 million that the city’s study estimated a new trail connection would cost. 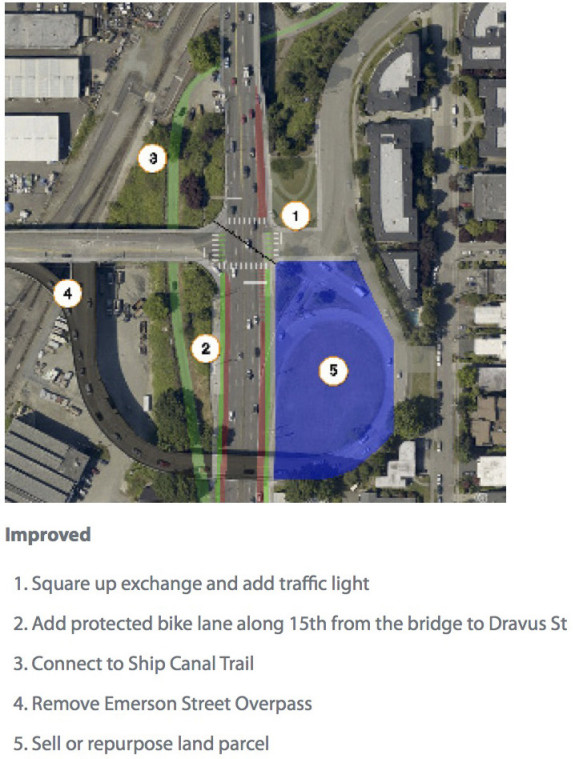 With the traffic signal in place, the city could then make each sidewalk one-way for bikes, eliminating the very problematic situation where two people on bikes approach each other head-on. There simply isn’t room to pass each other. This would also simplify the experience for people on foot, since bikes would only be coming from one direction.

Until the traffic signal and intersection redesign happens on the south end, flashing beacons (activated by a push button and maybe also bike detector) could be installed at the existing crossings to increase visibility of people on foot or bike at the so-called “Merge of Death” where the sidewalk ends and people on bikes get spit out into a fast-moving lane of traffic.

This is really great work by the Connect Ballard team, which is simply not willing to accept “we’ll fix it in the next decade or two” as an acceptable answer to the walk/bike problems on the Ballard Bridge. This bridge is a vital connection in an area that is growing quickly with no signs of slowing down.

Sean Cryan deserves a special call-out. No only did he put hard work into this project (including making the renderings), but he has been pushing hard for changes on the Ballard Bridge for longer than I have been writing this blog. He was on the Seattle Bicycle Advisory Board when I first started Seattle Bike Blog in 2010, and he was pushing hard for changes then, too (SDOT staff started referring to him as “The Ballard Bridge Guy”). And he hasn’t given up in the face of endless inaction. If the Ballard Bridge is ever safe for cycling, we will all owe Sean a huge thanks.