One year after Kung was killed, join a vigil and call for Vision Zero Friday 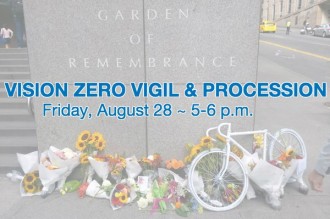 Traffic injuries and deaths are preventable, and we have the cure.

We’ve already planned Seattle’s safe streets upgrades corridor-by-corridor and neighborhood-by-neighborhood. The city’s traffic engineers have studied proven best practices from in town and around the world. The city is essentially holding the traffic violence vaccine in its hands, but we’re still scared to take it.

Join family members of traffic victims, city leaders and safe streets advocates Friday for a Vision Zero Vigil & Procession to remember those who have died in traffic and to raise the call for safe streets for everyone. Meet at 5 p.m. at 2nd and University (invite your friends via Facebook, more event details from Cascade Bicycle Club below).

When Sher Kung rode her bike to her office downtown one year ago this week, the final block of her commute required navigating what was commonly referred to as the city’s worst bike lane: A skinny paint-only lane in the door zone of parked cars and to the left of turning cars and trucks. Many people had been hit over the years, and people had been calling for a safer bike lane for a long time. Plans were in the works to finally fix it, but the city was ten days too late.

Kung died when someone driving a truck turned in front of her at University Street.

She was a new mother when she was killed. Her daughter has not yet turned two years old. 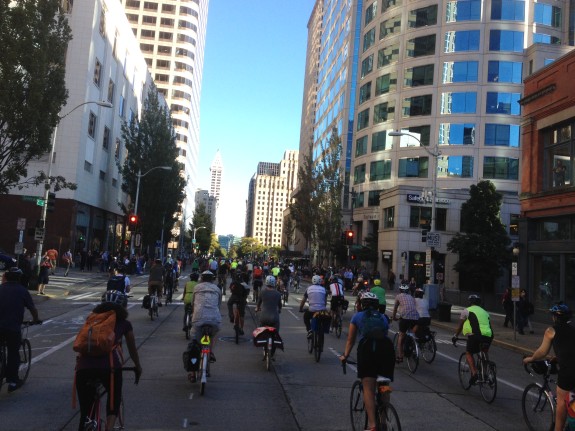 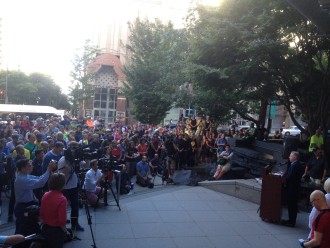 Kung was dedicated to working as an attorney for civil rights. She played a big role in the case to reinstate Margaret Witt, who was discharged from the military under Don’t Ask Don’t Tell. That case was instrumental in getting US military policy changed, allowing service members to be themselves and love who they love without fear of getting kicked out.

Kung died next to Seattle’s Garden of Remembrance memorial to fallen soldiers, a fitting place for friends, family and those she has inspired to remember her and her work for the dignity of service members.

It’s also a fitting place for the city to come together Friday to say, “Not one more.” From the bad driving decision to turn in front of her to a bad road design that encourages dangerous mistakes, Kung did not need to die, not that day.

Neither did Andy Hulslander.

Neither did Susie Dreher.

Neither did Haochen Xu.

Neither did Michelle Jozefiak.

Neither did Eric Renz.

Neither did Caleb Shoop.

Neither did Sandhya Khadka.

Neither did James St. Clair.

Neither did Rebecca Scollard.

Neither did Leo Almanzor.

And those names are just a handful that we have written about or that Seattle Neighborhood Greenways has held memorials for since January 2014. Like Kung, Each one of the people listed had their own life stories and communities and family who loved them.

Every year, about 150 people are seriously injured and about 20 people are killed in traffic collisions just in Seattle. Traffic collisions are a leading cause of death, especially for young people. And those who survive are often left with lifelong challenges that affect relationships or their ability to continue their previous work.

We’ve heard from nearly every city elected official and City Council hopeful that safe streets are vital both for public health and for addressing the transportation crush in our growing city.

And though the city has embarked on some quality projects here and there, efforts to-date have only reached a small percentage of our city’s many dangerous streets. We need big, bold action with real funding.

We have an incredible chance this fall to bring that funding: Move Seattle. Learn how you can get involved to help pass Seattle Proposition 1 in our previous story.

But even with all the funding in the world, making our streets safer for everyone is going to take political leadership. And it takes people like you demanding change to push leaders to make the right calls.

Friday’s vigil should be the last ever vigil or memorial for traffic deaths. Sadly, it won’t be. But with enough pressure from people like you, our city can take the kind of bold action we need to eradicate traffic violence by at least 2030. And we’ll make Seattle a better place while we’re at it.

Details on the vigil from Cascade:

This Friday marks the one-year anniversary of Sher Kung’s death.

Sher was a mother, civil rights attorney and a beautiful friend to many. On the last Friday of last August, she was biking down the prior minimal separation bike lane on Second Avenue when a driver of a delivery truck turned left across her path, killing her immediately. The city installed the new protected bike lane just 10 days later.

Since Sher’s death, traffic collisions have killed another 10 people and seriously injured approximately 150 people. It’s time for the traffic violence to end. That’s why people who walk, bike, ride transit and drive will gather this Friday to honor them and call for swift action. Please join us.

All people deserve to arrive at their destinations safely, no matter how they choose to get around. And we know that our city leaders can design our streets to be safe.

That’s why we’re excited about the city’s goal of zero traffic fatalities and serious injuries by 2030, and Mayor Ed Murray’s Vision Zero Action Plan to help us get there. The city’s plan for complete streets, including a network of protected bike lanes, in the Center City will also be essential. But more must be done to fund, design and enforce safer streets.

We will gather at the Garden of Remembrance this Friday at 5 p.m., starting with a moment of silence and bell ringing to remember Sher Kung and all those who’ve been killed or seriously injured in traffic violence in the last year. We will hear from the families, advocates and city councilmembers. To finish, we will walk and bike down Second Avenue to Occidental Park.

Seattle is not alone in this movement for an end to traffic violence. New York City held a Vision Zero vigil last month. Watch the StreetFilms video here:

16 Responses to One year after Kung was killed, join a vigil and call for Vision Zero Friday