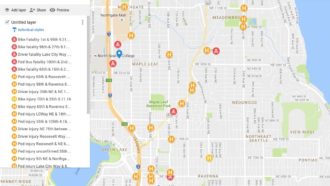 Snapshot of recent traffic deaths and serious injuries in NE Seattle, from SNG.

Seattle Neighborhood Greenways groups are organizing their second memorial event in as many weeks, this time in Northgate.

It’s been an awful couple weeks of traffic violence in the area. Last week, Central Seattle Greenways hosted a memorial walk on Capitol Hill for Max Richards, who was struck and killed while walking his dog.

Last month, RC Rogers died while biking in a mysterious crash near his NE Seattle home.

Days later, someone driving a pickup struck and killed a man biking near Northgate Mall. That man’s family has requested privacy, and we are respecting their wish.

Wednesday, a 75-year-old woman was struck and killed crossing a street in Bellevue.

Our deepest condolences go out to all their loved ones.

But condolences aren’t enough. It’s clear we are not acting quickly enough to keep people safe as they travel around the city and region. Traffic deaths and serious injuries are preventable, and both Seattle and Bellevue have set the goal of eliminating them. Well, we can’t wait any longer.

In the immediate term, Seattle Neighborhood Greenways is pressing the City Council and Mayor to add $3 million to the city’s Vision Zero budget, more than doubling the proposed amount. This would give the city the ability to implement more improvements to known danger spots all around the city.

Seattle’s Vision Zero team has a very successful track record for reducing injuries and deaths through safer street designs. SDOT has a strategy and team that works, so let’s double down.

More details about the memorial and rally from the facebook event (invite your friends):

Call on Seattle City Council to fund $3 million in safety improvements in 2017.

Join Lake City Greenways, NE Seattle Greenways, Green Lake Greenways Licton-Haller Greenways Greenwood-Phinney Greenways Maple Leaf Greenways and many other community groups and people to highlight the unsettlingly high numbers of serious injuries and fatalities on our streets in the past year.

We’ll gather on Sunday, October 9 at NOON in front of the Northgate Community Center to talk about the urgent need for safe streets.

***What: Rally and Remembrance
***Where: Northgate Community Center 10510 5th Ave NE
***When: Sunday, October 9 at NOON
***Who: People who care about safe streets in their neighborhoods

There have been two tragic bicycle fatalities and a spate of serious-injury pedestrian, bicycle, and car crashes in North Seattle in the past few months. Lives have been taken and others irrevocably altered by these events.

Gather with us, your North Seattle Greenways groups and Seattle Neighborhood Greenways, as we mark these tragedies and needless injuries. Call on the City Council to add $3 million to the budget.

We need to implement safety improvements on major streets in our city, including NE 65th, Lake City Way, Greenwood Ave N, 35th Ave NE, and many others.
Seattle Department of Transportation must also tackle a backlog of 400 spot improvements across the city identified by communities and SDOT for which there is currently little funding.

Our October 9 gathering will be followed by a walk/slow ride to the site of a recent crash.

Please bring flowers from your own garden, or a homemade sign with your message about safe streets. We will have ready-made signs, a map for you to add your ideas and trouble spots, postcards for your messages to the City Council, and a petition (also available at http://bit.ly/2dp6hUR).

Please pass this event on — we hope to see you there.

2 Responses to Sunday: Join a memorial for recent victims of traffic violence, rally for safer streets