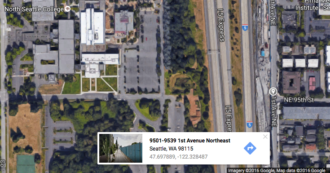 Approximate location of the collision. Image from Google Maps.

A man biking on 1st Ave NE near NE 95th Street was struck and killed by a man driving a pickup yesterday around 4:20 p.m., according to Seattle Police.

Both men were headed southbound in the area, which is adjacent to the construction site for the Northgate Link Station. We will update when we learn more.

Our condolences to this man’s loved ones.

At approximately 4:20 pm, a bicyclist was riding southbound on 1st Avenue NE approaching NE 95th Street when he was struck by the driver of a Ford F350 truck travelling in the same direction.

The cyclist sustained life-threatening injuries and was transported to Harborview Medical Center via Medic One.  The victim was pronounced dead at the hospital.

The 50-year-old driver of the truck stopped near the scene and was contacted by police. Detectives identified, interviewed and released the driver after finding no signs of impairment. Traffic Collision detectives continue to pursue the investigation. The department will provide updates on this case as they become available.

This entry was posted in news and tagged deaths. Bookmark the permalink.