City on track to build 5.4 miles of neighborhood greenways this year 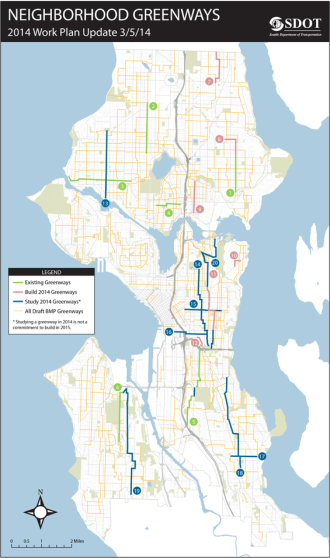 The city’s neighborhood greenway plans are moving ahead on schedule, with 5.4 miles of improved residential streets ready for construction in 2014 and another 18 miles in the planning stage.

Meanwhile, Seattle Neighborhood Greenways continues its work inspiring neighbors across the region to change the transportation conversation where they live.

While there are no south end routes ready to be built in 2014, the city is in the process of planning several ambitious routes in Rainier Valley and West Seattle. Hopefully, these will be shovel-ready in 2015.

Several of the 2014 projects are very short, but three are more than a mile long. Below is a look at the details.

I have written much about the Central Area Greenway, a so-called parallel neighborhood greenway that is part of the high-budget 23rd Ave Corridor Project. The city will build the 1.7-mile first phase of the project this year, traveling on streets east of 23rd Ave between Jackson and Columbia, then west of 23rd from Columbia to John.

The improved neighborhood streets will be great, but I maintain that this is a missed opportunity to dramatically improve bikeability on 23rd through a part of the city where biking is already very popular (and, full disclosure, where I live). It also sets a terrible precedent for so-called “complete streets” projects by suggesting that bike facilities can be skipped on busy commercial streets in lieu of a neighborhood greenway a block or two away.

Future phases planned for the next couple years will extend the project as far north as Roanoke St and as far south as Rainier Ave. Neighborhood greenway groups in Central Seattle, Montlake and Madison Valley teamed up with Cascade Bicycle Club recently to hold a community biking and walking event to determine the best (or, perhaps, least bad) greenway route at the hilly north end of the project area connecting Montlake to Capitol Hill/Central Area.

During the Silly Hilly, community members tried lots of different routes and came up with one that is as good as possible. But the Silly Hilly also pointed out the need for routes on both sides of 23rd/24th. And, as I have argued, points out the need for protected bike lanes on 23rd/24th, a currently-dangerous street that provides the flattest and most direct route.

You can watch the city’s presentation on the 23rd Ave Corridor Project and the Central Area Greenway here. 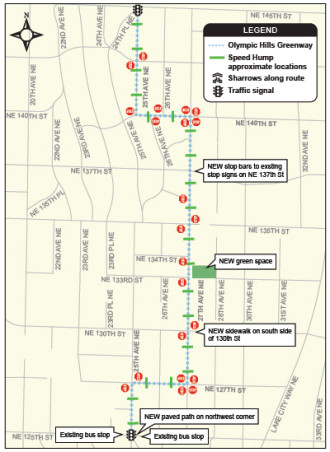 The second-longest route planned for construction in 2014 reaches the city’s northernmost border.

Lake City Greenways has been working hard to promote this and other road safety projects in the area while building community around the idea that Lake City can be a place where people of all ages and abilities can walk and bike to get around.

They have also been helping to establish new green space along the route, which has not happened along other routes in the city.

The 1.1-mile neighborhood greenway along 12th Ave NE in the University District will connect Ravenna Boulevard and Campus Parkway.

Importantly, the project will improve the notoriously dangerous crossings at NE 50th Street. Half of all collisions that occur on this stretch of 12th happen at 50th.

We reported previously that UW construction on Maple and Terry Halls will include a pathway to the Burke-Gilman Trail, but that may not be true, at least for people biking. If not, the city will need to look at a protected bike lane on Brooklyn to complete the connection.

This would be a worthy project either way, since the crossing of Brookyln and Campus Parkway continues to be dangerous for people on bikes.

The connection to Ravenna Blvd will also need some creative work. 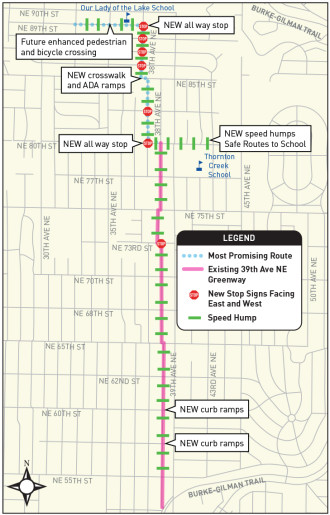 The 39th Ave NE neighborhood greenway is getting an extension to NE 89th Street, including new spurs to connect to area schools.

The city is also going back to the original stretch and adding speed humps and stop signs that probably should have been part of the original design. 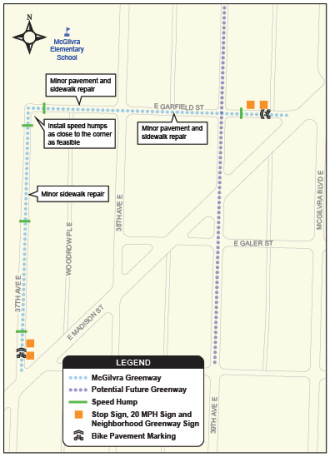 It would also connect to a potential north-south greenway route in the neighborhood. 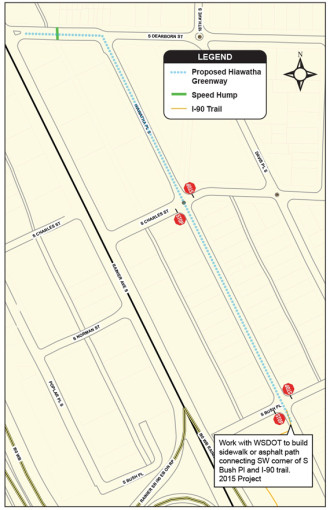 The Hiawatha Greenway will also be a short 0.3-mile route in Jackson Place the connects Dearborn and the I-90 Trail. Already well-used by people biking between downtown and the trail, the upgrades will slow the sometimes scary cross-traffic on this short street that passes behind the Artppace Hiawatha lofts (home to The Bikery).

This entry was posted in news and tagged construction, neighborhood greenways, sdot. Bookmark the permalink.

20 Responses to City on track to build 5.4 miles of neighborhood greenways this year