More details on planned improvements at Rainier and Dearborn 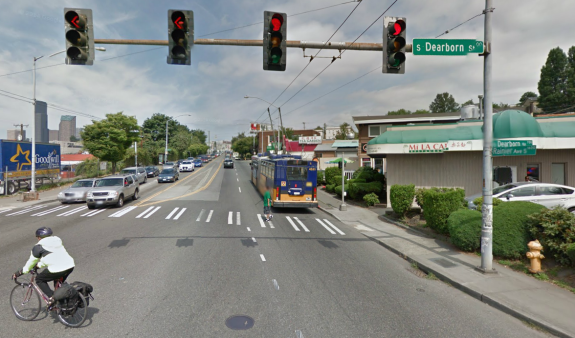 Yesterday, we posted about the city’s planned Neighborhood Street Fund improvements. Among the list of new sidewalks and better street crossings was this item:

Dearborn and Rainier is an absolutely terrible intersection, and a big problem spot for a major bike route into downtown. The city already has plans for a neighborhood greenway on Hiawatha, a low-traffic street that connects to the I-90 Trail.

The NSF project is not the high-budget remake of the intersection that is needed, but it’s a nudge in the right direction. 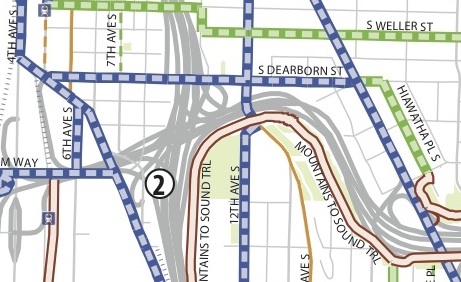 From the Bike Master Plan. Rainier is the blue line parallel to Hiawatha.

Dearborn has inadequate paint-only bike lanes for such a busy street with freeway ramps. The Bike Master Plan calls for protected bike lanes on the street, which will likely be a major project.

In fact, after downtown itself, protected bike lanes on the north end of Rainier (MLK to Jackson) and the Dearborn connection to downtown might be among the most important major projects in the entire master plan. It would open up a lot of Rainier Valley bike route options that do not exist today, and it would make a very dangerous and uncomfortable street safer for everyone.

The Neighborhood Street Fund improvement will not fix the problem, but it will make the northeast sidewalk much more comfortable and make it easier for people on bikes to trigger the light.

The goal of the proposed improvement is to resolve the conflicting movements of pedestrians, cyclists and vehicles at the NE corner of Rainier and Dearborn. This is a location where congestion often occurs, especially with passengers waiting at the #7 bus stop.

The original proposal included several elements – re-aligning the crosswalk, curb cut and pushbutton closer to the corner, moving the light pole to the side, widening the sidewalk, and adding markings/signage for the bicycle signal loop for crossing Dearborn.

Our preliminary analysis recommends narrowing the outside northbound through lane on Rainier Avenue S to 12 feet to provide a wider sidewalk between the existing Metro transit shelter and the intersection. We are currently at 10 percent design and expect the remaining modifications to be finalized later this year.