In 2017, central and south Seattle could be covered in neighborhood greenways 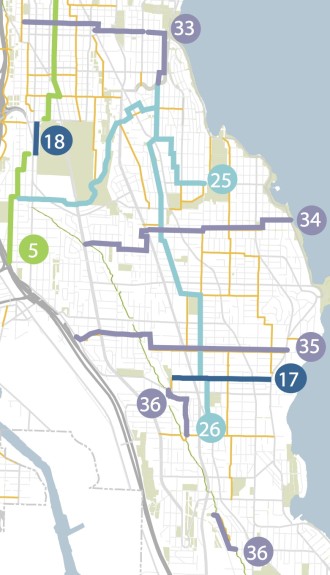 South Seattle will be the biggest focus for neighborhood greenways in the next couple year. See full map below.

As we reported yesterday, Seattle’s neighborhood greenways are attracting a whole lot of people on bikes. One route in Ballard even led to an 805 percent increase in people biking on the street in just the first year of operation.

And the city is just getting started.

After a couple years trying to figure out how to put the pieces together to build neighborhood greenways effectively, Seattle has finally hit its stride. The city is on track to build 5.4 miles of neighborhood greenways by the end of this year (like this one in Olympic Hills), but they have many more miles in the planning and outreach pipeline.

SDOT released their updated workplan this week, which gives a rough look ahead at which routes will be built and planned next. And while West Seattle and the north end get some love, the majority of routes are focused in central Seattle and Rainier Valley.

South Seattle has long been left out of safe streets improvements seen in many other parts of the city, so it’s no surprise that the area is home to some of the most dangerous streets in Seattle. For people on bikes, there are very few direct and comfortable routes, especially compared to neighborhoods north of the Ship Canal. Since Rainier Valley has a more diverse and lower income population, the city’s failure to make the streets safe and connect bike routes raises serious questions of equality and social justice.

Just over one year ago, Trevon Crease-Holden was walking his little brother across the street when someone driving struck him and then fled the scene. The person responsible has not been caught. Crease-Holden, who should be getting ready for his sophomore year of high school is instead fighting slowly to recover from a serious brain injury. KOMO caught up with him and his family to see how he’s doing one year later:

The city’s updated Bike Master Plan includes a framework for selecting priorities for investment, and equity is one of the most important factors. So, as could be expected, the lion’s share of high-priority neighborhood greenways are in Rainier Valley where few safe routes exist today.

One of those routes, scheduled for study next year, crosses MLK at S Walden Street where Crease-Holden was struck.

Below is the map and plan through 2016. Every route is subject to change based on feedback gathered during community outreach. Routes marked for study will be on track to be built the following year if everything goes smoothly. 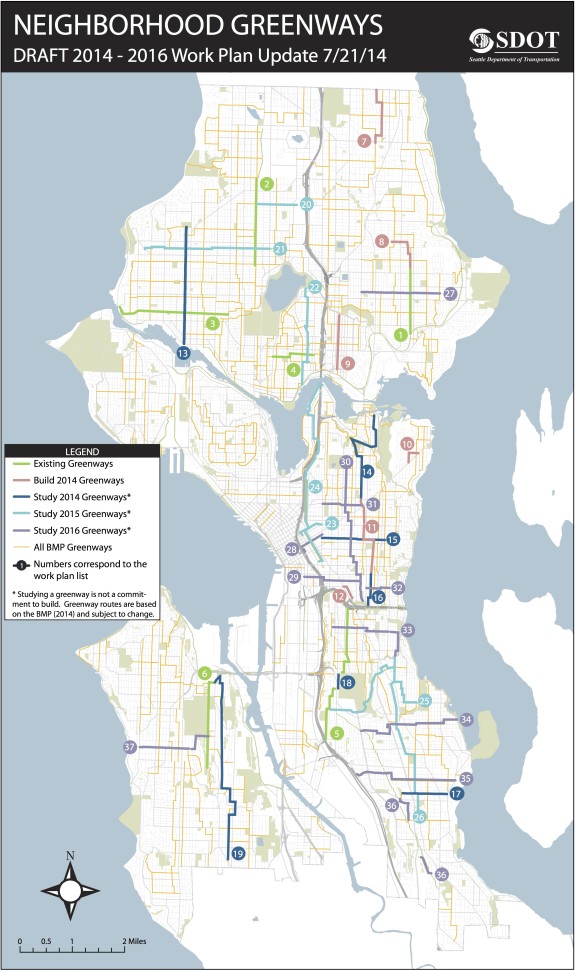 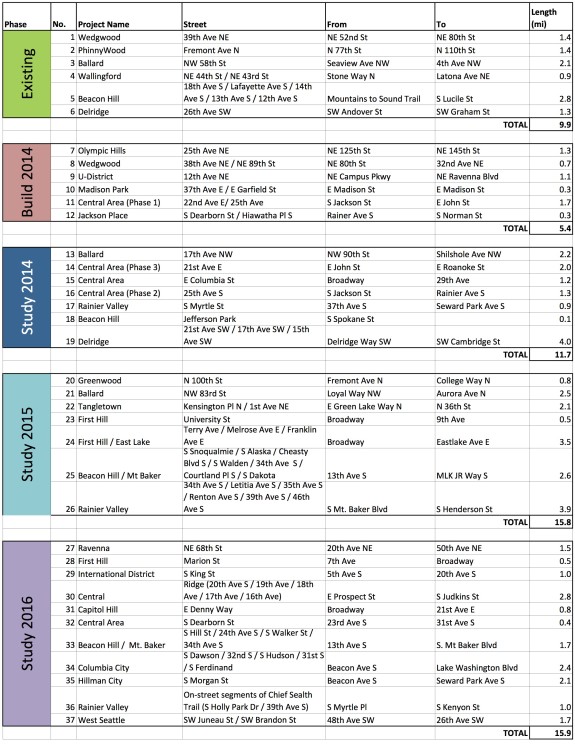 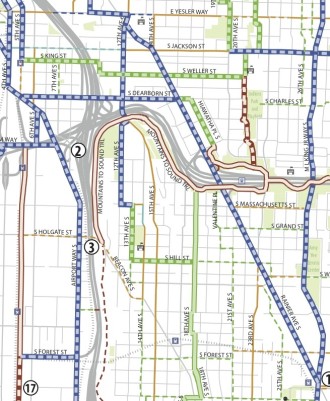 Seeing this network of neighborhood greenways in Rainier Valley is very exciting. It also makes a strong argument for making a Rainier Avenue-to-downtown protected bike lane a high priority project for the city. The Bike Master Plan calls for protected bike lanes on Rainier from MLK to 12th Ave with a connection to downtown via Dearborn and 4th Ave.

This would be a rather high-budget project, but it is the only way to activate these neighborhood greenway investments and provide a comfortable connection to downtown. Other than safe bike lanes within downtown itself, this Rainier connection should be at the very top of the city’s high-budget bike project list. While I would love to see it happen sooner, 2017 seems like a good deadline to have a fully complete connection between these planned neighborhood greenways and downtown.

Other notable and interesting projects on the list include:

7 Responses to In 2017, central and south Seattle could be covered in neighborhood greenways