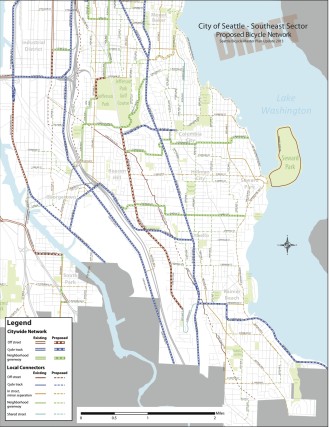 Equity is one of the key factors driving creation and prioritization of the Bike Master Plan update. And while that might seem like a no-brainer — everyone deserves safe streets — a story today by Eric Scigliano at Crosscut points out many of the ways that implementation of bike facilities since passage of the 2007 Bike Master Plan have skipped the city’s lower income neighborhoods.

The story first points to the types of facilities installed and concludes that the miles and miles of sharrows installed on busy city streets really only helped the strongest and most fearless people on bikes — if they helped anyone at all.

But then the stories turns its gaze to southeast Seattle, showing how the 2007 plan not only included fewer projects for the Rainier Valley, but that the most useful projects — MLK and/or Rainier Ave — have yet to be implemented.

But, of course, it’s not just safety and access for people on bikes that has been neglected in Rainier Valley:

The disregard for South End bicyclists and pedestrians extends far beyond the master plan. Last February and March, student researchers from the UW School of Public Health studied signals and street-crossing conditions on three arterial stretches with similar traffic volumes: NW Market Street in Ballard and Rainier Avenue in Columbia City and Rainier Beach. They found that Columbia City, whose population is 33 percent white, had the most pedestrian fatalities and collisions, closely followed by Rainier Beach, which is 25 percent white. Rainier Beach had the most jaywalking. But in Ballard, which is 85 percent white and has a median household income about 55 percent higher than both Rainier Valley neighborhoods’, “walk” signals lasted 10 to 60 percent longer relative to street width than they did in Columbia City and Rainier Beach.

“This means that in Ballard, pedestrians do not have to walk as fast to make it across the street successfully as they do in the Rainier Valley neighborhoods,” the authors concluded. More than a third of valley residents interviewed said they couldn’t get across the street in the time allowed. Given the short signals and many blocks between them there, jaywalking may be the most rational response.

Deb Salls, the executive director of the nonprofit Bike Works, which cosponsored the study, was shocked to find that SDOT officials weren’t shocked at these discrepancies. Just a glitch in the algorithm, she says they told her.

But, as with many other neighborhoods, residents in low-income areas are not always enthused about road safety and bike lane projects on their streets. We saw this with the Othello/Myrtle project, which pointed out how much more the city’s conversation about safe streets needs to be focused on equity. After all, if bike lanes are perceived as a white tool of gentrification imposed on low-income areas by the elites at City Hall, they are going to — rightfully — face resistance.

Adonia Lugo attempted to document a variety of opinions about bicycling and road safety in Rainier Valley through her Seattle Bike Justice Project. It shows that, especially in a neighborhood with so many cultures and people from countries across the globe, opinions about bicycling vary widely. Before a strong, neighborhood-centered movement for safe streets in Rainier Valley can be developed, there need to be a lot more chances for people of all cultural backgrounds to get together and talk and work together.

Bike Works has long been that place, but now efforts are growing through Rainier Valley Greenways to engage even more residents. In fact, the group’s fancy new website is almost entirely geared around gathering people’s thoughts on road safety on the streets near their homes.

Forterra has observed the Seattle Neighborhood Greenways model of resident-organizing and is beginning to use the methods to reach out to residents in Federal Way to engage citizens about safe streets and neighborhood greenways there. And because Forterra has resources a low-budget resident group doesn’t, their outreach efforts in Federal Way includes lots of translation work to reach even more cultures.

Will the new Bike Plan be better?

So, will the new Bike Master Plan be better about equity? It certainly aims to be better, but whether that is put into action on the ground is yet to be seen.

However, at a recent meeting of the Seattle Bicycle Advisory Board, Bike Master Plan update team members gave presentation about their still-developing prioritization system. Through a complicated algorithm the weighs factors from network connectivity, density of destinations and equity, many of the projects that scored the highest were in southeast Seattle. So while the system is still in-development, it appears that the equity measure will, indeed, raise the prioritization of Rainier Valley road safety.

But the City Council and SDOT will still have discretion over the projects that actually happen. So even if the plan suggests that protected bike lanes on Rainier Ave S from the Skyway border to Rainier Beach is the top project, will the city leaders make it happen?

For more of our thoughts on needs in Southeast Seattle, see post 1 and post 2 about the Bicycle Master Plan drafts.