The city is catching its groove on neighborhood greenways this year, setting a pace for installing and planning them in all corners of the city simultaneously.

While neighborhood greenways so far have been somewhat experimental and one-off projects, 2014 is set to be the year where — with the help of SDOT Community Liaisons Dawn Schellenberg and Emily Ehlers — the city hits a consistent pace with outreach, design and construction happening on several different projects. With the new system, the city should be able to ratchet up the number of these projects it can get on the ground each year and improve the public outreach process so neighbors have a chance to weigh in on their safety problems early on.

Instead of coming into a neighborhood with a set plan and trying to sell it to a potentially skeptical crowd, the new process includes an initial listening session where neighbors can tell the city what safety problems exist (“I can’t cross this street safely,” “people speed down this residential street to avoid traffic on the main street,” etc). Then, after analyzing the public feedback and looking at city-wide bike and walking route connectivity, the city will return to the neighborhood with a neighborhood greenway plan that addresses the biggest needs. Neighbors — who now have a sense of ownership on the project — then have another chance to weigh in before construction begins.

There are currently 13 projects in the study or construction phases for 2014 and 2015, including two routes in Rainier Valley, one in West Seattle, three in northeast Seattle, one in Ballard and six in central and eastern neighborhoods.

Here’s the work plan (exact routes and installation schedule are subject to change):

While Seattle is finally figuring out how to expand the neighborhood greenway network, Portland is largely dropping their impressive efforts, citing budget issues. From Bike Portland:

The city’s decision to nearly eliminate local funding for neighborhood greenway construction isn’t due to any conscious opposition in the Portland Bureau of Transportation. At every level, PBOT officials are proud of the program and eager for it to resume.

Instead, it’s a sign of just how severe PBOT’s revenue crunch is — and of the sacrifices the city has made in order to fulfill the $100 million commitments of former Mayor Sam Adams to the new Sellwood Bridge and Orange Line MAX, and also Mayor Charlie Hales’ $11.3-million promise to change PBOT’s image by paving — or in many cases, as it turned out, fog-sealing — 100 miles of city streets.

Meanwhile, Seattle went from zero in 2010 to now building two-to-three times as many miles as Portland with no plans to slow down until every home is within close distance to either a neighborhood greenway, trail or protected bike lane.

This momentum is due in large part to the enthusiastic and ever-growing neighborhood greenway groups around the city, and the growing support system provided to these groups by the Seattle Neighborhood Greenways umbrella organization. Led by Cathy Tuttle and staffed by Gordon Padelford, SNG helps the neighborhood groups identify needs and opportunities to make an impact or apply for grants. Since each neighborhood group is run by volunteers who may not be fully plugged into the political machinations in the city, the support from Tuttle and Padelford is invaluable.

By the end of 2015, a neighborhood greenway network will finally start to appear. What were lone sections here or there will start to make sense in the context of the city’s bike network. It will also become apparent where the most-needed sections of protected bike lanes and trails are to help people get through areas where neighborhood greenways are not possible (often, this means crossing between neighborhoods, which often act as little “islands of bikeability“).

With miles of neighborhood greenways in nearly every part of town, protected bike lanes downtown and the launch of Puget Sounds Bike Share all on the horizon, Seattle’s bike boom is just getting started.

UPDATE: Here’s the work plan with mileage included, from SDOT: 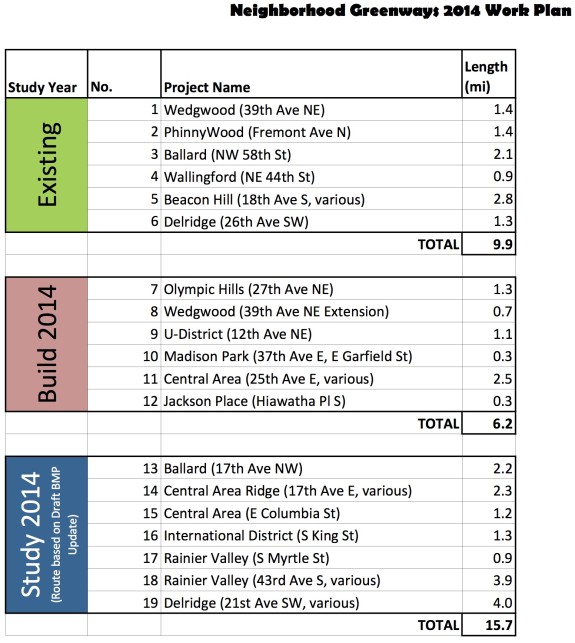